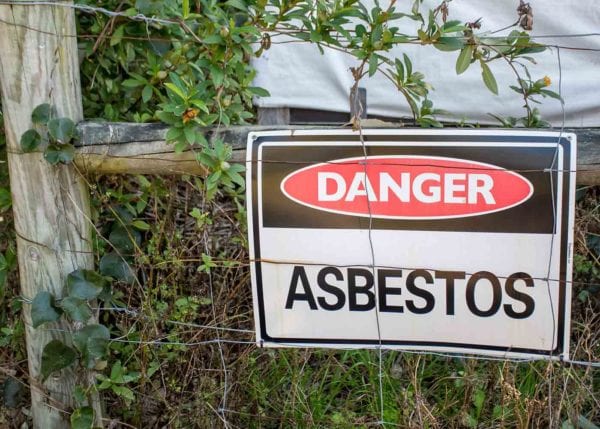 Asbestos Exposure in the U.S.

Asbestos has a long history of use in the U.S., dating back centuries. For years, the toxin was seen as a “miracle” mineral for its accessibility, durability and heat resistance. Because the mineral was prevalent naturally, it was a cheap additive to numerous products as a means of fireproofing.

Though asbestos is regulated today, it is still not fully banned in the country, putting the public at risk of exposure. Certain states also have a high prevalence of natural asbestos, which could present a risk if disturbed in some way. Select a state below to learn more about the asbestos exposure risk.

Asbestos Exposure Across the United States

No amount of exposure to asbestos is considered safe, and anyone can be at risk because of its heavy past use. Asbestos still remains in many old buildings, homes and schools built before 1980, and can also still be found on countless jobsites in various industries across the country. Some sites have even been deemed Superfund sites by the Environmental Protection Agency (EPA) for cleanup plans to remove dangerous asbestos and other toxins.

Until there is a ban and better cleanup efforts across the country to remove the mineral from industry uses and old buildings, understanding where to find asbestos is the best way to prevent exposure and the dangerous diseases it can cause, like mesothelioma.

Occupational Asbestos Exposure in the U.S.

Around the world, researchers have noted that the most prominent cause of mesothelioma and asbestos exposure occurs on the job. Occupational asbestos exposure is estimated to affect at least 1.3 million Americans each year, with 125 million people globally exposed at work every year.

Asbestos has been utilized heavily across numerous jobsites in industries including construction, shipyards, automotive, industrial plants and more. While occupational exposure is a significant risk across the nation, researchers have noted higher rates in certain states because of the prevalence of more high-risk industries. For example, New Jersey and Michigan have a high incidence of occupational exposure because they have among the most citizens employed in the industrial sector.

Occupational exposure can also put loved ones of workers at risk. Secondary exposure can occur when workers unknowingly bring home asbestos fibers on their person. One of the most studied instances of secondary asbestos exposure occurred in Libby, Montana, and stemmed from the W.R. Grace mine in the city. One study found living with an asbestos worker was among the greatest indicators of pleural abnormalities among Libby residents.

Environmental exposure to asbestos occurs when naturally occurring asbestos is disturbed, often during construction or weathering. Natural asbestos can be found in soil across the United States, most notably in California. If this asbestos becomes disturbed, it can become airborne and put residents near the area at risk of exposure.

States with the Most Naturally Occurring Asbestos

In addition to naturally occurring asbestos, asbestos-containing products within the home and public buildings contribute to the environmental asbestos exposure risk incurred by Americans. One area of concern is the asbestos risks in schools across the United States. According to research done by Senator Edward J. Markey from Massachusetts, it is believed that two-thirds of public schools still contain asbestos products. This puts school children, teachers and others working in the buildings across the county at risk of asbestos-related diseases.

A third pathway for environmental asbestos exposure includes exposure from proximity to asbestos mines or plants. Related exposure stemming from the W. R. Grace mines in Montana have been reported in Minnesota. Contaminated ore from the Libby mines was used in the W. R. Grace vermiculite processing plant in Minneapolis, and reports have noted elevated case numbers of mesothelioma among residents living near the plant.

While asbestos can be found across the country, the most common sources of exposure vary by region, according to the most common uses of the mineral. For instance, in coastal areas like Louisiana, exposure often occurs in shipyards. Conversely, inland and in landlocked states, such as Missouri or Ohio, risk of exposure commonly stems from chemical plants or oil refineries.

Asbestos in the Eastern United States

Residents of the eastern United States live among 331 natural asbestos sites. The sites largely follow the Appalachian Mountains, and larger urban areas have been built up around the natural occurrences. At one time, Americans flocked to the region because of the promise of employment in the asbestos mines.

In addition to the naturally occurring asbestos on the East Coast, exposure may also occur due to the history of large industry in the region. Asbestos exposure has been reported in shipyards, power plants and in construction areas across the coast. Construction sites are a major issue in larger metropolitan areas on the East Coast, such as New York City and Boston. These eastern cities grew rapidly before hazards related to asbestos were well known and continued to develop during years of peak asbestos usage. The constant updates to accommodate the growing populations creates a high risk for asbestos exposure. During the demolition or reconstruction of aging buildings, asbestos products may be disturbed, putting the workers and residents of the surrounding areas at risk of inhaling asbestos fibers.

Asbestos in the Central United States

Residents of the Central United States are at a lesser risk of exposure to naturally occurring asbestos, since there are only 26 natural asbestos occurrences in the region, fewer than the natural occurrences in just New Jersey and Pennsylvania. The two East Coast states each individually have more than 35 natural occurrences. While naturally occurring asbestos is sparse in the region, residents are still at risk of other sources of exposure. For example, occupational exposure is common in oil refineries, like Citgo Petroleum Illinois, and power plants, like Wolf Creek Nuclear Generating Station in Burlington, Kansas.

Asbestos in the Western United States

Western States with the Greatest Number of Natural Asbestos Occurrence

Similar to the other regions, occupational asbestos exposure is a great risk to residents of the western United States. Americans from the region who have worked in shipyards, ports, railways or manufacturing should discuss their risk of occupational asbestos exposure with their healthcare provider. Companies from the region known to have exposed their employees to asbestos include:

Asbestos exposure can happen to Americans living in any of the 50 states. Those who may have come into contact with the toxin should contact a medical professional and have a discussion about their exposure history. A primary care physician will be able to direct patients to mesothelioma doctors in their state, if necessary.