Mesothelioma and Asbestos Exposure in Kansas 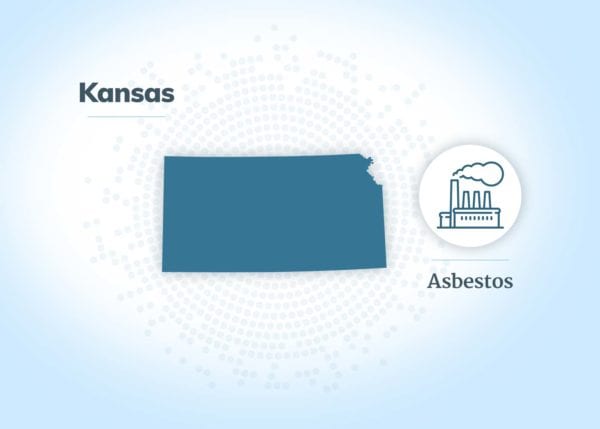 Kansas residents and visitors could risk exposure to asbestos at work, home, or in publicly accessible buildings.

Landlocked in the Midwest, Kansas does not have any shipyards, but there are plenty of other places where workers have been exposed to asbestos within the state.

One of the most serious sites of asbestos exposure in the state belongs to Farmland Industries in Dodge City. This process most likely used crocidolite (“blue” asbestos), which in addition to resisting heat and electricity is also resistant to caustic chemicals. Several other chemical plants throughout Kansas also have been known to expose employees to asbestos, including Harcros Chemical Company in Kansas City, Dupont Chemical in Topeka, and Vulcan Chemical in Wichita.

Kansas has a number of oil refineries that have led to asbestos exposure for workers. Asbestos was often used to contain and prevent fires in volatile environments, and employees have been exposed at a number of known locations, including Co-Op Oil Refinery in Lawrence, Apco Oil Corporation in Arkansas City, and Texaco Oil in El Dorado. El Dorado was also home to Frontier Oil, which is one of the worst job sites for exposure to asbestos in the state.

All over the State of Kansas, and the U.S. as a whole, power plants have historically caused lots of asbestos exposure for those who worked there, given the material’s use as insulation against electricity and heat. One of the most significant power facilities to expose its employees to asbestos was Wolf Creek Nuclear Generating Station in Burlington. Other notable sites include Coffeyville Municipal Light & Power, Sunflower Electric Corporation, and Kansas Power & Light.

One of the most abundant natural resources in Kansas is salt, and the city of Hutchinson has been a center for this much-used commodity. Some of this salt is processed for use as table salt, while much of it may be used as rock salt for roads in northern states during the winter. Asbestos could be found in various machinery and components used in the salt mining and manufacturing process. Some known salt companies to expose workers to asbestos include Barton Salt Company, Carey Salt Company and Morton Salt Company, all of which were located in Hutchinson.

Questions About Mesothelioma and Asbestos Exposure in Kansas?

While Kansas is home to a number of Superfund sites that have required cleanup due to contamination from oil, chemicals, and heavy metals, one site in particular is notable for its use of asbestos.

While the company was based in Kansas City, MO, Farmland Industries was at one time the largest agricultural cooperative in the U.S., and it held a number of sites throughout Kansas State. One of those was a chemical plant that primarily processed ammonia for use in fertilizer. Because asbestos helps to protect against chemical reactions, it has often been used in laboratories and processing plants, and the Farmland Industries plant was no exception. In 2004, Kansas Department of Health supervised a massive cleanup effort that included asbestos abatement at the site.

Learn more about asbestos exposure in the major towns and cities of Kansas by clicking on the links below. If you worked at any of the jobsites highlighted on these pages, there is a possibility that you may have been exposed to asbestos which is known to cause the terminal cancer mesothelioma.

Asbestos exposure is also a problem if you look beyond the major cities and towns in Kansas. Select a town to see the list of its job sites where asbestos exposure occurred. Asbestos exposure at any one of the work sites revealed could put a worker at risk to develop mesothelioma cancer.