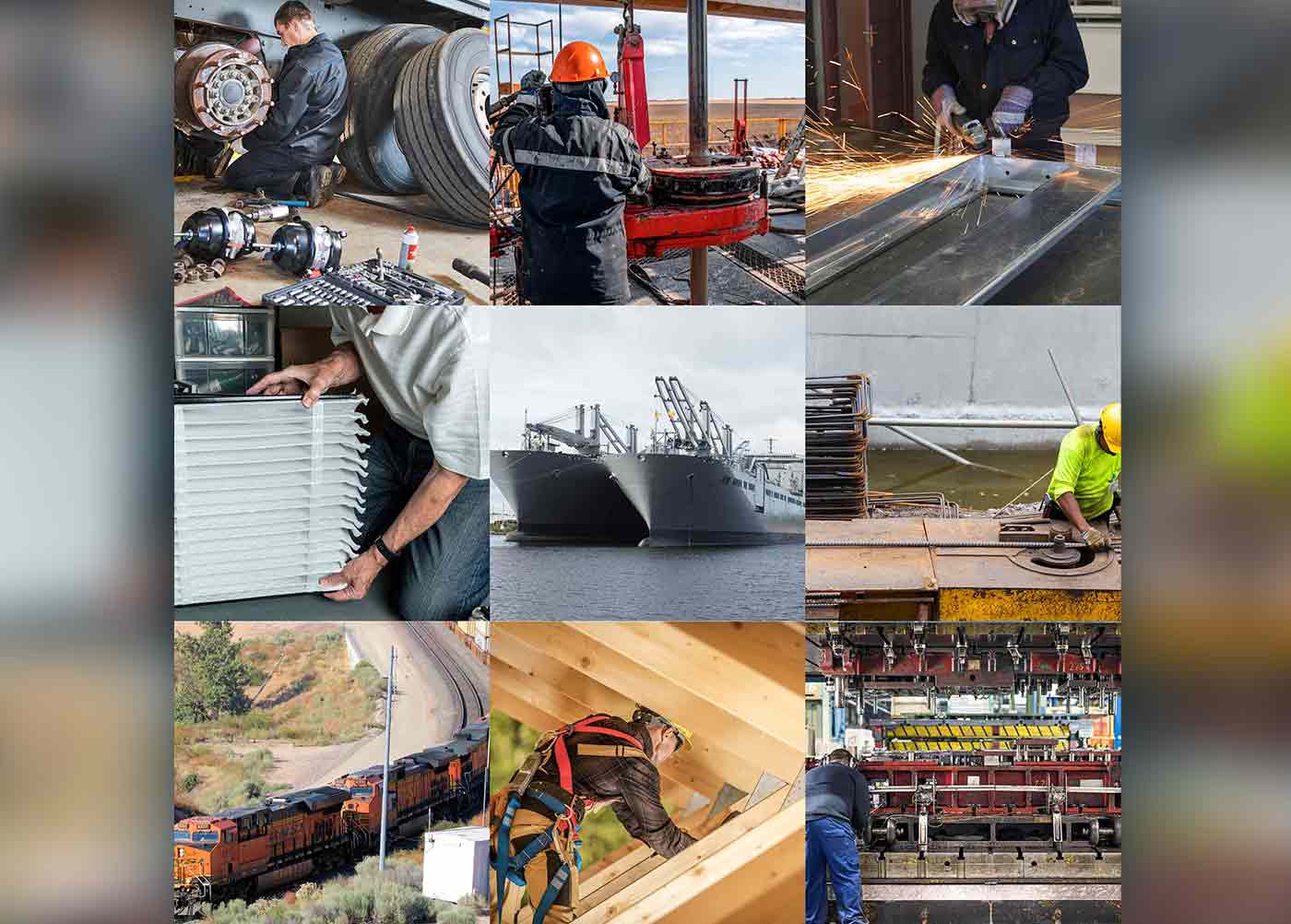 What Is Occupational Asbestos Exposure?

These workers are then at risk of developing asbestos-related diseases, such as mesothelioma. According to Centers for Disease Control and Prevention (CDC) data released in 2017, approximately 45,221 people died from mesothelioma between 1999 and 2015.

Workers at some jobsites may continue to face exposure risks. Those currently exposed to asbestos on the job may not be diagnosed with a disease for several more decades.

Individuals in high-risk occupations may repeatedly experience concentrated asbestos exposure at work. This puts these workers at a higher risk of developing an asbestos-related disease, such as mesothelioma.

Aircraft mechanics may have experienced asbestos exposure while servicing various aircraft systems. Asbestos was most commonly found in brake and landing gear systems. Some aircraft brake types contained up to 23% asbestos by weight. As a result, mechanics working around these systems may have been exposed to asbestos.

Auto mechanics may have come into contact with asbestos while servicing cars and replacing parts. Asbestos was frequently used in high-friction materials, such as brakes, clutches and heat shields. Replacing these parts requires removing the old components, which could release asbestos dust. As a result, auto mechanics may have inhaled asbestos fibers. These professionals may still come into contact with asbestos in older vehicles.

Boiler workers may have come into contact with asbestos while manufacturing, installing, servicing and repairing boilers. Asbestos was frequently used in many components of boilers and other HVAC equipment. The mineral was used to withstand the high temperatures of these systems.

The CDC notes employees in the construction industry are among those with the highest rates of asbestos exposure. An estimated 1.3 million construction workers come into contact with asbestos on the job each year. Construction workers often work inside older buildings and homes. These structures used the mineral for fire resistance and durability. Floor and ceiling tiles, joint compound, siding and plaster are all common asbestos-containing construction products.

Firefighters are among the most likely to come in contact with asbestos fibers. Asbestos exposure among firefighters occurs when fighting fires within homes and buildings built before 1980. These structures often contain many different asbestos products. Common asbestos products include insulation, tiling and roofing materials. Studies have shown firefighters are twice as likely to develop mesothelioma compared to the general public. The increased risk is largely due to repeated exposure while responding to emergencies.

HVAC workers, boilermakers and pipefitters all sometimes work in tight spaces where asbestos was used. These workers may risk exposure from working inside public buildings, residential homes and with large boilers. Workers in this industry may be exposed to high concentrations of airborne asbestos fibers while performing maintenance work or installations. HVAC workers may also risk exposure while repairing boilers installed decades ago that used asbestos materials.

These workers are often employed in factories and power plants, working in areas where high heat and chemical exposure are common. Workers may come into contact with asbestos while handling refractory products, gaskets and valves. Even protective clothing worn to resist high temperatures often contained asbestos. Because of the mineral’s prevalence in the workplace, many industrial workers are at risk of developing mesothelioma.

Machine operators work in factories and plants and often operate heavy equipment, such as bulldozers and cranes. Workers in these jobs frequently came in contact with high-friction asbestos products, such as brake linings. As machine operators perform their daily duties, asbestos fibers may release into the air. Airborne fibers may be ingested or inhaled. This exposure can lead to mesothelioma, asbestosis and other asbestos-related diseases.

Machinists use tools and machinery to make industrial parts. For many years, asbestos was added to machinery to improve durability. Machinists may have come in contact with asbestos at a variety of jobsites, such as on ships. They often worked in poorly ventilated boiler and engine rooms. Working conditions caused many machinists to experience asbestos exposure. Machinists may still risk exposure from old asbestos products.

Asbestos mine workers may have inhaled the mineral during the mining and packaging process. Asbestos is a naturally occurring mineral that was mined for decades in the 20th century. Workers in these mines experienced daily asbestos exposure. Studies show asbestos mine workers have extremely elevated rates of lung cancer and mesothelioma. Asbestos products may also have been used in other types of mines, such as coal mines.

Oil or petroleum refinery workers help process the fuels and oils Americans use every day. These workers often encounter asbestos inside of old electrical products, cement, protective clothing and thermal insulation. Research has shown workers in this industry typically face prolonged asbestos exposure. As a result, oil refinery workers have one of the highest mesothelioma mortality rates.

Shipyard workers often worked with asbestos-containing materials while building and repairing ships. Because of the risk fire poses to ships at sea, asbestos materials could be found almost anywhere on the vessels. For example, ships often had asbestos insulation, pipe coverings and valves. Due to the mineral’s wide use, shipyard workers are among the most at risk of developing mesothelioma and other asbestos diseases.

Teachers may have been exposed to asbestos in schools. Asbestos was used frequently in schools built before 1980. Some records indicate nearly a third of the nation’s schools may have been built with asbestos products. As school buildings age, older asbestos materials have begun to decay and release fibers. As a result, teachers may experience asbestos exposure.

Textile mill workers were often responsible for making, cutting and handling fabrics. Workers may have been exposed to asbestos while making asbestos fabrics. Studies show increased incidences of mesothelioma, lung cancer and asbestosis in textile mill workers compared to the general population.

Have a Question About Occupational Asbestos Exposure?

Although these occupations may not work with asbestos every day, it’s important to note there is no safe level of asbestos exposure. Medium-risk individuals may still develop asbestos-related diseases later in life.

Cement plant workers are responsible for mixing cement and manufacturing cement products. Asbestos fibers were added to many cement products for durability and temperature resistance. Cement workers may have been exposed to asbestos while mixing the cement or forming it into sheets and blocks.

First responders may come into contact with asbestos during rescue missions or disaster response efforts. Asbestos was frequently used in construction materials produced before 1980. Natural disasters and other catastrophes may destroy buildings and cause the release of these fibers. As a result, first responders may be at risk of asbestos exposure.

Merchant Mariners are associated with the U.S. Navy and spend much of their time aboard ships. During World War II, many Merchant Mariners were exposed to asbestos while performing repairs and other maintenance away from port. The mineral could be found throughout the ships, especially in boiler and engine rooms due to the heat generated in those areas. Due to the high rates of asbestos exposure, one study of 3,000 Merchant Mariners discovered lung abnormalities in about 40% of those workers.

Asbestos was often sprayed on metal beams for fire resistance and attached to metal materials bent, drilled and shaped by metal workers. The mineral was also found in welding rods used by welders and in the plaster that lathers sanded. Metal workers could also face exposure from asbestos in protective clothing, including inside gloves and blankets.

Asbestos was used in paper mills during the pulp-drying process. Paper mills used asbestos felt to assist in the high-temperature drying process. Workers who oversaw these processes or serviced the drying equipment may have come into contact with asbestos fibers.

Plumbers, pipefitters and steamfitters may experience asbestos exposure from pipe systems and other materials. Pipes, valves and other plumbing products commonly contained asbestos. The mineral was used to make pipe systems resistant to heat and corrosion. Plumbers maintain and repair pipes in homes, buildings and industrial jobsites. Widespread use puts individuals in the plumbing industry at risk of developing an asbestos-related illness. Plumbers continue to risk exposure when working in buildings constructed before 1980.

Asbestos was widely used throughout much of the 20th century in the railroad industry. It can be found in everything from flooring inside of train cars to brake pads, rail ties and steam engines. Railroad workers may also face exposure from naturally occurring asbestos while digging new rail lines.

Asbestos exposure is still responsible for thousands of deaths each year. Victims of asbestos exposure who have been diagnosed with mesothelioma may be eligible for financial compensation.
Learn More About Financial Assistance Available

Low-risk asbestos occupations include workers with:

Chimney sweeps are often exposed to lung irritants, including asbestos. The mineral was often used in building insulation and pipes, which may be exposed in chimneys. As a result, chimney sweeps may come into contact with asbestos while cleaning and servicing chimneys. These individuals have also reported a higher incidence of pleural diseases, including mesothelioma.

Engineers are employed in a variety of industries. They often don’t work directly with asbestos or asbestos-containing products. However, engineers may supervise and work closely with employees who do interact with the mineral. Oftentimes, engineers’ exposure is connected to working in the same area as employees who are handling asbestos materials. Because of this, engineers may be near dust created on the jobsite.

The farming industry has shown high rates of asbestos exposure. Asbestos affects dairy farmers, poultry farmers, agricultural equipment operators and many other farming trades. Exposure has occurred during operation and repairs of farming equipment with asbestos-containing components. Farmers also risk exposure from the deterioration and renovation of old farm buildings. Some farmers may work near naturally occurring asbestos, which could cause exposure when land is disturbed.

Hairdressers are at risk of coming into contact with asbestos fibers through prolonged and frequent use of older hair dryers. These hair dryers often contained the mineral as an insulator. Asbestos is no longer used in hair dryers today. But studies have shown older hair dryers produced before the late 1970s did release fibers into the surrounding air.

To protect the workforce, there are federal regulations in place to manage asbestos exposure on the job.

The Occupational Safety and Health Administration (OSHA) first regulated workplace asbestos exposure in the 1970s. Today, OSHA has strict guidelines on the acceptable amount of airborne asbestos fibers at a jobsite. OSHA guidelines also require labeling of all asbestos on jobsites and that workers receive proper personal protective equipment.

The occupations listed above are only a few of the many types of workers at risk of developing asbestos-related diseases. OSHA reports stress there is no safe level of occupational asbestos exposure. Those who believe they’ve experienced asbestos exposure at work should seek medical attention and file a complaint with OSHA.