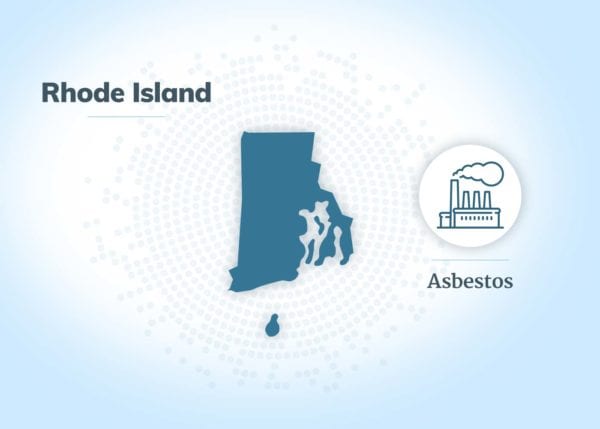 In addition to the one natural deposit of serpentine asbestos, residents of the state also faced potential exposure in the workplace.

Rhode Island has many schools at all grade levels that have been built with asbestos materials, putting faculty and staff as well as students in danger of exposure. With regulations under AHERA, schools must have asbestos management plans and have asbestos inspections regularly. Cumberland Elementary School, Smithfield High School and various buildings in the University of Rhode Island all have a known presence of asbestos.

Newport was a big maritime city, making it an ideal location as a naval port. The Newport Naval Base was an important center since 1900, but like other bases around the nation, utilized large amounts of asbestos. Through the 1970s, many ships were built with asbestos products and the toxin could be found in almost any part of the ship. Military bases also often relied on asbestos in their construction, which put veterans at a higher risk of exposure.

Rhode Island’s capital city Providence has long been an industrial hub with a variety of manufacturers creating all kinds of products, from textiles to silverware. Businesses like Halkyard Manufacturing Company, Acme Tile Co. and Biltmore Textile all used asbestos in either their facilities or equipment, potentially exposing their employees.

As a state on the coastline, Rhode Island began to see a few different shipyards pop up over the years. Herreshoff Boatyard in Bristol and Wickford Shipyard were just a couple sites that popped up for the construction and repair of various ships. This occupation, however, is considered among the most dangerous for asbestos exposure because the toxin was used so heavily throughout a ship’s construction.

Brewing companies with an established history often mean having older facilities that likely contain asbestos. Asbestos was common in so many building materials, and was also utilized in various types of machinery due to its heat resistance and durability. Several breweries in Cranston, like Narragansett Brewery and Management Brewery, and others throughout the state were known to contain some asbestos.

Questions About Mesothelioma and Asbestos Exposure in Rhode Island?

Rhode Island had one shipyard that put workers at risk of exposure, and was also later included on the EPA’s Superfund list because of asbestos and other environmental concerns.

The Newport Naval Yard is an over 1,000-acre site that was used by the U.S. Navy since 1900 as a refueling station. A portion of the site along the shore was used for disposal of various waste, known as McAllister Point Landfill. The landfill had all kinds of sludge waste from neighboring farms, as well as various metals and asbestos-containing materials. Over time, the waste began to contaminate the soil and water that would flow toward the bay. Other areas of the site for shipbuilding and repair would also be dangerous for workers, as asbestos was a common material used aboard ships. Investigations of various contaminations at this landfill and other buildings within the 1,000-acre site began in 1989 when it was added to the Superfund List, and various cleanup efforts occurred over this time. Both the EPA and the U.S. Navy led efforts to investigate and clean the site. Areas continue to be monitored and cleaned, and the site still operates as a naval base today.

Read more about large jobsites where asbestos exposure occurred in the major cities of Rhode Island. If you or a loved one worked at any of these sites in Rhode Island, you may be at risk to develop malignant mesothelioma. Click on any link below to view a complete list of work sites in that city where employees were exposed to asbestos.

Workplace asbestos exposure is also a concern if one looks beyond the major cities and towns in Rhode Island. Select a town below to see the list of its job sites known to have exposed workers to asbestos. Asbestos exposure at any one of the job sites revealed could have placed a worker at risk to develop mesothelioma cancer and other asbestos-related diseases.