Mesothelioma and Asbestos Exposure in Virginia 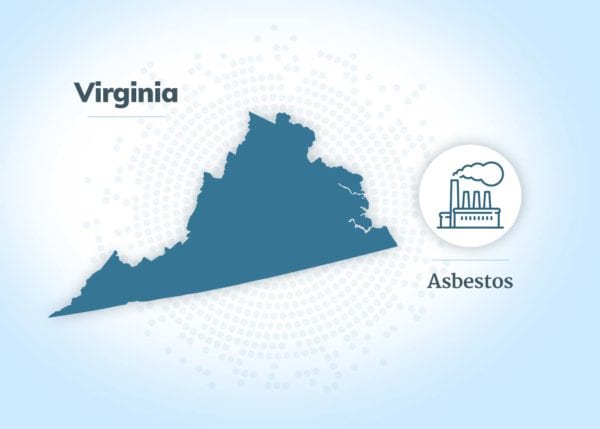 Asbestos Use in Virginia Work Environments

Asbestos has been used in various industries throughout the Commonwealth of Virginia.

Asbestos occurs in natural deposits throughout Virginia, and in the past, some of these deposits have been mined. In addition, asbestos may be present in other mines, such as coal or talc mines. Many of the miners and other workers at these mines and the processing centers where ore and metals were taken were exposed to both natural asbestos and asbestos-containing products used in the machinery that processed the raw materials.

Many have used asbestos in their manufacturing processes, due to the substance’s high resistance to chemical corrosion and heat. Employees who worked at these manufacturing plants would have been exposed to asbestos, significantly increasing their risk of developing mesothelioma. Some of the companies known to have had asbestos exposure problems in Virginia include Dow Chemical, DuPont, Olin Mathieson Chemical Corporation and Allied Chemical Corporation.

Asbestos has proven to be an excellent insulator against the electrical current, and as such has been used at a number of Virginia power generation facilities. One study showed that 13% of power plant employees had asbestos-related abnormalities on X-rays, and such workers are at an extremely high risk of developing mesothelioma. A few of the power plants with the worst records when it comes to asbestos include Potomac Electric Power Company in Alexandria, Virginia Electrical and Power Company in Richmond and Dan River Power and Manufacturing Company.

Virginia is home to a number of naval and commercial shipyards, with locations at Lyon, Newport News, Norfolk and Portsmouth, among others. Asbestos was used in the construction of military and commercial vessels until the early 1980s, and veteran shipbuilders continue to be one of the largest groups affected by mesothelioma today.

Questions About Mesothelioma and Asbestos Exposure in Virginia?

Veterans have a higher chance of developing mesothelioma, especially those who serve in the U.S. Navy, Coast Guard or Marines. Both the Sewells Point Naval Complex in Norfolk and the Naval Amphibious Base Little Creek in Virginia Beach have documented mesothelioma cases. Other military bases in the state could also have exposed veterans to asbestos.

Some military personnel faced exposure risks while stationed in other states, too. For Virginia veterans, this may include Camp Lejeune in neighboring North Carolina. For years, this base had asbestos and harmful chemicals that people may have been exposed to. For example, evidence shows there was chemical contamination in the drinking water between August 1, 1953, and December 31, 1987.

Exposure to this water contamination may have later led to health issues, including:

Virginia veterans and their families may have been at this base during these years. Recent legislation allows them to seek compensation for contaminated water exposure and various health conditions.

Virginia is home to a number of shipyards and Superfund sites where asbestos has been a major concern for workers, including those who have had to return to the sites to clean them up.

Built by George Lyon in the late 1920s, the Lyon Shipyard initially provided commercial shipbuilding and ship repair services to commercial boats. However, with the onset of World War II, the shipyard worked on some smaller ships for the U.S. Navy as part of the war effort, returning to its more familiar clientele of commercial ships after the war. During all of these periods, however, shipbuilders were exposed to asbestos, which was used heavily in both military and merchant ships during the early and middle decades of the 20th century.

The largest shipyard in the U.S. not owned by the Navy, the shipyard at Newport News, first opened its docks in 1886. Like many other older shipyards, it was heavily involved in the war efforts for both World Wars, and over the years it set a number of records, including the largest passenger vessel in America in 1933. Ownership has changed hands a number of times over the years, but what stayed the same during much of the time of its operation is the heavy amount of asbestos used in the ships built and repaired at the shipyard.

Situated on the Elizabeth River, the shipyard is older than the United States, having originated as a British-owned shipyard during colonial times. Home of the first drydock in the western hemisphere, the Norfolk Naval Shipyard has undergone many transformations and expansions over the centuries. During the 20th century, it built a great number of ships for both World War I and World War II, reaching a peak of at least 43,000 shipbuilders and other workers at the site. Massive amounts of asbestos were used in many of the ships built at the site up until about the 1970s, and veterans and civilian workers alike were exposed to the dangerous material during that time.

Read more about large jobsites where asbestos exposure occurred in the major cities of Virginia. If you or a loved one worked at any of these sites in Virginia, you may be at risk to develop malignant mesothelioma. Click on any link below to view a complete list of work sites in that city where employees were exposed to asbestos.

Workplace asbestos exposure is also a concern if one looks beyond the major cities and towns in Virginia. Select a town below to see the list of its job sites known to have exposed workers to asbestos. Asbestos exposure at any one of the job sites revealed could have placed a worker at risk to develop mesothelioma cancer and other asbestos-related diseases.