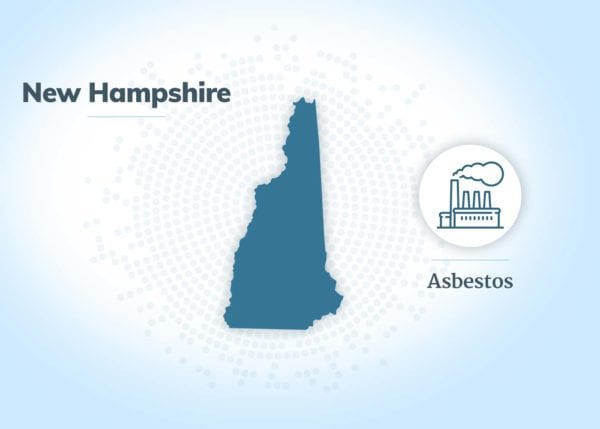 Even with the lack of natural asbestos, residents are at risk of exposure because of the mineral’s heavy use in over 50 job sites within the state.

Shipyard workers are considered among the most at risk for asbestos exposure because of the extent of the mineral’s use in shipbuilding. Ships of every variety likely contained asbestos in almost every part, from gaskets and insulation to the boiler room and living areas. Being in such close quarters with poor ventilation meant any damaged asbestos or repairs that required disturbing asbestos-containing products would likely result in more concentrated asbestos fibers in the air. Portsmouth Naval Shipyard exposed thousands of workers and veterans to asbestos throughout its long history.

Asbestos is still a problem in many schools throughout the nation, putting teachers, support staff and students in danger of exposure. While schools are required to have asbestos management plans in place to help eliminate such risks, there is always the chance that asbestos-containing materials could become unknowingly disturbed. St. Mary’s College in Greenfield, St. Paul’s School in Concord, and Plainfield Grammar School are just a few schools known to still contain asbestos.

Power plant equipment, like boilers and turbines, had been largely built with asbestos products in an effort to reduce the risk of fire or an explosion until the 1980s. Their structures also needed to be fire resistant in an attempt to protect both workers and the plant, so asbestos could be found widely throughout the facilities as well. Power plant workers face a high risk of exposure at plants like the Seabrook Nuclear Power Station.

Questions About Mesothelioma and Asbestos Exposure in New Hampshire?

New Hampshire is home to one shipyard that has operated for centuries, and more recently was added to the Environmental Protection Agency’s Superfund list because of various environmental hazards, including asbestos.

The Portsmouth Naval Shipyard is located on the southern boundary of Maine, really close to the city of Portsmouth in New Hampshire. It has been an important operation since way back in colonial times. The shipyard proved its worth throughout the many wars the nation faced, reaching its peak number of employees during World War I when workers began specializing in submarine work. After these contracts began to diminish, the shipyard shifted its attention to submarine repairs instead of building new ones. Though the employee based slowly diminished with less work, thousands of shipyard workers were exposed to asbestos. The shipyard was added to the Superfund List in 1994 after the EPA realized the extensive contamination of the Piscataqua River from various hazardous wastes like asbestos. Cleaning efforts and monitoring remain in place today.

Asbestos exposure is also a problem if you look beyond the major cities and towns in New Hampshire. Select a town to see the list of its job sites where asbestos exposure occurred. Asbestos exposure at any one of the work sites revealed could put a worker at risk to develop mesothelioma cancer.