Mesothelioma and Asbestos Exposure in Maine 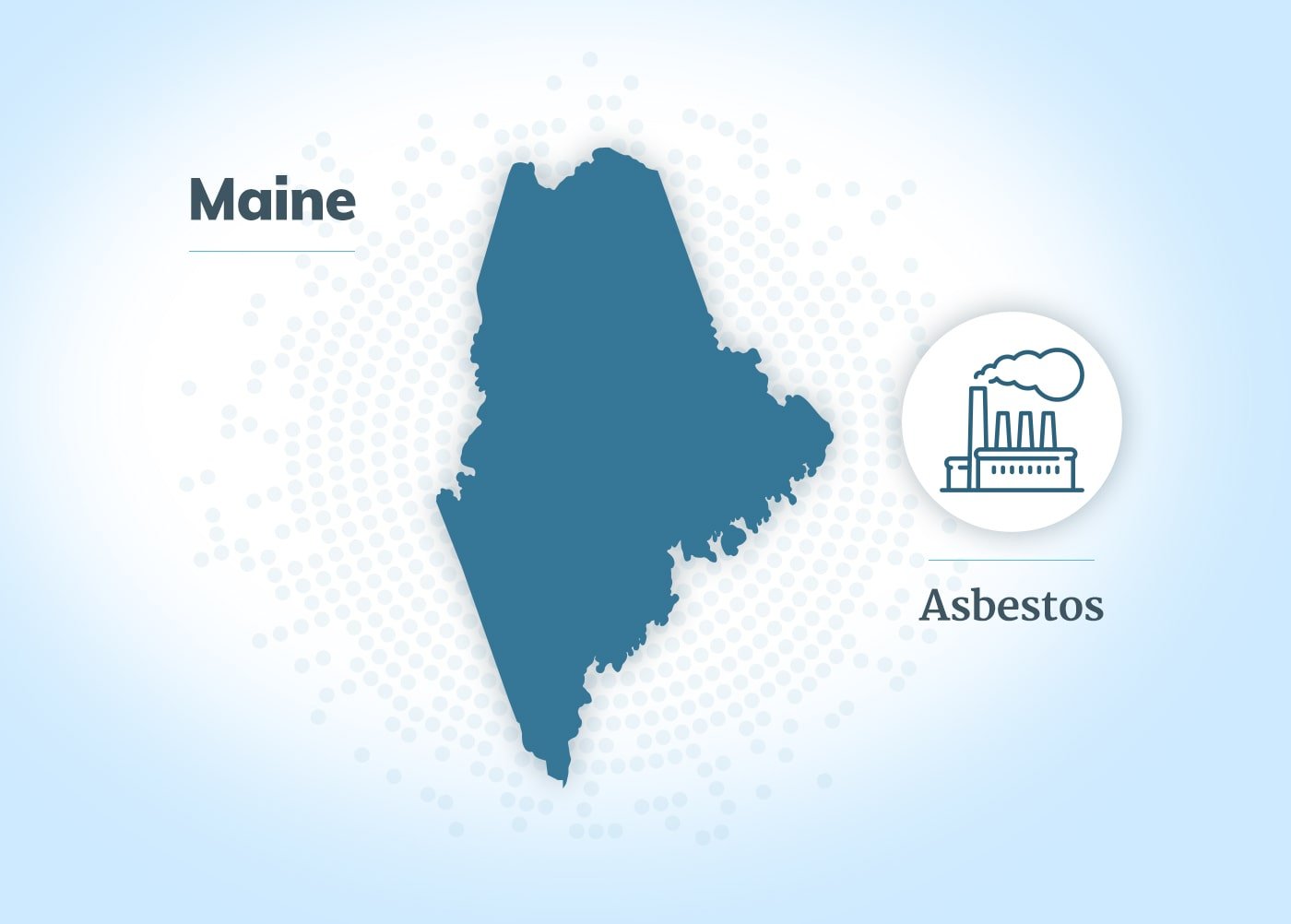 Mesothelioma and Asbestos Statistics in Maine

Maine has numerous natural asbestos deposits, as well as a large number of industries, that potentially exposed their workers to the toxin.

In addition to the natural asbestos deposits in the state, Maine is home to many industries that used asbestos in the workplace.

Shipyards are notorious hubs for asbestos, as the mineral was used in almost every aspect of a ship from the boiler to the insulation. This practice put both shipyard workers and Navy veterans at a high risk of exposure. Being a coastal state, Maine was home to several shipyards, including New England Shipbuilding Corporation in South Portland and the South Dry Dock and Repair Company also located in South Portland.

Power plants built before the 1980s all have asbestos issues. The equipment was largely created with various asbestos materials to protect the machinery from heat damage and help mitigate the risk of combustion. Maine Yankee Nuclear Power Plant is one of several power plants in Maine known to have contained asbestos.

Manufacturing paper remains an important industry in the United States, and supplies thousands of jobs throughout the country. Paper mills contain a lot of equipment and materials that contains asbestos, like drying machines and sandpaper backing. Oxford Paper Company in Portland and Georgia Pacific Paper Mill in Woodland are only a few of many paper mills in Maine that present the risk of asbestos.

Veterans make up about 30% of all mesothelioma diagnoses because of the heavy use of asbestos in every branch. Asbestos was used in buildings on base like in the Dow Air Force Base in Bangor, as well as throughout navy vessels and other equipment veterans used.

Metal workers face extreme heat on the job, and so relied heavily on asbestos materials on the job to protect themselves. Various asbestos clothing, like gloves and jackets, would often be adorned as they worked with metal sheets, or they’d often work with asbestos directly when it’d be used as a spray on the metal products for added durability. Workers at companies like the Sanford Sheet Plant risked asbestos exposure.

Questions About Mesothelioma and Asbestos Exposure in Maine?

In addition to the natural asbestos deposits, Maine also had two shipyards and two sites included on the Environmental Protection Agency’s Superfund List due to concerns of asbestos.

Bath Iron Works is a large shipyard in Bath, Maine that was first established in 1884. The shipyard quickly flourished, building its first ship called the Cottage City in 1890. The shipyard built a few more vessels before a fire demolished much of the site in 1894. The owner, Tom Hyde, gathered all his employees to help rebuild. Once the site was back up and running, they focused on building a wide variety of vessels, from yachts to ships for the U.S. Navy and Coast Guard. Regardless of the type of vessel, asbestos was a go-to material in their construction because of its durability and heat resistance. Any aspect of these ships could contain asbestos, from boiler rooms to insulation, putting countless shipyard workers at risk while constructing or repairing these vessels. Over the years, the shipyard had many ups and downs, but continues to produce a variety of vessels today with a workforce in the thousands.

The former naval station in Brunswick first opened in 1943 and was an important base throughout World War II and the Cold War. Throughout this time, the 3,100-acre base generated a variety of waste materials, from pesticides and metals to asbestos. These wastes contaminated the soil and groundwater around the area, as well. The site was included on the Superfund List in 1990 under special conditions to allow the base to continue functioning. Since its addition to the list, however, the U.S. Navy and EPA have been involved in many cleanup efforts over the years and invested millions of dollars toward investigating and cleaning the site. The station was later included on the Base Realignment and Closure list in 2005, which was a federal government initiative to increase the Department of Defense’s efficiency. The base officially closed in 2011, and the U.S. Navy continues to conduct cleanup at the site.

Portsmouth Naval Shipyard located in Kittery has been an important shipyard since colonial times, launching ships for the King and later building ships for the Revolution. Eventually, the shipyard began specializing in submarines and grew in importance throughout WWII. The shipyard spans several islands, connected by acres of fill, to keep up with the growing demand. Throughout its history, the shipyard had a lot of hazardous waste stored and disposed of on site, which had runoff into the Piscataqua River. It was added to the Superfund List in 1994 after the EPA realized the extent of contamination. Long-term cleaning efforts and investigations are still ongoing today. The shipyard still functions, largely for overhauling nuclear powered submarines.

Workplace asbestos exposure is also a concern if one looks beyond the major cities and towns in Maine. Select a town below to see the list of its job sites known to have exposed workers to asbestos. Asbestos exposure at any one of the job sites revealed could have placed a worker at risk to develop mesothelioma cancer and other asbestos-related diseases.