Mesothelioma and Asbestos Exposure in Vermont 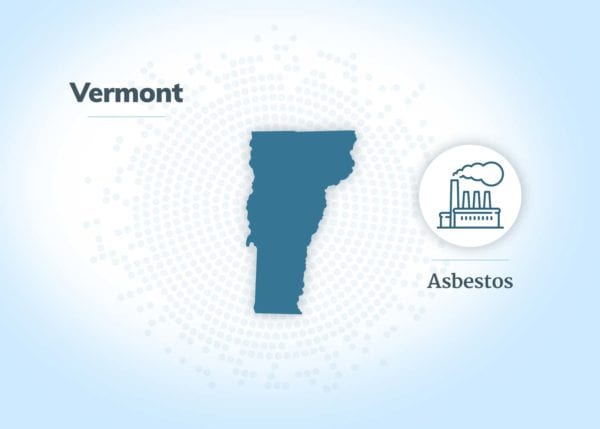 Asbestos and Mesothelioma Statistics in Vermont

Asbestos Use Across Vermont Industries

In addition to the abundance of natural asbestos, Vermont residents have faced exposure to asbestos at their workplaces, including an active asbestos mine.

Vermont was home to the first commercial asbestos mine in the United States. Asbestos was first discovered on Belvidere Mountain around 1823, and by 1899 a couple of mines on either side of the mountain had opened. The mines switched owners a few times, with companies like Ruberoid and New England Asbestos Mining and Milling leading the operations. In the 1970s, despite the dangers of asbestos becoming public knowledge, the Vermont Asbestos Group bought the mine and continued operations until its closure in 1993. Despite its closure, tons of asbestos waste and debris were left behind, leaving even more people at risk of exposure.

Boilers and generators, common facets of power plants, create high heat and can risk combustion or causing fires. As such, asbestos was a common material used in their creation in the effort to protect the machinery and the workers from these events. Asbestos was also used in the construction of the facilities themselves and sometimes in protective clothing, too. Power plants, including the Vermont Electric Power Company Inc. and Montpelier and Barre Light and Power Company, put countless workers at risk of exposure.

The University of Vermont in Burlington is one of hundreds of schools throughout the country that were constructed during asbestos’ heyday. For many older schools, asbestos can be found almost anywhere because it was used widely in so many construction materials, like insulation. While there are laws in place to help protect those who work and attend these schools, exposure to the toxin still happens regularly.

The paper industry has also utilized asbestos-containing materials within their processes. Equipment like drying machines and sandpaper backing would often contain the mineral. Like many other older buildings, older mills also likely have asbestos somewhere within their walls. Some of these companies include Green Mountain Paper and White Mountain Paper Company in Bellows Falls.

Questions About Mesothelioma and Asbestos Exposure in Vermont?

Though no contaminated sites in Vermont were ever officially added to the Environmental Protection Agency’s Superfund list because of asbestos concerns, many in the state lobbied for the former asbestos mine to be included. Though the EPA never included the site in their docket for cleanup, residents in Vermont took action against the mine owners to have the site appropriately cleaned.

The Belvidere Mountain Mine first opened back in the 1800s, and operated until the Vermont Asbestos Group officially closed it down in 1993. When finally vacating the mine, the site wasn’t properly cleaned and tons of asbestos waste was left behind. In one record, the EPA noted one pile of mill tailings towering at nearly 400 feet high. The EPA did lead investigations of the site and evaluated the contamination several times over the years, as did various agencies in Vermont. In the early 2000s, the EPA said the former mine could potentially be added to the Superfund list, but negotiations remained at a standstill. The EPA, state, and G-I Holdings (another former owner of the mine) had already paid millions of dollars to stop erosion at the site to try to halt more contamination, but the mine still required millions more to be thoroughly cleaned. In 2008, Vermont decided to take action and their attorney general filed a lawsuit against the Vermont Asbestos Group. After 5 years of back-and-forth, a settlement was reached in 2013 for the mine owner to assist in cleanup costs. Vermont Asbestos Group will pay over $30 million for the site to be cleaned properly, and will also be responsible for paying around $5,000 to the state each year for the next decade to help make up for the previous costs the state paid out.

Asbestos exposure is also a problem if you look beyond the major cities and towns in Vermont. Select a town to see the list of its job sites where asbestos exposure occurred. Asbestos exposure at any one of the work sites revealed could put a worker at risk to develop mesothelioma cancer.