Asbestos Exposure and Mesothelioma in Nebraska 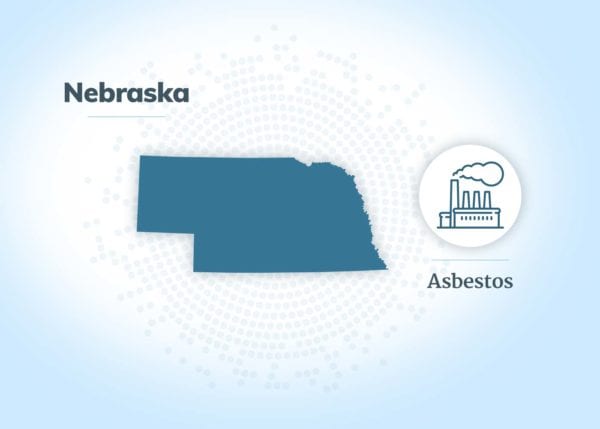 Asbestos and Mesothelioma Statistics in Nebraska

Asbestos Use Across Nebraska Industries

Despite the lack of natural asbestos, Nebraskan workers have still suffered from asbestos-related diseases like mesothelioma because of its heavy use in several industries.

Across the country, power plants heavily used asbestos in their machinery and facilities because of its heat resistance. Since processes in power plants have the chance to produce fire or even internally combust, asbestos seemed like a good solution to help avoid these problems. Plants like the Hallam Nuclear Power Facility were known to use asbestos. A 2007 study examining 1,100 power plant workers found 13% to have evidence of asbestos diseases.

Regardless of the products being made, countless manufacturers used asbestos and other hazardous materials in building their facilities and equipment. Goodyear Tire and Rubber Company and Weaver Potato Chips, both based in Lincoln, produce vastly different goods but both have documented instances of asbestos exposure.

Questions About Mesothelioma and Asbestos Exposure in Nebraska?

Fortunately, Nebraska does not have any prior or current sites included on the Environmental Protection Agency’s Superfund list for asbestos contamination. But even though sites weren’t included on the list specifically, there have been 28 sites investigated by the EPA and the Agency for Toxic Substances and Disease Registry (ATSDR) because of asbestos concerns.

In Omaha, the Western Minerals Products was one prominent site selected for evaluation by the ATSDR’s National Asbestos Exposure Review in 2004. The process entails investigations of over 200 sites around the country that have been affected by vermiculite ore that was mined from Libby, Montana. The Western Minerals Products worksite was an exfoliation facility and began processing Libby vermiculite in the 1940s. In 1967, W.R. Grace and Company purchased the facility and operated there until 1989. Throughout that time, the facility was one of the highest volume processors for the company. In 2000, the EPA took samples of the surrounding soil and found trace levels of asbestos. Further investigation also found signs of asbestos on the rail spurs around the site and in some adjacent buildings. ATSDR, however, doesn’t see a large risk for employees at the site past the 1989 sale from W.R. Grace, since the site was cleaned and tested for asbestos fibers before transfer of ownership.

Provided below is a list of cities in the state of Nebraska where asbestos use in the workplace is known to have occurred. Click on a city below to see more detailed information about the specific job sites where asbestos exposure occurred.

Beyond the major cities and towns in Nebraska, asbestos exposure has also occurred at a number of other job sites. Select a town to see the list of its work sites where asbestos exposure occurred. Asbestos exposure at any one of the sites revealed could put a worker at risk to develop pleural mesothelioma.