Mesothelioma and Asbestos Exposure in Massachusetts 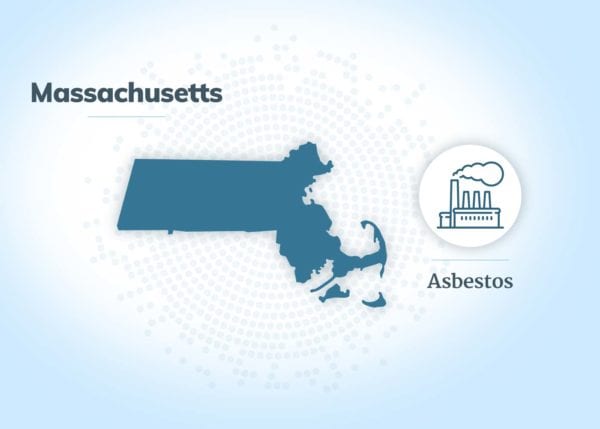 Mesothelioma and Asbestos Statistics in Massachusetts

Industries in Massachusetts contribute to the high mesothelioma death rate, as many heavily relied on asbestos.

Two active asbestos mines were located near Pittsfield and near the Harvard Forest in the region near the Quabbin Reservoir. Though the last active mine in the U.S. shut down in 2002, commercial mining operations like this can have long-term health effects on the workers. One of the mines was operated by W.R. Grace & Company, which produced a wide variety of asbestos products and was found to be a horrible polluter by the EPA.

Heat and chemical resistance led to the use of asbestos in so many facilities and products for manufacturing. Wainright Manufacturing Company and American Can Company are just a few sites in the state that used asbestos products.

Asbestos in schools is a big problem across the country, and has affected many buildings throughout Massachusetts. Middleboro Junior High and High schools, Medford Middle School, Needham High School and Dartmouth Catholic High School are just a small sample of schools where students and teachers face the risk of asbestos exposure.

Shipyard workers faced a high risk of asbestos exposure because asbestos materials were used heavily in shipbuilding, in everything from the insulation to the boiler room to sleeping areas. Massachusetts was home to several shipyards, including Bethlehem Hingham Shipyard and Fore River Shipyard.

Asbestos was used actively in the military, especially in the building of naval vessels. U.S. Naval Drydock in Charlestown and Bedford Air Force Base are two military sites known to have asbestos, but there are many more bases and naval shipyards across the country that also threaten exposure.

Questions About Mesothelioma and Asbestos Exposure in Massachusetts?

Massachusetts has had several dozen sites added to the Environmental Protection Agency’s Superfund list, including a few sites with asbestos contamination. Additionally, five functioning shipyards in the state also posed the risk of asbestos exposure.

This operating shipyard began back in 1884 as the Fore River Engine Company run by Alexander Graham Bell’s assistant, Thomas Augustus Watson. Over time, this shipyard became one of the fastest in the world and produced well over 600 vessels. Until its closure in 1986, the shipyard changed names and ownership numerous times, and played an essential role in both world wars and the Cold War. During this period, the shipyard produced many important ships, including the U.S. Navy’s Maritime Prepositioning Ships which were over 42,000 tons and needed to be equipped with supplies for 3,000 men for 30 days. Today, the shipyard is the site for the United States Naval and Shipbuilding Museum, including the cruiser Salem (CA139) that had been built there in 1949.

The Charlestown Navy Yard in Boston was first established in the 1800s, and became an important center for naval vessels for almost two centuries. The shipyard employed civilians and various specialized workers, like carpenters and blacksmiths, as well as the main work force of Navy veterans. The shipyard continued to grow tremendously, putting thousands of workers in varying trades at risk of asbestos exposure. Though it began primarily as a repair facility, by the 1930s the shipyard shifted its focus to mainly shipbuilding. Thousands of employees worked around the clock to create warships, eventually becoming known as a “destroyer yard.” After wartimes, however, production decreased dramatically and the shipyard closed in 1973.

The speed of shipbuilding at the Bethlehem Hingham Shipyard was truly impressive in the industry. At their height of production during World War II, the shipyard was able to produce a new ship about every 10 months. The massive yard encompassed 150 acres and employed over 30,000 workers during its peak, which put many lives at risk of asbestos exposure. Despite growing immensely from its opening in 1913 and being such an important producer during wartimes, the shipyard ultimately closed in 1986.

The 46-acre site for Nuclear Metals, Inc. in Concord was added to the Superfund List in 2000. The company made depleted uranium products for armor-piercing ammunition, as well as worked with metal powders for medical applications and specialty products. Unfortunately, over time waste from the facility discharged into the surrounding soil and groundwater. The EPA found solid asbestos waste, as well as uranium and assorted metals. Cleanups to protect human and environmental health occurred immediately, though a long-term plan for cleaning and maintenance is ongoing.

Danvers-based Creese & Cook Tannery was a leather tanning operation. The site had also been used for waste disposal and the treatment of hazardous substances from as early as 1903 until the 1980s. The company continued operations until filing for bankruptcy in 1982, but the waste and hazards remained. The site was added to the Superfund List in 2013, after site evaluations revealed sludge waste, contaminated soil and groundwater and various hazardous materials disposed of improperly, including asbestos materials. Cleaning and maintenance efforts continue today.

Provided below is a list of cities in the state of Massachusetts where asbestos use in the workplace is known to have occurred. Click on a city below to see more detailed information about the specific job sites where asbestos exposure occurred.

Workplace asbestos exposure is also a concern if one looks beyond the major cities and towns in Massachusetts. Select a town below to see the list of its job sites known to have exposed workers to asbestos. Asbestos exposure at any one of the job sites revealed could have placed a worker at risk to develop mesothelioma cancer and other asbestos-related diseases.