Mesothelioma and Asbestos Exposure in Michigan 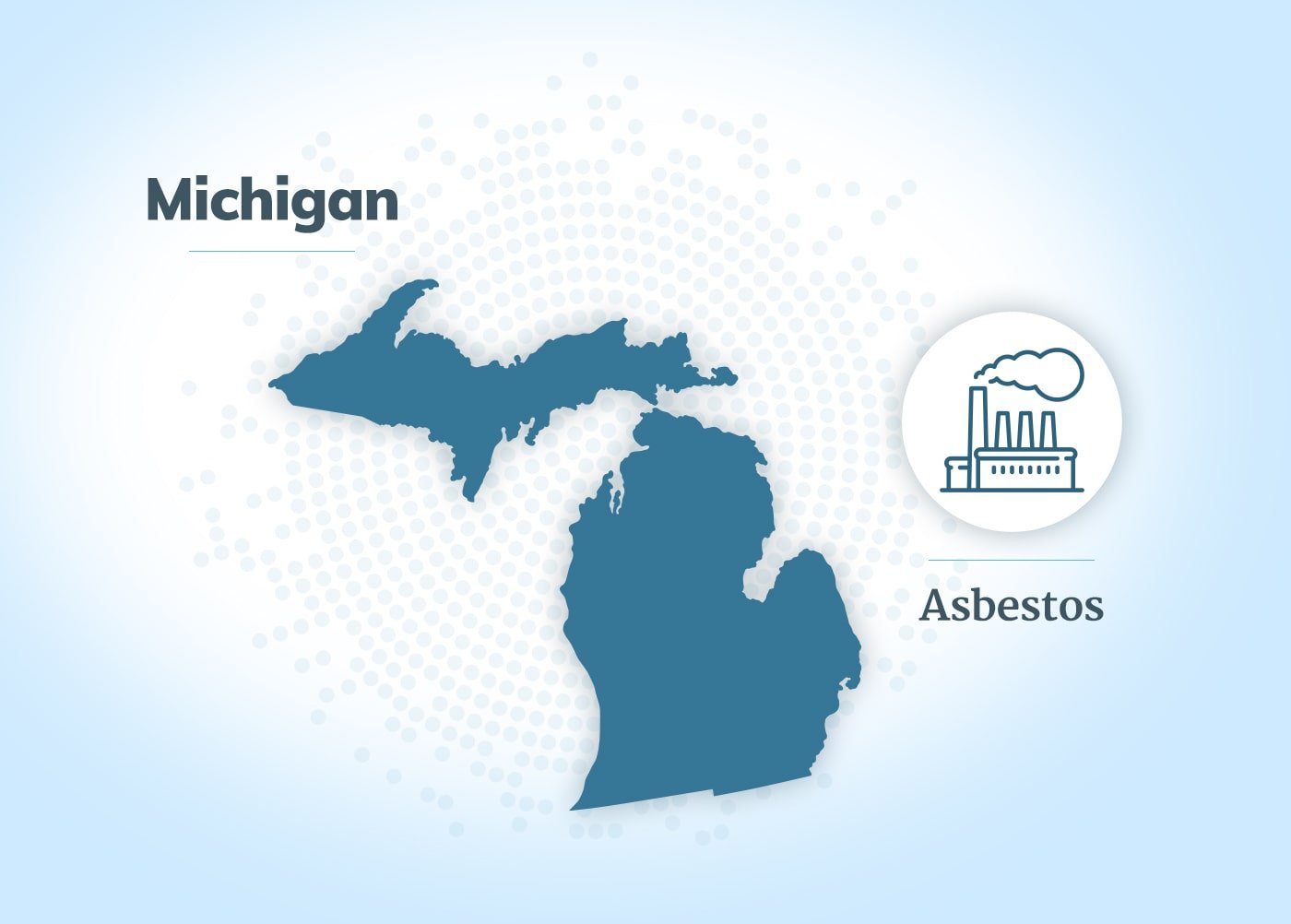 Michigan is part of the Rust Belt area of the United States, which tends to have a higher amount of asbestos exposure and a greater incidence of mesothelioma than other states.

Asbestos Use Across Michigan Industries

Michigan is perhaps best known for its status as a motor vehicle manufacturing center, which historically has used a lot of asbestos in products like brake pads, clutches, and gaskets. Lake Michigan also has some shipyards where asbestos has been used heavily in the past.

Detroit has been the epicenter of the U.S. automotive industry for well over a century since Henry Ford started the Ford Motor Company in that city. Automobile plants are asbestos-heavy industries and represent the majority of asbestos exposure sites in Michigan. In addition to Ford, other Michigan car manufacturers that exposed their employees to the deadly material include General Motors, Chrysler, Plymouth, the Continental Motor Company, and the Hudson Motor Car Corporation.

Michigan has a significant number of steel mills, foundries, and metalworking shops to support the car-making industry. Given the high heat involved in melting, molding, and tempering steel, asbestos was often used in protective gear and in the machines and products used to manipulate the metal. Some of the jobsites where steelworkers became exposed to asbestos include the Great Lakes Steel Mill, the Detroit Grey Iron Foundry, the Michigan Steel Foundry, and National Steel.

In addition to being divided in two by Lake Michigan, the State of Michigan is bordered by three other Great Lakes, making it the state with the largest inland coastline in the country (according to the NOAA). This access to deep inland waters provides plenty of space for shipbuilding activities within the state and its immediate neighbors. Defoe Shipyard and Eldean Shipyard are two sites where shipbuilders may have been exposed to asbestos.

Like so many other states, Michigan has had problems with asbestos exposure in its power generating facilities. Companies like Detroit Edison, Northern Michigan Electric Cooperative, and Central Michigan Light and Power Company have all exposed their workers to the deadly substance, and the state’s several nuclear plants – including Cook Nuclear Power Plant, Bridgeman Nuclear Plant, and Big Rock Point Nuclear Power Plant – have all used asbestos heavily in their operations.

Although the state does not have a huge oil industry, in order to keep up with its industrial needs, Michigan does have a number oil refineries and distribution hubs that used asbestos to prevent or contain fires due to the highly volatile nature of the fuel. Some known oil companies that have exposed their workers in Michigan include the Citrin Oil Company, Consolidated Oil, Marathon Oil, and the synthetic liquid gas plant in Marysville, among others.

Questions About Mesothelioma and Asbestos Exposure in Michigan?

According to measurements used by the National Oceanic and Atmospheric Administration, Michigan has the most coastline of any inland state due to its location bordering four of the five Great Lakes. As a result, shipping and shipbuilding are major industrial concerns in Michigan, with plenty of harbors, dry docks, and shipyards both in the state and just over the border in neighboring states.

The Defoe Shipbuilding Company was founded in Bay City, MI, in 1905 as a humble manufacturer of wooden fishing boats. As the company grew, it soon changed its name to Defoe Boat and Motor Works, and it began creating boats with gasoline engines, including two cruisers that the company sold to the U.S. Navy for use during World War I. By the time World War II came about, Defoe was much larger and built more than 150 naval ships to participate in the naval war. In the post-war years, the company continued to build ships for the Navy, as well as commercial bulk freighters that operated on the Great Lakes shipping routes. During this entire period, the company used asbestos as part of its manufacturing process, as was standard for nearly all shipbuilders in those days. In 1976, the company was forced to close after its contracts with the Navy began to run out – although the Defoe Shipyard’s “legacy” continued to live on in the lungs of those who worked there and later developed mesothelioma.

Gus, Otto and Joe Jesiek started their shipbuilding business in 1901 on the Grand River in Grand Rapids, MI. While Joe and Otto left a few years later to start a marina on Lake Macatawa (then known as Black Lake), Gus continued the shipyard business throughout the early 1900s, building boats anywhere from 24 – 75 feet in length. In the lead-up to World War II, the company built submarine chasers that helped patrol the Atlantic coast of the U.S., as well as some tug boats for use at naval shipyards. After the war, the company continued to produce many types of commercial and recreational boats, including ferries, yachts, and other ships, and the Jesiek Brothers Shipyard soon became the largest shipyard on Lake Michigan for servicing and docking, and eventually the company was sold and became Eldean Shipyard. Throughout its heyday, however, Jesiek Brothers Shipyard used tons of asbestos in its boats, exposing shipbuilders and craftsmen to the deadly dangers of this carcinogen.

Learn more about asbestos exposure in the major towns and cities of Michigan by clicking on the links below. If you worked at any of the jobsites highlighted on these pages, there is a possibility that you may have been exposed to asbestos which is known to cause the terminal cancer mesothelioma.

Beyond the major cities and towns in Michigan, asbestos exposure has also occurred at a number of other job sites. Select a town to see the list of its work sites where asbestos exposure occurred. Asbestos exposure at any one of the sites revealed could put a worker at risk to develop pleural mesothelioma.