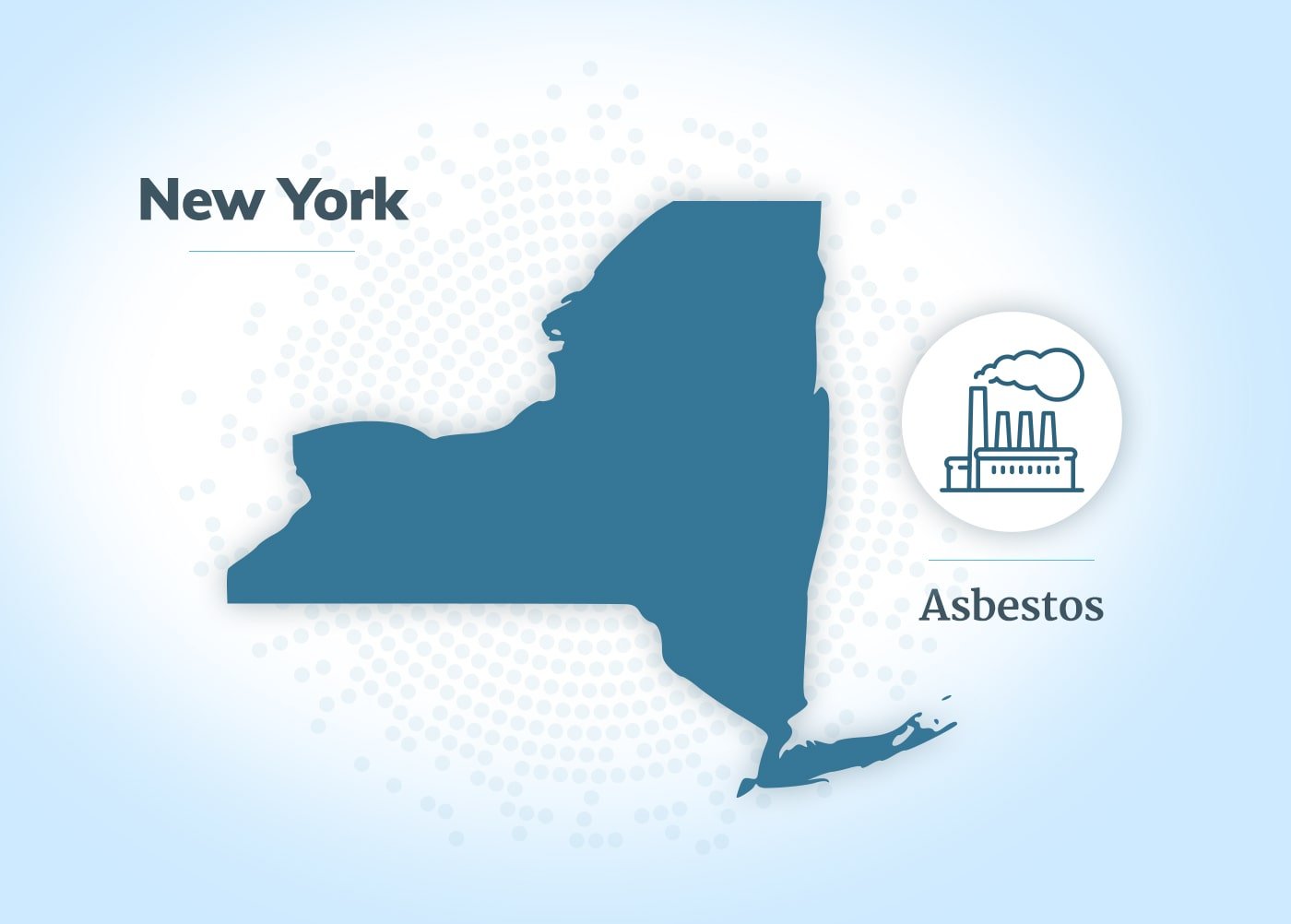 Between New York City and the various regions of Upstate New York, there are many places where the state’s residents, workers, and vacationers may have been exposed to asbestos.

New York is a diverse state, with a lot of different industries that have exposed workers, residents, and visitors to asbestos over the years.

The asbestos industry itself was born in New York City when Henry Ward Johns, founder of what later became known as the Johns-Manville Corporation, started to market asbestos-containing materials for use in construction projects as early as the 1850s. Many of the historic buildings on Manhattan and elsewhere throughout the state and nearby states have had to undergo extensive asbestos abatement efforts due to the efforts of Johns and his successors, which has led to the exposure of millions – possibly billions – of people over the years.

In areas of Upstate New York near the border of Vermont, some of the highest rates of mesothelioma have occurred due to the mining of talc and other minerals. In addition to the naturally occurring deposits within the state, asbestos can also be found intermingled with other mineral deposits like talc, increasing the risk of exposure for miners and others who work with the extracted materials.

As the most populous metropolitan area in the United States, New York City is partly known for the ever-changing nature of its skyline. Over the years, some of the largest construction projects in the world have occurred in New York – not to mention some of the worst tragedies, like that which occurred on September 11th, 2001. The amount of asbestos released into the air by the collapse of the Twin Towers has led to an unusually high rate of respiratory disorders – including asbestosis and mesothelioma – in Brooklyn and nearby neighborhoods. These and other problems are directly related to the high use of asbestos in construction by companies like W. R. Grace, Asbestos Construction Company, and Lord Construction Company.

Although New York City is many things, at heart it is a port city, with a number of shipyards and docks for construction and repair of ships used for import, export, and leisure activities. Important military installations like the Brooklyn Naval Shipyard can also be found in New York City. Elsewhere in the state, shipyards can also be found on the shores of Lake Erie and Ontario Lake, the two Great Lakes that border the state.

In addition to being home to the second-largest hydroelectric power generating facility in the country at Niagara Falls, New York houses a large number of power plants that send large amounts of electricity to New York City and other municipalities throughout the state. A few of these power stations that have been known for asbestos exposure include the Arthur Kill Generating Station and Astoria Gas Generating Station on Staten Island, Ravenswood Generating Station in Queens, and Niagara Mohawk Power Corporation in Syracuse.

Questions About Mesothelioma and Asbestos Exposure in New York?

New York has only about 127 miles of coastline on the Atlantic Ocean – less than its neighbor New Jersey, and mostly due to the lengthy shores of Long Island. However, with two Great Lakes on its northern and western borders, New York still has plenty of room for shipyards where workers could be exposed to asbestos.

In 1939, Bethlehem Steel expanded its already vast empire by buying United Shipyards on Staten Island and renaming it to Bethlehem Steel Shipyard. Through the end of World War II in 1945, the shipyard produced 50 destroy-style naval ships and 75 landing crafts, while also providing maintenance and repair services for countless other military vessels. While the shipyard maintained its output (at lower rates) in the period immediately after the war, by 1960 there was too little work to be had, and Bethlehem Steel shutdown the shipyard. Nonetheless, for more than 20 years, shipbuilders were exposed to the large amounts of asbestos used in ship construction, making them more likely to develop mesothelioma in their later years.

Established in the early days of the United States, the first naval contract for the Brooklyn Shipyard came in 1798. It has since been involved in a number of historical events, such as the development of the first U.S. steam-powered warship, The Fulton, and the launch of the Niagara, which laid down the first transatlantic cable. While demand declined early in 20th century, during World War II the Brooklyn Naval Shipyard lived up to its name and became the primary producer of battleships for the U.S Navy. After the war, the shipyard continued building ships for Cold War-era naval strategies, but in 1966 a devastating fire caused the shipyard to eventually close. During the height of the Brooklyn Shipyard’s most active period, thousands of workers were undoubtedly exposed to asbestos, a popular material used in boat construction at the time due to its fire-resistant properties.

Opened in 1903, Caddell Drydock and Repair Company is the oldest still-active shipyard in New York State, with dry docks and other facilities that accommodate more than 300 vessels per year. Unlike some of the other shipyards in New York, Caddell Dry Dock has focused primarily on commercial shipping concerns throughout the course of its operations, although it did supply several boats to the U.S. Navy during World War II. In addition to standard repair work, the company has become famous for its restoration and replica work on historic ships. Sadly, it is also notable for exposing its workers to deadly asbestos during much of its operating period in the 1900s.

The Brooklyn Division of Todd Shipyards is the company’s original site, founded by William H. Todd himself. Originally known as Robins Dry Dock & Repair Company, the site has shifted and grown with a varying number of shipyards over the years. In the 1940s, the Brooklyn Division received a coveted “M” award from the Maritime Commission in recognition of its excellence in construction and repair operations. During the war years, the number of employees who worked there reached nearly 20,000, which led to the construction of 3,000 ships to boost the war effort. After World War II, the Todd Corporation turned its Brooklyn Division to focus on other projects in addition to shipbuilding and repair, but that did not prevent its workers from the asbestos exposure that could eventually lead to the development of deadly cancers.

Provided below is a list of cities in the state of New York where asbestos use in the workplace is known to have occurred. Click on a city below to see more detailed information about the specific job sites where asbestos exposure occurred.

Asbestos exposure is also a problem if you look beyond the major cities and towns in New York. Select a town to see the list of its job sites where asbestos exposure occurred. Asbestos exposure at any one of the work sites revealed could put a worker at risk to develop mesothelioma cancer.