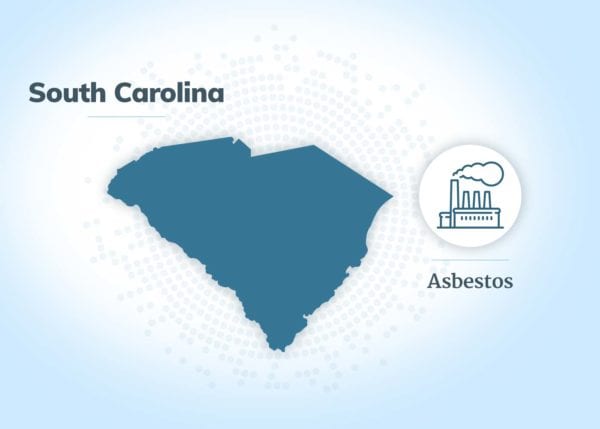 Asbestos Use Across South Carolina Industries

The major industrial sources of asbestos exposure in South Carolina include shipbuilding and power generation – both of which cause some of the highest rates of asbestos-related disease.

Beginning in the mid-1930s, asbestos insulation was used extensively in the construction of oceangoing vessels. South Carolina was home to a number of shipyards and drydocks that used asbestos extensively, exposing workers and visitors to the carcinogenic substance. Some of the shipyards known to have asbestos exposure problems include Braswell Services Group, Carolina Shipping Company, Charleston Shipbuilding and Drydock Company and Detyen’s Shipyards.

Power plants frequently used asbestos in a variety of parts, such as gaskets, valve seals, pumps, pipe fittings and machinery insulation. South Carolina has quite a few power plants where employees were exposed to asbestos as part of their ongoing work, including sites like the Duke Power Company’s Oconee Nuclear Plant in Seneca, South Carolina Electric & Gas Company in Columbia and the Charleston Consolidated Railway, Gas & Electric Company.

South Carolina has been home to a number of military bases over the years, where veterans of all branches of the U.S. Armed Forces were exposed to asbestos used in many different applications, from insulation in naval ships to brake pads in land vehicles. Some of the bases known to have caused problems for both military personnel and civilians who lived or worked there include Parris Island Marine Base, Charleston Air Force Base and the Naval Weapons Station at Goose Creek.

Military personnel may have faced exposure risks while stationed in other states, too. For South Carolina veterans, this may include Camp Lejeune in neighboring North Carolina. For years, there were exposure risks to asbestos and harmful chemicals at this base. Evidence shows hazardous chemical contamination in the water between August 1, 1953, and December 31, 1987.

Exposure to this contaminated water may have later led to health issues, including:

South Carolina veterans and their families may have been at this base during these years. Recent legislation allows them to seek compensation for contaminated water exposure and related health conditions.

South Carolina is home to a number of paper mills and plants where asbestos was used heavily in the development of paper products. Some of these companies include the International Paper Company in Greenville, Southern Kraft Paper Company in Georgetown, Reigel Paper in College Spur, Bowater Paper in Rock Hill and Carotell Paper Board Corporation in Taylors.

Questions About Mesothelioma and Asbestos Exposure in South Carolina?

South Carolina’s Atlantic coastline offers a distinct advantage over many other states with respect to locations for shipyards.

Located in Charleston, South Carolina, the Braswell Shipyard provided many marine services related to building and repairing ships of all sizes throughout most of the 20th century, for both commercial and naval use. During this period, the company employed thousands of workers to construct the vessels, and given the large quantities of asbestos used in ships up until about the late 1970s, many of those workers were put at significant risk of developing mesothelioma, a deadly cancer caused by inhalation of asbestos fibers.

More involved in commercial shipping than shipbuilding services, the Carolina Shipping Company provided both docking and transport services while also maintaining its own small fleet of cargo ships. Although the exposure to asbestos might have been less than that of shipbuilders who worked with the material directly, dock workers like those at the Carolina Shipping Company would likely have encountered airborne asbestos in any damaged ships where insulation or other materials could have exposed to the open air.

Located about five miles north of Charleston, South Carolina, the Charleston Naval Shipyard provided support and repair facilities for a wide variety of ships, from submarines to destroyers. During World War I, the shipyard employed thousands of people to help construct ships for the worldwide conflict, and by the time World War II came around, the shipyard was expanded again, with a peak of nearly 26,000 shipbuilders, stevedores, administrative personnel and other workers all involved in the operation. All of these individuals were put at a high risk of developing mesothelioma due to the nearly daily contact with asbestos used in ships of the time period.

Founded in 1962 by William Detyen, Detyen’s Shipyards, Inc. is situated on the Wando River in Mt. Pleasant, South Caroline. Associated with the Charleston Navy Yard, Detyen’s helped to build and mend hundreds of ships throughout the two World Wars as well as later conflicts in Korea and Vietnam. During that period, the shipyard exposed many shipbuilders and other workers to the tons of asbestos that were added to boats to prevent and contain fires while on the ocean. Detyen’s is still in operation today, with several hundred employees consistently working on boats from navies around the world.

Asbestos exposure is also a problem if you look beyond the major cities and towns in South Carolina. Select a town to see the list of its job sites where asbestos exposure occurred. Asbestos exposure at any one of the work sites revealed could put a worker at risk to develop mesothelioma cancer.