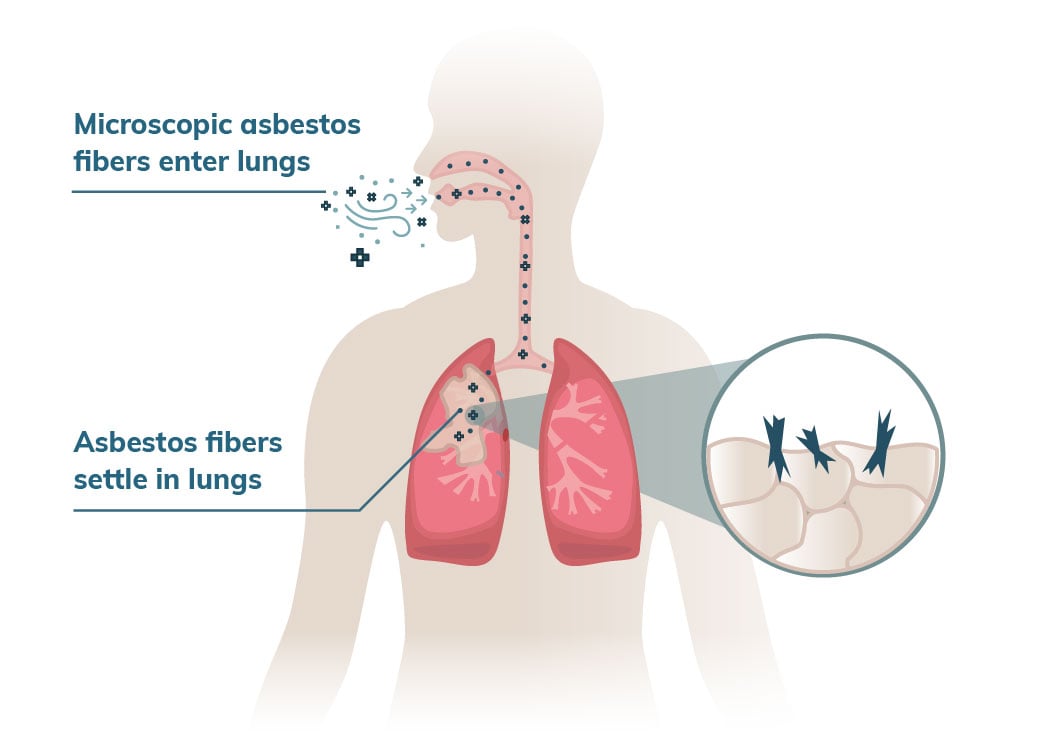 Asbestos refers to six naturally occurring fibrous minerals that are heat- and fire-resistant. Once deemed a miracle material, asbestos has been used in various applications for many years, especially in construction. Asbestos was often used in insulation and other building materials for homes, schools and commercial buildings. The mineral was also used throughout a variety of other industries, like shipbuilding, oil refineries, various industrial plants and in the automotive industry.

When the asbestos materials become damaged, however, fibers can be easily inhaled and eventually develop into serious health problems such as mesothelioma, lung cancer and asbestosis. Despite asbestos being recognized as a carcinogen by at least the 1940s, the mineral was widely used throughout many industries through the 1970s. Today, the toxin is still allowed in certain products and industries in small amounts, leaving the public at risk of dangerous exposure.

Asbestos exposure can happen to anyone, and it can often go unknown for many years, as symptoms of asbestos diseases can take decades to first present. Exposure is most common in the workplace. Depending on the field in which workers are employed, their risk of being exposed to asbestos could be higher than other occupations. Although asbestos is most commonly found on specific jobsites, individuals may also be exposed from household products or from damaged asbestos in homes and other buildings. According to the Environmental Protection Agency (EPA), there is no safe level of asbestos exposure.

Many workers and maintenance contractors at industrial and commercial jobsites are subjected to dangerous levels of asbestos while on the job. Due to the high-heat environments of sites such as steel mills, breweries, power plants and oil refineries, workers are often exposed to asbestos-containing materials, even in industries that no longer actively rely on the mineral. Some workers even wore heat-resistant protective equipment made with the mineral, leaving them at an increased risk.

Hundreds of companies across these and other industries used asbestos for decades, despite knowing the dangers. Historical records show many employers were aware of the dangers of exposure but continued to utilize asbestos for processes and products because it was inexpensive. Because of this neglect, estimates show at least 27 million workers in various occupations were exposed to harmful asbestos between 1940 and 1979. Research has shown worldwide at least 125 million workers continue to be exposed to asbestos on the job each year. Occupational asbestos exposure is one of the most common causes of mesothelioma, accounting for 70% of all mesothelioma deaths.

Asbestos was used across all branches of the military, most commonly in the construction of military ships, in vehicles and aircraft and even throughout military bases. Estimates show at least 4.2 million civilians and veterans worked in shipyards during World War II alone. Due to the abundant use of asbestos and confined spaces of many military vessels, asbestos exposure was almost unavoidable for millions of military personnel. Because of this, one out of every three mesothelioma diagnoses is a veteran who was exposed to asbestos during their time of service.

Many companies put consumers at risk by manufacturing and distributing asbestos products in the 1900s. While some materials, like insulation and siding, were largely only in direct use by certain industries, consumer goods like hair dryers and crock pots also frequently contained asbestos. Though today there are regulations in place to discontinue the use of asbestos in many of these goods, certain products like insulation can still contain up to 1% of asbestos.

Talc is a natural mineral that is generally deemed safe, but it can pose dangers when it becomes contaminated by asbestos. Since talc and asbestos deposits occur naturally in similar areas, talc can easily become contaminated with asbestos fibers when mining, which can eventually make its way into talcum powder products. Products, such as cosmetics and baby powder, are now tested for asbestos, but workers and consumers may have been exposed for years, whether through mining or applying topical asbestos-containing products to the body. Although many instances of cancer from talcum powder have involved consumers developing ovarian cancer, mesothelioma and lung cancer cases are also emerging.

Occupational exposure does not only impact workers, but the exposure also has the potential to extend to their family members and others. Secondary exposure accounts for about 20% of mesothelioma cases and occurs when individuals who work in asbestos-contaminated environments bring home asbestos fibers on their clothes, skin or hair. Fibers can cling onto fabrics and skin, making them transferable to those who may not have been exposed otherwise. Women are often the victims of asbestos-related disease as a result of secondary exposure, as in the past, they have typically been less likely to be on the jobsites.

Find the right fit for your situation
Get Connected

03. Exposure in the United States

Asbestos Exposure in the United States

Asbestos use was widespread across the country. Certain states, like California, have high quantities of natural asbestos deposits. Other states, like New York, have high rates of mesothelioma because there are numerous industries and jobsites with known asbestos use. Learn more about how your state is impacted by asbestos.

Asbestos Exposure Across the United States

When asbestos fibers are inhaled, they can easily become stuck in the linings of the lung, abdomen or heart. Because the fibers are so durable, the body isn’t able to break them down. Over time, asbestos fibers can cause scarring and inflammation, which may eventually lead to tumors. In addition to several types of asbestos cancer, the mineral may also cause chronic lung diseases, like asbestosis. Asbestos-related illnesses like mesothelioma often have a latency period of 10 – 50 years before symptoms like shortness of breath start to show, making them difficult to diagnose and treat.

Although asbestos is not yet banned on a national level, there are both federal and state laws in place regarding asbestos use and safe removal. In order to support occupational safety and protect the general public, the EPA and Occupational Safety and Health Administration (OSHA) also have strict guidelines and safety procedures in place to help prevent exposure on the job and from public buildings.

For individuals and homeowners, it’s also important to abide by asbestos abatement laws. Removal of asbestos materials should never be attempted by anyone other than a certified professional, who is trained and understands the local, state and federal regulations to ensure the toxin is properly disposed of. The proper handling of remaining materials that contain asbestos is essential to preventing exposure. It’s important to remember that any amount of asbestos exposure is considered dangerous, and avoiding contact with the toxin is vital to preventing diseases like mesothelioma.