Mesothelioma and Asbestos Exposure in Maryland 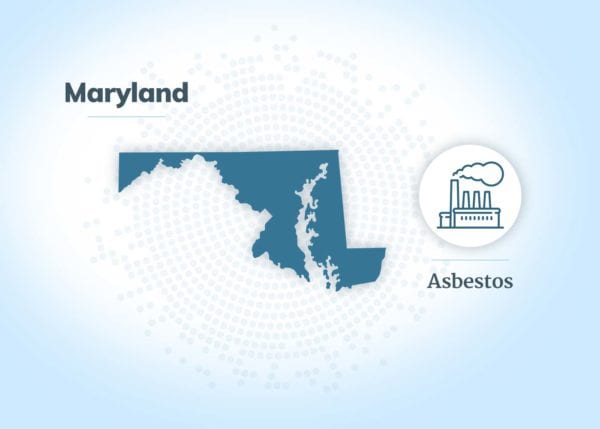 Maryland is a small state, but given its proximity to several other states and Washington, D.C., it has many visitors, commuters, and other travelers who pass through on a regular basis that can be exposed to asbestos.

Asbestos Use in Maryland Work Environments

By far the greatest concentration of asbestos exposure and mesothelioma diagnoses in Maryland has occurred in the Baltimore area, mostly due to the shipbuilding and other industrial efforts taking place there.

Not only is Maryland a coastal Mid-Atlantic state, but the Chesapeake Bay offers a lot of opportunities for shipyards, dry docks and other shipping concerns where workers would have been exposed to asbestos. Companies like Bethlehem Steel, which built a shipyard at Sparrows Point, were responsible for thousands of individuals becoming ill with mesothelioma, asbestosis, and other asbestos-related conditions. Other ship manufacturers in the state include Maryland Shipbuilding & Drydock Company, Newport News Shipyard, and Key Highway Shipyard.

Asbestos was used heavily in the power industry to prevent fires and insulate wires from electricity and heat. Maryland was home to the Calvert Cliffs Nuclear Power Plant, which was a particularly dangerous worksite due to asbestos and other hazardous materials held there. Three other notable power plants to expose their workers to asbestos include Basco Power Electric, Potomac Electric Power Company, and Glen Burnie Powerhouse.

Many college campuses take pride in their old, stately buildings, but that pride can come crashing down when those buildings also contain asbestos, exposing students, faculty, and others to the risk of developing mesothelioma. The University of Maryland in particular had asbestos troubles, with at least one report finding over 90 buildings containing the deadly material on campuses at Catonsville, College Park, and elsewhere. Other higher-ed institutions that have had asbestos exposure problems include Johns Hopkins University, Maryland State College, and Washington College.

Annapolis, MD, is home to the U.S. Naval Academy, which in addition to preparing many naval officers since it opened in 1845, has also been the site of asbestos exposure for some of our bravest veterans. Other military bases within the state have led to similar exposure for sailors, soldiers, airmen, and civilian workers, including the U.S. Army Corporation of Engineers in Aberdeen, the Naval Propellant Factory in Indian Head, and the U.S. Naval Ordnance Laboratory in Silver Spring.

Questions About Mesothelioma and Asbestos Exposure in Maryland?

Maryland has been home to many shipyards over the years, and while all of these worksites present potential for exposing their employees to asbestos, some have been more dangerous than others.

Situated in Baltimore, the Curtis Bay Yard has built, fixed, and provided additional support for the U.S. Coast Guard since it opened in 1899. While it may be small compared to some commercial and naval shipyards, activity at Curtis Bay peaked during World War II, where it employed as many as 3,000 civilians from the Greater Baltimore area. Unfortunately, those workers and others who came later were exposed to asbestos used in the Coast Guard ships they built and repaired, putting them at risk of developing mesothelioma later in life.

While Key Highway Shipyard hasn’t been in operation since 1982, it is possible that many of its former employees could be diagnosed with mesothelioma, since the disease can take 50 years or longer to begin showing symptoms. The site reached its shipbuilding heyday during World War II, when it specialized in converting merchant marine vessels into warships that could be used as part of the U.S. Navy’s fleet.

The Sparrows Point shipyard operated by the Bethlehem Steel Company was later revived as Baltimore Marine Industries. The original company started out as the largest steel mill in the world, but in the late 19th century, shipbuilding and repairs began to increase up to the 1930s and 1940s when it focused on warships for the U.S. Navy. Over the next several decades, the Sparrows Point shipyard revamped its facilities and began to build supertankers that could haul massive amounts of cargo. Despite the several changes of ownership, one thing has remained consistent: the exposure of asbestos to workers at the facility.

Learn more about asbestos exposure in the major towns and cities of Maryland by clicking on the links below. If you worked at any of the jobsites highlighted on these pages, there is a possibility that you may have been exposed to asbestos which is known to cause the terminal cancer mesothelioma.

Beyond the major cities and towns in Maryland, asbestos exposure has also occurred at a number of other job sites. Select a town to see the list of its work sites where asbestos exposure occurred. Asbestos exposure at any one of the sites revealed could put a worker at risk to develop pleural mesothelioma.