Asbestos Exposure and Mesothelioma in Mississippi 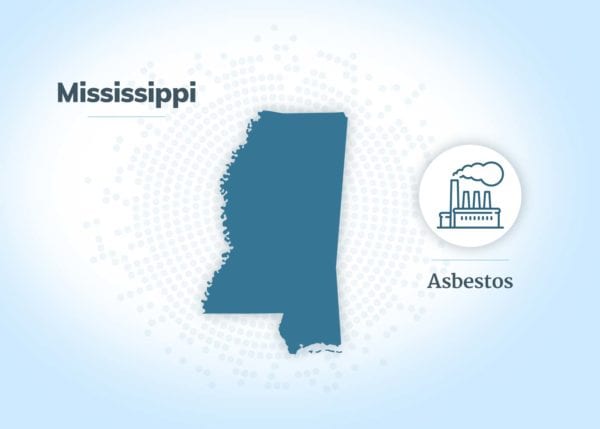 Without any naturally occurring asbestos in the state, Mississippi residents, workers, and visitors are still exposed to the deadly material through a number of other means.

Asbestos Use Across Mississippi Industries

The three worst industries for exposing workers to asbestos in Mississippi are oil, power plants, and shipbuilding.

Mississippi’s coastline is relatively small compared to other states along the Gulf Coast, but it is still an important player in the oil industry. The production of oil and gas started years early as 1903, and since then the state has continued to be one of the largest producers of carbon-based fuels in the country. Given the high amounts of asbestos used in the production of oil and gas, companies like Hess Oil & Chemical, Chevron, Southland Oil, and Grenada Oil Company exposed many employees to the hazardous material.

Power plants are prone to fire danger, and asbestos insulation was often used on pipe fittings, electrical conduits, and mechanical parts, as well as within the power-generating structures themselves. The Grand Gulf Nuclear Power Plant, Jack Watson Powerhouse, and Gulf Power Plant are all Mississippi power companies that are known to have had asbestos issues at some point.

Research from the National Cancer Institute has confirmed that workers employed in maritime professions run a “significantly higher” risk of asbestos disease than the general population. From the mid-1930s until the late 1970s, asbestos insulation was used extensively in the construction of seagoing vessels. Two Mississippi shipyards where workers are known to have been exposed to asbestos include Ingalls Shipbuilding and the Naval Station at Pascagoula.

Asbestos is resistant to many chemicals, as well as heat and electricity, which makes it useful in a variety of chemical processing applications. However, at the same time, those who worked in chemical plants would become exposed to asbestos, putting them at risk of developing mesothelioma later in life. Some of the companies known to have used asbestos include Mississippi Chemical, Spencer Chemical Company, and Vicksburg Chemical Company.

With more than 60% of the state’s land area covered in forests, Mississippi is home to a significant lumber and paper industry. Both of these industries have used asbestos in their production machinery, and many vehicles used to transport and delivery logs, paper, and wood products have asbestos in their brakes, gaskets, and other parts. Some of the companies that have exposed sawyers, millers, and other workers to asbestos include the Hudson Hardwood Flooring Company, the Redwood plant in Vicksburg, Georgia Pacific Pulp & Paper, and the St. Regis Paper Company.

Questions About Mesothelioma and Asbestos Exposure in Mississippi?

With its small but strategically important coastline on the Gulf of Mexico, Mississippi shipyards have contributed significant numbers of vessels to both commercial and naval fleets over the last century.

The Ingalls Shipyard is situated on the mouth of the Pascagoula River where it flows into the Mississippi Sound. Established in 1938, the company’s website claims to have built 70% of the U.S. Navy’s fleet, although it started out building commercial ships and did not begin building naval ships in large quantities until the 1950s. Over the years, the company has employed tens of thousands of shipbuilders, dock workers, and others who have been exposed to the high levels of asbestos used in nearly all ocean-going vessels during the early and mid-20th century.

The Trinity Marine Group holds several shipbuilding concerns, one of which is Trinity Yachts located in Gulfport, MS. The company was formed out of a previous shipyard at Moss Point called Moss Point Marine, and then later purchased Halter Marine to expand its operations. While Trinity Marine Group did not incorporate until 1980, the legacy shipyards purchased by the company likely exposed workers to asbestos during the course of their operation, and those who worked at those locations may be at a high risk of developing mesothelioma.

Learn more about asbestos exposure in the major towns and cities of Mississippi by clicking on the links below. If you worked at any of the jobsites highlighted on these pages, there is a possibility that you may have been exposed to asbestos which is known to cause the terminal cancer mesothelioma.

Asbestos exposure is also a problem if you look beyond the major cities and towns in Mississippi. Select a town to see the list of its job sites where asbestos exposure occurred. Asbestos exposure at any one of the work sites revealed could put a worker at risk to develop mesothelioma cancer.