Mesothelioma and Asbestos Exposure in Washington 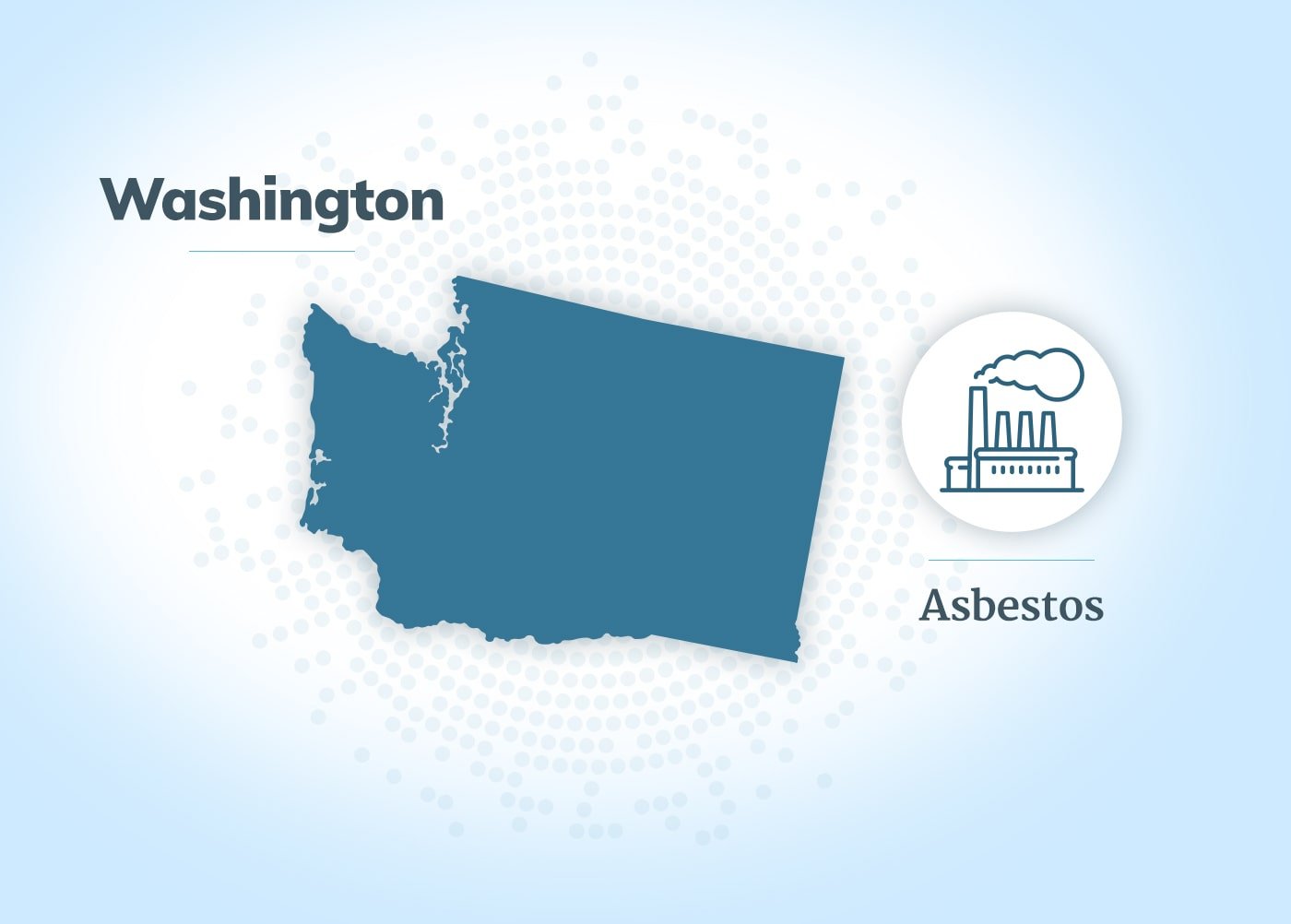 Asbestos and Mesothelioma Statistics in Washington

Together, the mining and maritime industries have made residents and visitors of the State of Washington particularly vulnerable to asbestos exposure.

Washington State’s Cascade, Okanogan, and Rocky Mountain ranges have an abundance of serpentine rock, which is the source of 95% of all commercial asbestos. In addition to five major asbestos mines in the northern part of the state, several serpentine deposits are located in the center of the state in the vicinity of Ellensburg and Wenatchee.

The Northwest Pacific Coast is a major commercial shipping center, with ports in Puget Sound and other areas along the coastline. As a result, cities like Seattle, Tacoma, and Vancouver, WA, all have major shipyards with a history of exposing shipbuilders and dock workers to asbestos, given the large amounts of the material that have been used in ocean-going vessels in the past. A few of the shipyards located in Washington include Talbott Shipyard, Kaiser Shipyard, and Voyage Repair Station.

For decades, the timber industry has been at the heart of Washington State’s economy, including paper and paper products. Asbestos-containing materials are still to be found in the state’s many paper and pulp mills, where they were used in the machinery and materials used in the paper-making process itself, such as drying felts and the adhesives used to affix them. A few of the timber and paper companies operating in Washington include Scott Paper Company, Anderson Middleton Lumber Company, E. K. Wood Lumber Company, and Weyerhauser Timber Company.

Washington State is the first U.S. port of call for tankers from Alaska and home to numerous oil refineries. As petroleum is a hazardous substance at all stages of production, asbestos materials were used almost everywhere from fire doors to the asbestos-lined overcoats, hoods, and gloves. Some of the major petroleum players to expose employees and others to asbestos in Washington include BP Oil, Chevron Chemical, Shell Oil, Texaco, and Mobil.

Several asbestos lawsuits have been filed in Washington by former employees of the state’s several aluminum plants. Aluminum production has been an important industry since World War II, and because the manufacturing process requires high levels of heat, asbestos was often used to protect workers and machinery from damage by fire. ALCOA Aluminum smelters in Vancouver and Wenatchee are notorious for their asbestos exposure, but other companies have had problems as well, including Kaiser Aluminum and Chemical Corporation, INTALCO Aluminum, Harvey Aluminum, and Columbia Aluminum.

Questions About Mesothelioma and Asbestos Exposure in Washington?

Washington has a strong shipping industry, and the use of asbestos in ships of all sizes has led to the risk for developing mesothelioma in many former shipbuilders.

Initially built as a repair site, the Bremerton Naval Shipyard also began building naval ships during World War I. During the Second World War, it helped to repair some of the still-floating vessels damaged at Pearl Harbor, while also helping to replenish the Pacific Fleet decimated during the same attack. In more recent years, the shipyard is involved more in dismantling decommissioned ships (primarily nuclear-powered vessels) and maintaining the U.S. Navy’s “mothball fleet” of inactive ships held in reserve. Through all of the repair and restoration work done over the years, many veterans and civilian workers have been exposed to dangerous amounts of asbestos.

This Seattle shipyard sprang into operation in 1939 with a focus on commercial ships of all sizes, including everything from tugboats to barges. Although a relatively small operation with only a couple hundred workers at its peak, workers at Duwamish Shipyard saw their fair share of asbestos in their construction, repair, and dismantling work. Workers like those at the shipyard are at a much greater risk of developing mesothelioma than the average individual, and some of those workers from Duwamish have gone on to file mesothelioma lawsuits because of that exposure.

Located at the southern border of Washington State in Vancouver, WA, this shipyard was built by Henry Kaiser in direct response to the entrance of the United States into World War II. Combined with his shipyards in other Pacific Coast states, Kaiser was responsible for the construction of more than 1,500 ships for the war effort. Many of the men and women who built those ships, however, were exposed to deadly levels of asbestos, and some of them later were diagnosed with mesothelioma.

Provided below is a list of cities in the state of Washington where asbestos use in the workplace is known to have occurred. Click on a city below to see more detailed information about the specific job sites where asbestos exposure occurred.

Workplace asbestos exposure is also a concern if one looks beyond the major cities and towns in Washington. Select a town below to see the list of its job sites known to have exposed workers to asbestos. Asbestos exposure at any one of the job sites revealed could have placed a worker at risk to develop mesothelioma cancer and other asbestos-related diseases.