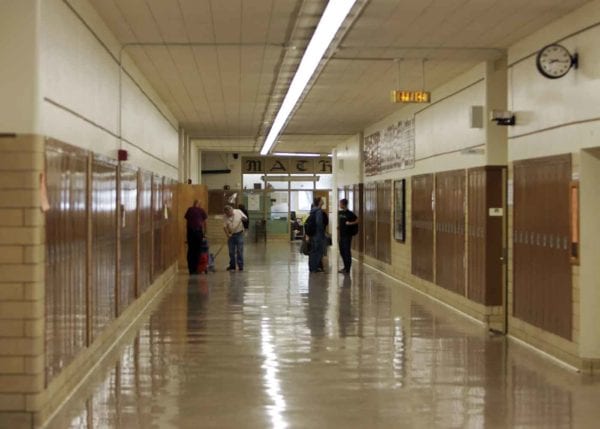 01. Asbestos Use in Schools

How Was Asbestos Used in Schools?

Asbestos is frequently found in construction products used in school buildings. As a result, millions of students and school staff experience exposure to asbestos.

Before 1980, the mineral was commonly used in a variety of products. Nearly half of all primary and secondary school buildings in the United States were built between 1950 and 1969. During those years, asbestos use was near its peak.

Throughout the 1970s, the federal government began regulating asbestos use. By the 1980s, asbestos was largely regulated and no longer used in new production.

There is no safe level of asbestos exposure but asbestos is not as dangerous when in good condition. However, the average age of U.S. schools is about 44 years old. As a result, asbestos materials in schools may be at high risk of wearing down and releasing fibers.

Today, asbestos is found in many locations throughout schools.

Asbestos in older school buildings continues to pose a health risk to anyone in the vicinity. However, untrained individuals should not attempt to move or handle asbestos. If asbestos is found or disturbed, the school should seal the area. Then, abatement professionals can address the issue.

Notable Instances of Asbestos in Schools

Asbestos was used in many schools nationwide. The carcinogen is commonly found in building materials installed before 1980.

Many schools and school districts have faced asbestos concerns.

Asbestos contamination was found in several locations, including classrooms, restrooms and cafeterias.

The presence of asbestos was found in multiple building materials in 1,174 locations across the schools.

Locations of asbestos contamination in Chicago Public Schools include:

However, a 2016 update to the report found only 11 of the 184 schools had taken action to address the asbestos problems.

The complaints resulted from two contractors exposing asbestos flooring materials. This work happened during school registration. Parents and students were in the adjacent library registering for the school year.

As a result, SCAQMD served the Manhattan Beach Unified School District with 27 violations. These violations included failing to have an asbestos management plan. Management plans are required of all public schools with asbestos materials.

Who Is at Risk of Exposure in Schools?

Asbestos use in schools has exposed many individuals to the mineral. This includes students, teachers and school staff.

Exposure can happen at any time and from a variety of sources. Adults should be aware of the risk of asbestos exposure to protect their children and themselves. Secondary exposure may also affect families of those exposed to asbestos at school.

According to the EPA’s Office of Inspector General, the above is especially concerning for younger children.

The relatively young age of students may also be problematic according to the OIG. An OIG report reasoned childhood exposure could increase the risk of developing mesothelioma later in life.

– EPA Office of Inspector General Report on Asbestos in Schools

Asbestos has been found in children’s products on many occasions.

According to the National Institute for Occupational Safety and Health (NIOSH), teachers have a proportionate mortality ratio of 2.1. This mirrors other asbestos occupations, such as plumbers and mechanical engineers.

Teachers and students are not the only people at risk of asbestos exposure in schools. Any school staff and employees may also be exposed.

For example, maintenance workers and janitors may come in contact with asbestos in boiler rooms. Asbestos was commonly used in fire-resistant materials, such as asbestos cloth, asbestos board and thermal systems. School staff may have been exposed to these materials in boiler rooms.

Individuals at Risk of Asbestos Exposure in Schools

Millions of students, school staff and teachers may have been exposed to asbestos in schools.

As a result, these individuals may be at risk of developing asbestos diseases. This could include mesothelioma, asbestosis and asbestos-related lung cancer, among others.

Legal proceedings are a common way to hold parties responsible for asbestos exposure. For example, individuals diagnosed with an asbestos-related disease may file an asbestos lawsuit. This may result in a verdict or mesothelioma settlement. With school exposure, the responsible parties (or defendants) can vary.

In certain instances, exposed individuals may choose to file a lawsuit or claim against the school district.

In 2019, former teacher Lea DiRusso developed mesothelioma from school asbestos exposure. She reached a settlement with the Philadelphia School District. The school district paid her $850,000 for her exposure and subsequent disease.

Exposed individuals may also be able to file claims against the asbestos material manufacturer. This is rarer in instances of school exposure. However, many asbestos companies manufactured products leading to dangerous asbestos exposure. If someone with an asbestos disease diagnosis can tie their exposure to a specific product, they may be able to receive compensation.

An experienced mesothelioma lawyer can advise individuals on the best course of action for their specific cases.

Other Legal Ramifications From Asbestos in Schools

Schools failing to comply with asbestos regulations may be served with violations. This can happen when school districts or administrators are aware of asbestos but do not address the situation. These violations are often assessed by government agencies.

According to AHERA, materials and products in good condition can be considered safe, but an AHERA designated person should monitor them. This individual must ensure corrective actions are performed when the materials begin showing signs of wear or damage.

Some reports have noted difficulties in adhering to AHERA regulations. A 2018 report from the EPA’s Office of Inspector General found several issues among the 10 regional offices tasked with monitoring asbestos in schools. Issues included:

The report also noted between 2011 and 2015, the EPA only conducted about 13% of all AHERA inspections. All other inspections were performed by state agencies. This could lead to non-compliance with larger EPA regulations.

These rules do not extend to private for-profit schools. Colleges are also not covered under AHERA rules.

For example, the National Emission Standards for Hazardous Air Pollutants (NESHAP) regulates how asbestos should be handled. This includes:

Removal of asbestos should always be done by abatement professionals. These regulations aim to ensure the asbestos abatement process is effective. If done correctly, they can also reduce health risks for students, teachers and the general public.