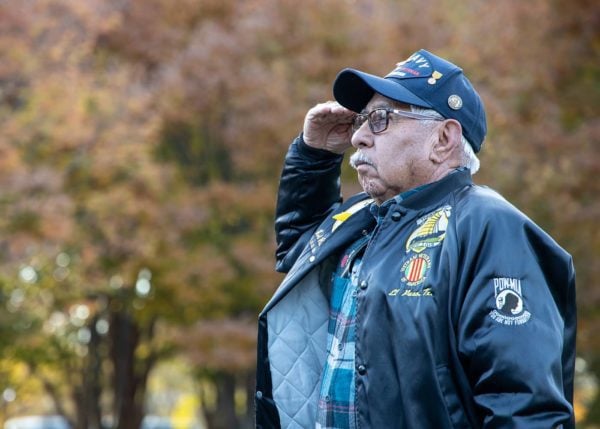 Benefits for Navy Veterans With Mesothelioma

The U.S. Department of Veterans Affairs (VA) offers financial compensation, healthcare and other benefits to U.S. Navy veterans with mesothelioma and other asbestos-related diseases.

Navy veterans who develop an illness or injury as a result of asbestos exposure while serving in the military are eligible for these VA benefits.

Many veterans are diagnosed with mesothelioma as a result of the Navy’s history of heavy asbestos use. Although all military branches used asbestos, reports suggest Navy veterans are among the most at risk of developing mesothelioma or other asbestos diseases.

Navy veterans exposed to asbestos in the military and later develop a disease, such as mesothelioma or asbestos-related lung cancer, may be eligible for compensation. Navy veterans may receive compensation benefits by filing a VA claim.

For veterans with mesothelioma or lung cancer, VA disability compensation payments start at about $3,100 each month.

Learn More About How to File a VA Claim

Navy veterans may also pursue compensation by filing a lawsuit against companies that supplied the military with asbestos products. These lawsuits have an average mesothelioma settlement payout of $1 million – $1.4 million.

Learn More About Other Legal Options for Veterans

Other Benefits for Navy Veterans

Surviving family members may also be eligible to file a legal claim against those responsible for asbestos exposure, such as a lawsuit or asbestos trust fund.

Along with financial benefits, the VA also offers healthcare benefits for Veterans. These benefits can help veterans receive mesothelioma treatment.

Through VA treatment centers, Navy veterans may receive cost-free treatment and services. These services may range from regular checkups to specialized cancer care.

Asbestos Exposure in the Navy

Navy service members faced frequent asbestos exposure. The Navy, as well as other military branches, used asbestos products until around 1980. In one study, researchers reported the Navy began using asbestos as early as the 1880s.

Asbestos was often used by the military as a fireproofing material. Navy service members handled raw asbestos and worked with asbestos-containing products. The Navy’s widespread use of asbestos led to exposure on Navy ships and in shipyards.

For many decades, the Navy did not acknowledge the health effects of asbestos. In the 1940s, government agencies began creating some guidelines for exposure limits. At the same time, medical researchers continued to explore the health impacts. However, Navy service members took little precaution to protect themselves from inhaling asbestos fibers.

When Did the Navy Stop Using Asbestos?

Until the late 1970s, asbestos was used in the construction and repair of Navy ships. By 1985, most uses of asbestos were eliminated.

Navy service members aboard ships were at risk of asbestos exposure in their everyday line of work. Asbestos could potentially be found in every part area of naval vessels from the 1930s through the late 1970s. As a result, Navy veterans with various occupations risked exposure through their duties on the ships.

Some occupations most at risk for asbestos exposure aboard Navy vessels include:

Navy personnel and other ship workers may have come into contact with asbestos-containing materials throughout the ship.

Some of the most common asbestos materials used in shipbuilding include:

These asbestos-containing materials could most commonly be found in storage rooms, boiler rooms, engine rooms and pump rooms. These rooms contained high-heat machinery.

Poor ventilation and tight quarters aboard Navy ships caused asbestos fibers to be easily transferred. As a result, asbestos fibers could also be found in sleeping quarters, cafeterias, mess halls and common areas.

These conditions affected service members on a variety of Navy vessels. Asbestos products were integrated into many different types of Navy ships.

The Navy continued to build vessels with asbestos products until the Occupational Safety and Health Administration’s (OSHA) regulations in the 1970s. These asbestos laws set exposure limits for many industries.

By this time, the impacts of occupational asbestos exposure were well known. As a result, the Navy began substituting materials for asbestos.

Merchant Marines are a supplemental branch of the U.S. Navy. They serve on merchant ships and vessels. Merchant Marines faced asbestos exposure while serving on asbestos-ridden ships.

Despite discontinuing the use of asbestos on Navy ships in the 1970s, the mineral may still be found in some vessels today.

Navy ships were built with many asbestos products. As a result, shipyard workers frequently experienced asbestos exposure while building, repairing and retiring ships.

Workers were often responsible for cutting and sawing raw asbestos for pipe insulation, gaskets and other uses in Navy shipyards. When asbestos-containing products were cut, airborne asbestos could be easily inhaled.

Shipyard workers and shipbuilders were not protected from potential asbestos exposure. Beginning in the 1940s, the Navy began documenting the connection between asbestos and respiratory illnesses. However, shipyard workers continued to handle asbestos without adequate protection for decades.

The U.S. government and U.S. military are not defendants in mesothelioma lawsuits brought by veterans. Claims are made against companies that supplied dangerous asbestos products to the military.
Learn More About Filing a Claim

The Navy is believed to have used asbestos more than any other branch in the military. As a result, Navy veterans are among the highest at-risk groups for developing mesothelioma and other asbestos-related diseases.

Past uses of asbestos continue to create a risk for veterans. Older ships may still contain asbestos components, and asbestos materials may still be found in shipyards.

The latency period of mesothelioma ranges from 10 – 50 years. Navy veterans may be diagnosed with mesothelioma decades after initial exposure.

The health impacts of asbestos on Navy servicemen and shipyard workers were first documented in 1942. Dr. Phillip Drinker, Chief Health Consultant to the US Maritime Commission, studied the health of shipyard workers.

Dr. Drinker’s study details the health risks among shipyard workers at the Bath Iron Works shipyard. Since his study, the long-term health impacts among Navy veterans have been strongly documented.

Navy veterans who may have experienced asbestos exposure should talk to their doctor. A medical professional can help come up with a plan to monitor for any signs of asbestos disease and aid early detection.

Questions About Navy Veterans and Mesothelioma?

Ask a question and Jennifer will respond to you promptly.

OSHA’s National Emphasis Program (NEP) on Shipbreaking: OSHA developed this program to mandate inspections and other practices to limit asbestos in shipyards. OSHA conducts joint inspections with the Environmental Protection Agency (EPA) to identify asbestos products and other environmental contaminants.

The program aims to remove asbestos from high-maintenance areas and protect workers from the dangers of asbestos.

The Asbestos Medical Surveillance Program (AMSP): The Navy created this program to maintain records of service members who have faced occupational asbestos exposure. Doctors conduct chest X-rays and perform lung tests to monitor the health of those who were exposed to asbestos in the military.

This program aims to detect mesothelioma and other asbestos-related diseases early. Although some Navy veterans may have already been exposed to asbestos, early detection is crucial.