Keasbey & Mattison Company in the 1930s 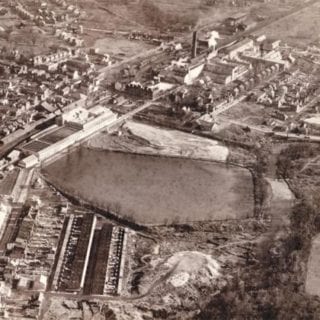 01. Ambler’s History of Asbestos Use

History of Asbestos Use in Ambler, Pennsylvania

Asbestos manufacturing began in Ambler in the 1880s. Access to natural resources and the nearby railroad made the town an attractive location for businesses.

Due to these benefits, Henry G. Keasbey and Dr. Richard V. Mattison moved their pharmaceutical business, Keasbey & Mattison Company, to Ambler. In 1882, Mattison discovered he could create insulation with magnesium carbonate and asbestos.

In 1896, Mattison opened the first asbestos textile plant in the U.S. and Ambler became a leader in asbestos manufacturing.

After Keasbey & Mattison Company established the asbestos textile plant, it became one of the largest local employers in Ambler. The company also shifted its focus from pharmaceuticals to asbestos products. It manufactured a variety of asbestos products, including insulation, roof shingles, brake linings and fireproof curtains.

The company’s success in selling asbestos products led Mattison to purchase an asbestos mine in Quebec. The nearby railroad allowed Mattison to transport chrysotile asbestos from Quebec to Ambler.

Keasbey & Mattison manufactured and sold asbestos products for years. The company’s success in the asbestos industry made Mattison a wealthy man. Mattison owned several businesses, including the town’s bank and all of Ambler’s utility companies. He also funded the construction of the town’s library and opera house.

Keasbey & Mattison employed many people living in Ambler. A Pennsylvania Department of Health (PADOH) report from 1920 stated the company employed 900 men. The asbestos industry provided jobs and economic prosperity for the town.

“Workers mixed raw asbestos fibers from burlap bags into cement slurries before they pressed, dried, and cut the hardened mass into shingles.”

Many workers were exposed to asbestos while employed at Keasbey & Mattison. In some cases, their family members also experienced secondhand asbestos exposure. As a result, many people later developed mesothelioma.

Before the 1970s, the public did not understand the dangers of asbestos. Often, asbestos factory workers in Ambler were not concerned about inhaling asbestos fibers. Workers came home with asbestos on their clothes and exposed family members to the mineral.

Beginning in the 1930s, companies also started dumping asbestos in several piles throughout Ambler. The asbestos piles were nicknamed the white mountains of Ambler.

At times, homes and vehicles close to the large asbestos piles were covered with asbestos dust. There were also playgrounds nearby and children were known to play in the “White Mountains.”

Asbestos manufacturing continued in Ambler until 1987. At that time, Keasbey & Mattison’s parent company, Nicolet Industries, filed for bankruptcy after facing more than 60,000 asbestos-related lawsuits. If you were exposed to asbestos in Pennsylvania at a commercial, residential or military site and have been diagnosed with mesothelioma, you may be entitled to compensation.

For decades, asbestos companies dumped asbestos in piles in Ambler. After the dangers of asbestos became well-known, the town needed help cleaning up asbestos to protect residents.

Citizens in Ambler realized the dangers of asbestos in the 1970s. In 1973, the Environmental Protection Agency (EPA) began remediation efforts at the asbestos dumping sites.

Over the years, the EPA has added several asbestos piles in Ambler to their Superfund list. Superfund sites are areas contaminated with hazards such as asbestos. The Superfund program managed by the EPA allows the agency to clean up hazardous areas and protect the public.

In 1974, the EPA documented the asbestos piles contained 1.5 million cubic yards of asbestos waste spanning more than 25 acres of land.

The EPA performed remediation and removal efforts at the site over several years to decrease immediate health effects.

In 1986, the Ambler asbestos piles were placed on the National Priorities List of hazardous waste sites. This means the site was eligible for long-term remediation supported by the federal Superfund program.

Through the Superfund program, the Potentially Responsible Party (PRP) responsible for the asbestos dumping in Ambler helped pay for the removal and capping of contaminated soil. A fence and signage were placed around the site and trees were planted.

The EPA’s cleanup efforts finished in 1993. Ambler was taken off the National Priorities List in 1996. The site is still monitored to protect the health of Ambler residents.

In 2009, the BoRit Superfund site in Ambler was added to the National Priorities List. The EPA added the site to the list after an advocacy group called Citizens for a Better Ambler lobbied for it.

Asbestos manufacturers dumped asbestos-containing materials at the BoRit Superfund site from the early 1900s to the late 1960s. As a result, the asbestos pile spanned 2.5 acres.

The EPA covered all the asbestos-containing materials in the area to protect against exposure. The EPA’s cleanup of the BoRit Asbestos Superfund site was completed in 2017. The EPA will continue to maintain and oversee the site long-term.

Health Impacts of Asbestos in Ambler

As a result of years of asbestos manufacturing in Ambler, many workers and their family members experienced asbestos exposure. This caused thousands of individuals to develop mesothelioma and other asbestos-related diseases.

It can take 10 – 50 years for asbestos diseases such as mesothelioma to present with symptoms after initial asbestos exposure. As a result, Ambler residents continue to face elevated cases of asbestos-related diseases.

According to a study published in 2011 by the Pennsylvania Department of Health (PADOH), mesothelioma incidence was 3.1 times higher in Ambler than the statewide average.

The researchers also stated mesothelioma rates for neighboring towns were not elevated.

According to PADOH and the Agency for Toxic Substances and Disease Registry (ATSDR), the mesothelioma cases are most likely related to exposure in asbestos manufacturing facilities in Ambler.

More recent studies have also found an elevated impact of mesothelioma and asbestos diseases in Ambler. A 2016 study from the Environmental Working Group (EWG) Action Fund analyzed the impact of asbestos on Montgomery County, which includes Ambler. Researchers found Montgomery County ranks 11th out of 726 counties in the nation with the most mesothelioma and asbestosis deaths from 2000 to 2014.

A mesothelioma diagnosis may not occur until many years after initial asbestos exposure. Although asbestos Superfund sites in Ambler have been cleaned up, citizens who were exposed prior to remediation may be at risk of developing an asbestos-related disease.

Residents who came into contact with asbestos in the past may still be at risk of developing an asbestos-related disease. Anyone with a known history of asbestos exposure should consult with their doctor. A physician can help monitor for any signs or symptoms of asbestos diseases.