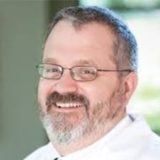 Dr. Mulligan joined the staff at the Helen F. Graham Cancer Center & Research Institute as a member of the thoracic surgery service in April 2008—just after completing 21 years in the military serving his country. In 1985, he was selected by the Army to attend medical school, which he graduated from in 1989. Three years as a general surgeon ensued in Fort Eustis, Virginia at McDonald Army Community Hospital. In 1997, he was selected by the Army for a civilian thoracic surgery residency. Upon completion of this training in 1999, he was assigned as a cardiothoracic surgeon at Walter Reed Army Medical Center in Bethesda, Maryland where he quickly rose to chief of the thoracic surgery section and chairman of the thoracic tumor board by March of 2000. From 2003 – 2004 he served as Chief of Thoracic Surgery with the 28th Combat Support Hospital in Iraq and then again in 2006-2007 as chief of general and thoracic surgery. Upon his return from Iraq, Dr. Mulligan resumed his duties at Walter Reed Army Medical Center before retiring from active duty in March 2008.

At the Helen F. Graham Cancer Center & Research Institute, Dr. Mulligan remained on staff until September of 2012 at which time his talent was pursued to build the Thoracic Surgical Oncology Service at Centra Alan B. Pearson Regional Cancer Center in Virginia. After successfully completing this task, in November 2014, for which he was recruited, Dr. Mulligan returned to Christiana Care’s Helen F. Graham Cancer Center & Research Institute where he assumed his current post as chief.