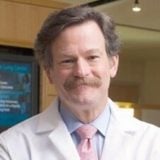 Dr. Larry R. Kaiser is an internationally renowned thoracic surgeon, researcher and author who currently serves as head of the Temple University School of Medicine in his hometown of Philadelphia, Pennsylvania. Dr. Kaiser’s research has largely centered around lung cancer, mesothelioma and mediastinal tumors; in the early 1990s, he made great contributions to the practice of video thoracoscopy, a type of surgery that involves inserting a scope and camera into a patient’s chest.

Over the course of his career, Dr. Kaiser has brought his expertise to many of the country’s top cancer centers and universities. He began his career at Memorial Sloan-Kettering Cancer Center in New York City as a member of the thoracic surgery staff, and taught at the neighboring Cornell University Medical College. He later practiced and taught at the Washington University School of Medicine in St. Louis and the University of Pennsylvania in Philadelphia, where he was named chairman of the Department of Surgery.

Prior to his move to Temple University in April 2011, Dr. Kaiser served as president of the University of Texas Health Science Center in Houston, where he also taught surgery and cardiothoracic and vascular surgery.