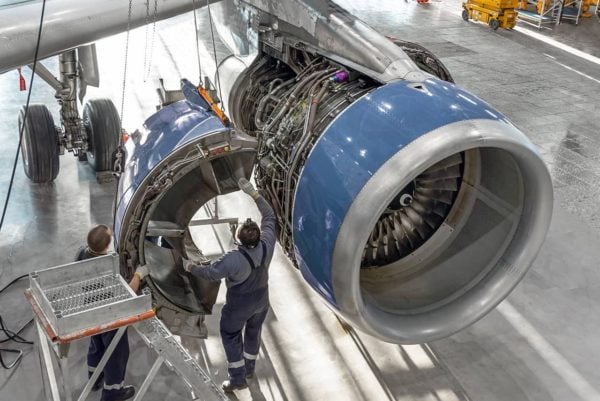 How Are Aircraft Mechanics Exposed to Asbestos?

Before the 1980s, manufacturers of aircraft parts often used asbestos. The mineral was useful in the aviation industry because of its durability and fire resistance. Common parts made with asbestos were brake pads, valves and gaskets. This put aircraft mechanics at a high risk of asbestos exposure.

When installing or repairing asbestos-containing aircraft components, fibers can become airborne. Mechanics may inhale or ingest these fibers. Asbestos exposure may lead to diseases such as mesothelioma.

Although regulations now limit asbestos use in products, aircraft mechanics may still be at risk. Mechanics who work on older airplanes may handle some parts that contain asbestos.

Since the early 1900s, many companies manufactured products with asbestos. Companies that supported the aviation industry manufactured asbestos insulation, sealants and other materials.

While repairing aircraft, mechanics may have come in contact with these asbestos products. Aircraft mechanics also used fireproof equipment such as asbestos gloves and blankets to protect themselves from hot machinery.

Aircraft mechanics may have been exposed to asbestos from:

Despite knowing the dangers of asbestos, companies used the mineral for decades. As a result, these negligent companies continue to put military and civilian aircraft mechanics at risk.

Common Places Asbestos Is Found in the Aircraft Mechanic Industry

Civilian and military aircraft mechanics may risk asbestos exposure at various jobsites. Civilian employees may work for an airline, repair hangar or a private company. Military employees may work at an Air Force base in the United States or abroad.

Aircraft mechanics work in different areas of an aircraft. Many of these areas may have previous or ongoing asbestos contamination.

Locations in aircraft that often exposed aircraft mechanics include:

Today, asbestos use is more restricted in the United States. However, aircraft with older parts may still put mechanics at risk of exposure. Aircraft mechanics may also be at higher risk of inhaling asbestos fibers while working in enclosed spaces, such as the cockpit.

Besides aircraft mechanics, there are other aviation professions at risk of asbestos exposure. These occupations may have used the same asbestos products and perform similar work.

Other at-risk trades in the aviation industry are:

In addition to occupational exposure, individuals at home may also be at risk of secondary asbestos exposure. Family members may be exposed if mechanics bring asbestos-contaminated clothing into the home.

Retired and current aircraft mechanics may be at risk of developing an asbestos-related illness. Symptoms of asbestos-related diseases, such as mesothelioma, may take decades to present. Asbestos lung cancer and asbestosis may also present years after exposure.

– Claudio Bianchi and Tommaso Bianchi, Center for the Study of Environmental Cancer–Italian League against Cancer

Individuals who handled asbestos parts may later develop health issues. Individuals diagnosed with mesothelioma as a result of exposure may be eligible to file a lawsuit or bankruptcy trust fund claim.

Mesothelioma patients, including aircraft mechanics, have filed lawsuits against companies for asbestos exposure. Major aviation companies such as Lockheed Martin Corporation and Boeing Company are often sued. Pursuing a lawsuit can provide aircraft mechanics and their loved ones with financial compensation through a jury verdict or settlement for mesothelioma.

In 2016, the wife of a mesothelioma victim won a lawsuit against Northrop Grumman Systems Corporation. The plaintiff’s husband worked as an aircraft mechanic for the company. He experienced workplace asbestos exposure and later developed mesothelioma. The judge ordered Northrop Grumman Systems Corporation to pay approximately $9 million to his wife and estate.

Experienced mesothelioma lawyers can explain lawsuits and other legal options. For instance, those diagnosed with an asbestos disease may be eligible to file a mesothelioma trust fund claim.

Federal regulations for asbestos are overseen by the Environmental Protection Agency (EPA). The Occupational Safety and Health Administration (OSHA) also manages workplace safety for asbestos. The aviation industry follows these standards for asbestos handling and disposal.