Mesothelioma and Asbestos Risk for Firefighters 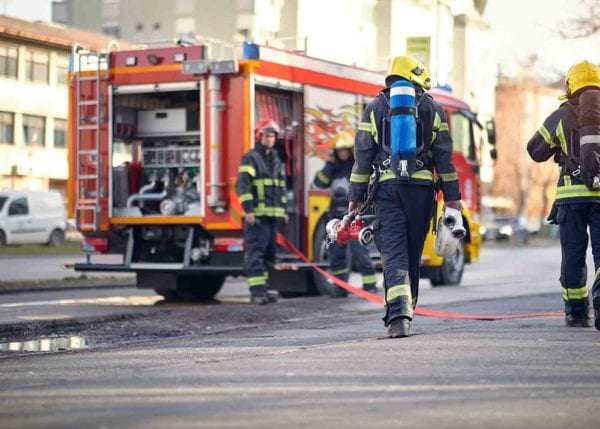 How Are Firefighters Exposed to Asbestos?

Firefighters may experience asbestos exposure from burning buildings. Homes and buildings constructed before 1980 often contain asbestos. During a fire, asbestos-containing materials may become disturbed and broken. The asbestos fibers in the air pose a risk to firefighters. If inhaled or ingested, asbestos fibers can lead to asbestosis, lung cancer and mesothelioma.

Asbestos exposure may also occur after a fire. During cleanup efforts, broken asbestos materials and debris still pose a risk to firefighters and others nearby.

In the past, many people did not understand the lasting health effects of asbestos. As a result, firefighters may not have been provided with enough personal protective equipment (PPE) in the line of duty.

Today, firefighters and first responders commonly wear PPE to prevent dangerous exposure. However, asbestos exposure may still occur if the equipment is removed or not properly fitted.

Many older buildings were constructed with asbestos products. When these products burn, asbestos fibers can become airborne. Asbestos building materials firefighters may have been exposed to include:

Firefighters also risked exposure to asbestos blankets and fireproof clothing made with asbestos.

Today, United States laws and regulations limit the use of asbestos products. However, asbestos may still be present in older homes and structures.

There are several occupations similar to firefighters that may also experience asbestos exposure. First responders to a fire or other natural disaster may be exposed to friable asbestos. Similar at-risk trades include:

Additionally, family members of firefighters and first responders may be at risk of asbestos exposure. At the scene of a fire, asbestos dust may settle in a firefighter’s hair and clothing. Loved ones may experience secondhand asbestos exposure from dust brought into the home.

On September 11, 2001, firefighters and other first responders responded to the World Trade Center in New York City. In a rush to get to the scene, some firefighters and rescue workers weren’t wearing protective gear, including respirators.

At the scene, thousands of firefighters and first responders were exposed to dust containing concrete, glass and asbestos fibers.

The air remained hazardous for weeks after the terror attacks. First responders and the public received insufficient warnings about the dangerous air quality.

In the years following the 9/11 terror attacks, several studies documented a link between firefighters at the scene and increased risks of health issues such as:

Due to the latency period of mesothelioma and other cancers, more cases may be reported.

Firefighters are at higher risk of certain cancers, including mesothelioma. High cancer rates are a result of occupational exposure to asbestos and other debris.

In 2015, the National Institute for Occupational Safety and Health (NIOSH) published research compiled from about 30,000 firefighters.

Researchers found cancer risk was much higher for firefighters than the general population. The most common types of cancer that affected firefighters were:

Researchers also found firefighters had a mesothelioma incidence rate twice as high as the general population.

Firefighters who spent more time at fires also had a greater chance of lung cancer diagnosis or death.

Routine cancer screenings allow doctors to diagnose diseases such as lung cancer or pleural mesothelioma earlier. In many cases, more treatment options are available for mesothelioma patients diagnosed in stage 1 and stage 2 compared to later stages.

Other financial compensation options may also be available to firefighters who experienced occupational asbestos exposure.

In 2007, dozens of firefighters in Everett, Washington, filed an asbestos lawsuit against the city government. The firefighters experienced asbestos exposure during training exercises in city-owned buildings. The group was not wearing the appropriate protective equipment.

To end the lawsuit, the group of firefighters and the city of Everett agreed to a settlement. The city agreed to pay for lifetime medical monitoring for the firefighters.

Due to the dangers firefighters face, some states have passed presumptive cancer coverage laws. Presumption laws shift the burden of proof away from firefighters with cancer. This means courts can assume a firefighter’s cancer is a result of duty-related exposure.

Presumption laws may make it easier for firefighters to receive financial compensation and benefits.

These laws may vary between states and only cover certain types of cancer. An asbestos attorney may help firefighters understand their state’s qualifications.

To compensate 9/11 firefighters and other first responders, Congress established the 9/11 Victim Compensation Fund (VCF). The original VCF fund was established in 2001 and closed in 2004. The Zadroga Act reopened the fund in 2011.

In 2019, the VCF was again reauthorized with $10.2 billion for claims through 2090. Victims of asbestos exposure and their loved ones may still file a claim and receive a payout from the fund.

Firefighters face a high risk of occupational cancer, including mesothelioma. As such, there are various actions firefighters can take to help prevent exposure to hazards, such as asbestos.

Firefighters today are provided self-contained breathing apparatuses (SCBA). SCBA helps firefighters breathe in smoke-filled areas and other spaces with toxic dust and chemicals. During an operation, firefighters should wear the SCBA at all times.

Adhere to Safety Regulations and Training

Fire departments must also adhere to regulations created by the National Fire Protection Association (NFPA). Some of these regulations include the standard for breathing air quality and standards for personal protective equipment and protective ensembles. By closely following the requirements laid out in NFPA, firefighters may avoid unnecessary exposure.

Some states are also passing laws to protect firefighters. In 2020, Florida signed a bill for The Firefighter Cancer Decontamination Equipment Grant Program. The program provides funds each year for training, equipment and supplies to help prevent occupational exposure.

For states without such programs, firefighters can be proactive in talking to their department about additional training opportunities. There may be conferences, online programs and other training options available.

Decontaminate Gear After a Fire

To decrease the risk of asbestos exposure after a fire, firefighters should:

Gear should be decontaminated after an operation. Individual stations may have protocols in place for this. Firefighters should also take care to keep any potentially contaminated gear and clothing outside of their homes. This could lead to secondary exposure among family members.

Firefighters should keep these safety tips in mind while working in their firehouse and during training exercises. Older buildings may contain asbestos materials.

It’s also important for firefighters to undergo regular medical exams and screenings. They should talk to their health care team about potential exposure to hazards such as asbestos. Regular screenings could help with early detection of an asbestos-related disease.

Firefighters may seek financial compensation if they develop an asbestos illness from occupational exposure. A mesothelioma law firm may help firefighters understand their legal options.