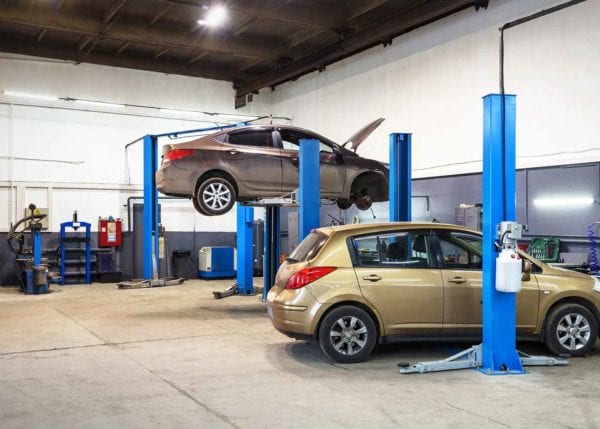 01. Asbestos Use in Automobiles

How Was Asbestos Used in Automobiles?

Asbestos was frequently used in the automobile industry in various vehicle components. The mineral was commonly used in these settings from the early 1900s to the 1980s.

However, asbestos-containing car parts can become easily damaged through normal wear and tear. They often need replacement or servicing, which can disturb asbestos fibers.

As a result, automobile mechanics, technicians and other automotive workers were susceptible to asbestos exposure. This includes vehicle enthusiasts, particularly those working with car products produced before 1980.

Repair work of any kind conducted on asbestos parts can lead to asbestos exposure.

Today asbestos is rarely used in automotive parts in the United States. However, workers are still at risk of exposure. Asbestos fibers in older parts may become airborne during service, removal or restoration. Inhaling these fibers poses a health risk to current automotive workers.

Many automotive companies used asbestos components. This includes well-known brands such as Ford, General Motors and Chrysler. Some companies manufactured these parts in-house. Other companies may have purchased them from secondary asbestos companies.

Any company that used or manufactured asbestos parts may have exposed auto workers and consumers to the mineral.

Borg-Warner Automotive, Inc. was formed in 1928.

The company began as a partnership between several preexisting automotive companies:

The company produced many automotive components, including brake linings, transmissions, clutch linings and other friction parts. Many of these products contained asbestos.

Other products may also have contained asbestos between 1928 and the 1980s, when the company stopped using asbestos in its products.

Borg-Warner’s decades of asbestos use led to rising litigation costs for the company. Successful asbestos lawsuits against Borg-Warner are paid from the company’s own funds. In 2016, the company set aside $441 million to cover future and current asbestos costs.

By the early 1940s, Advance Stores had 21 locations. The company continued to expand across the eastern U.S. In 1978, Advance Stores dropped its household products and expanded its automotive offerings, officially becoming Advance Auto Parts.

Advance Auto Parts has been named in many asbestos lawsuits for its role in exposing individuals to asbestos. It continues to pay asbestos claims from its own funds.

Allied Signal, Inc. was founded in 1920 as a chemical company. Since its founding, the company has undergone several mergers and acquisitions.

Major changes to the company’s brand lineup include:

These expansions brought the company into the automotive industry, as well as many others. The growth also further entrenched the company in producing asbestos-containing goods. For example, Allied Signal’s automotive products included brake linings from Bendix Corporation. These brake parts contained encapsulated chrysotile asbestos.

Allied Signal and its subsidiaries manufactured asbestos products from the 1960s through the late 1970s. The company’s asbestos usage exposed many workers across various industries to the mineral.

As a result, the North American Refractories Company (NARCO) Asbestos Personal Injury Settlement Trust was established in 2005. This asbestos trust fund handles exposure claims for Allied Signal, Inc. and some of its subsidiaries.

Other Companies That Caused Exposure

A number of other companies manufactured or used asbestos-containing parts for cars, trains and other forms of transportation. This wide use of asbestos materials put many people at risk of exposure.

Who Is at Risk of Exposure From Automobiles?

Individuals who worked around automobiles built before 1980 may have been exposed to asbestos. When asbestos-containing products are disturbed, fibers may become airborne and cause asbestos-related diseases, such as mesothelioma.

Although asbestos use has been regulated, workers can still be exposed when working with older vehicles. Anyone with occupational asbestos exposure from automobiles is at risk of developing asbestos cancer.

There are many different ways employees in the automotive industry have been exposed to asbestos. For example, if involved with the manufacturing process, workers may have had to cut and trim pieces of asbestos insulation to fit the car body.

Auto mechanics and technicians may have been exposed when replacing old parts, repairing components that have faced heavy wear and tear and disposing of old equipment.

Brakes and brake linings contained especially high levels of asbestos. In a study from 2004, researchers found 90,000 chrysotile asbestos fibers in each nanogram of brake dust. This asbestos dust was often released when driving, servicing these parts put workers at risk of inhalation or ingestion of fibers.

Asbestos-containing brakes may have fibers in:

Researchers in a 2018 study from the Nelson Institute for Environmental Studies at University of Wisconsin-Madison found auto mechanics working on brakes are at increased risk for mesothelioma and other asbestos-related diseases when compared to the general public.

Auto technicians and mechanics were not the only individuals prone to asbestos exposure. When large amounts of asbestos are disturbed, anyone in the vicinity may be exposed. This includes anyone inside auto shops or vehicle plants.

Exposure may also extend to family members, through secondary asbestos exposure. For example, workers coming home with asbestos on their clothing may expose their loved ones to the fibers.

Automotive workers who have developed an asbestos disease from occupational exposure may be eligible for financial compensation. If exposure can be tied to specific products or companies, individuals may be able to file for compensation from those parties.

There are three main types of mesothelioma compensation:

Each compensation option has specific eligibility requirements. A mesothelioma attorney can help diagnosed individuals and their loved ones determine which option is best for them.

In 2019, a Los Angeles jury awarded $34 million to an auto mechanic and his wife. The mechanic spent many years working alongside asbestos-containing Ford Motor Company brakes. As a result, he developed mesothelioma. The jury found Ford 100% responsible for his illness. The award included:

Asbestos handling recommendations for automobile shops differ based on frequency of asbestos exposure and type of work.

These work practices can help prevent asbestos exposure in automotive workers. In fact, researchers in a 2004 study found “the cumulative exposures of brake mechanics who worked in garages with dust-control measures in place were substantially lower.”

The OSHA recommendations above are typically used by trained automotive professionals. Car enthusiasts should not attempt to replicate these methods as a way to “safely” handle asbestos parts.

If at-home mechanics are working with older cars or suspect the presence of asbestos in car parts, they should take precautions to limit the potential of exposure as much as possible. To help prevent asbestos exposure, home mechanics should:

In order to avoid asbestos exposure, home mechanics and those with classic cars may choose to get work done at a professional car shop. These shops are best equipped to protect workers from asbestos exposure. The only way to safely avoid exposure is to avoid handling asbestos at all.