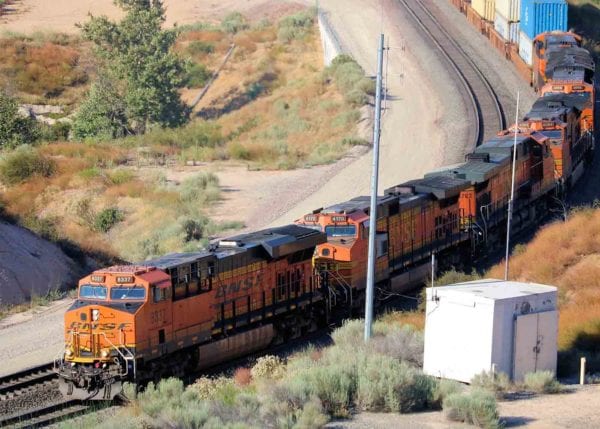 How Are Railroad Workers Exposed to Asbestos?

Asbestos was used in the railroad industry mainly for strength and heat resistance. Many railroad structures and equipment faced friction and high temperatures. Asbestos helped materials to withstand heavy use and offered fire prevention.

Asbestos was used in railroad products from at least the 1930s until the 1980s. The mineral was used in many products that could be found in rail houses, repair shops, railcars and more. As a result, a variety of individuals were at risk of asbestos exposure. Individuals who laid down the railroad tracks, repaired railroad structures or equipment, operated or traveled on locomotives may have been exposed to asbestos.

Although asbestos use in the railroad industry stopped in the 1980s, old products may still pose an exposure risk. As the products face wear and tear, damage and aging, asbestos fibers may become airborne. As a result, railroad work is considered a high-risk asbestos occupation.

Asbestos was used throughout construction materials and equipment in the railroad industry. Railroad employees may have been exposed to asbestos from:

Asbestos was frequently used in construction products within passenger cars. Asbestos insulation was particularly common in the railroad industry. It was used in boilers, engine rooms, electrical panels and other components facing high temperatures.

Railroad companies across the country have exposed workers and passengers to some of these asbestos-containing products. The Flintkote Company and American Standard, Inc. are among the manufacturers known to supply railroad companies with asbestos products.

Common Places Asbestos Is Found in the Railroad Industry

All train types may have contained asbestos, including freight trains and passenger trains. It was also used throughout rail yards, rail shops and other areas in the railroad industry.

Asbestos materials were most common in areas facing high temperatures, friction or heavy use in the railroad industry. Locations in the workplace that often exposed railroad employees include:

Asbestos was particularly common in steam engines. Boilers are the main component of steam engines. Fuel powered the boiler to heat water and convert it into steam. As a result, the boiler reached extreme temperatures. Asbestos insulation and other components in the boiler room helped equipment withstand this heat while preventing fires.

The boiler room and other parts of the train could often have poor ventilation. Less ventilation allows for higher concentrations of asbestos fibers. This could pose a greater risk of exposure for those in the area.

Several other trades were also at risk of exposure from the railroad industry. For example, passenger trains may have exposed servers, cooks, baggage handlers and other train crewmembers. Those who worked in railroad shops, repair shops and rail yards also may have been exposed.

Railroad workers exposed to asbestos face health risks, such as mesothelioma cancer, lung cancer, asbestosis and other asbestos cancers. In a study conducted in Belgium from 2001 to 2009, researchers found railroad workers face a significantly higher risk of mesothelioma mortality compared to the general population.

Some studies suggest older employees may be at great risk of developing an asbestos illness if they worked with steam locomotives. Before the 1950s, locomotives were primarily powered by steam rather than diesel. Asbestos was most common with steam-powered equipment, putting railroad workers at significant risk of occupational exposure.

For instance, railroad workers may seek compensation through the Federal Employers Liability Act (FELA). These are civil action lawsuits against the employer for negligence leading to asbestos exposure. FELA takes the place of a typical workers’ compensation program.

Claimants must have a negligence-related injury, such as a mesothelioma diagnosis after wrongful exposure.

Many claimants have filed successful lawsuits under FELA and were awarded compensation.

In 2006, the widow of railway worker Ray Williams won a verdict of $7.4 million against CSX Transportation. Williams worked for the company from 1962 to 1999. During this time, he frequently worked with asbestos materials. Williams claimed the company neglected to inform him of the dangers of exposure. He was later diagnosed with mesothelioma and passed away.

FELA does not apply to all railroad companies. To qualify, companies must operate in multiple states. An experienced lawyer can help individuals understand eligibility. If FELA doesn’t apply, victims may choose to pursue a lawsuit against the asbestos manufacturer or another type of mesothelioma claim.

An asbestos attorney can help victims determine their eligibility for an asbestos lawsuit, FELA claim and other compensation options.