01. What Are Asbestos Tiles?

What Are Asbestos Tiles?

Asbestos tiles were a common construction material used until the 1980s. There were three main varieties of tiles: floor tiles, ceiling tiles and wall tiles. Floor and ceiling tiles were the most common.

Asbestos was popular in building materials due to its qualities of heat resistance, strength, durability and insulation. Asbestos tiles were widely used because the flooring could hold up to high-traffic areas. Asbestos ceiling tiles also added durability and fireproofing to the buildings.

Asbestos tiles were used often until the 1980s. The mineral became highly regulated around this time after the health risks were more widely known.

Exposure to asbestos materials can cause serious health issues, such as lung cancer and mesothelioma.

When Were Asbestos Tiles Used?

Asbestos was a common additive in ceiling treatments. The mineral was often used in ceiling tiles and paper backing for the tiles. Some adhesives used to affix ceiling tiles together, such as mastic, also contained asbestos. Even in older homes that do not have ceiling tiles, ceilings may still contain asbestos. During this same time period, asbestos popcorn ceilings were also popular.

Asbestos ceiling products were popular for their low cost and fire resistance. Ceiling tiles with asbestos, in particular, were popular from the 1950s to the 1980s.

These and other companies knowingly exposed thousands of people to asbestos. In many cases, the companies eventually went bankrupt and created trusts to compensate exposed individuals.

Where Are Asbestos Ceiling Tiles Found?

Homes and buildings built before the mid-1980s are most likely to contain asbestos ceiling tiles. Homeowners and tenants should review building construction dates to get an idea of if asbestos may be in the building. Building and homeowners should also check to see if the ceilings were ever replaced or renovated.

Due to Environmental Protection Agency (EPA) regulations enacted in the 1970s and 1980s, ceilings in homes and buildings constructed after 1980 are not likely to contain asbestos.

Ceilings with asbestos tiles may be recognized by several names, including drop ceilings, suspended ceilings and acoustic ceilings.

Asbestos floor tiles came in two main varieties: vinyl tiles and asphalt tiles. The mineral was incorporated for strength, heat resistance and durability. Vinyl and asphalt asbestos tiles could contain up to 70% asbestos by weight.

Asbestos floor tiles were largely manufactured between the 1920s and 1970s:

Once asbestos regulations arose in the 1970s and 1980s, companies stopped using asbestos in their products. However, stockpiled asbestos flooring materials may have been installed in homes even after production ceased.

Homeowners, tenants and building owners should not worry about asbestos in flooring manufactured after the 1990s. For instance, new vinyl or laminate flooring options are not made with asbestos.

These companies manufactured many asbestos products. Several of the companies would go on to declare bankruptcy due to mounting asbestos litigation costs from exposed individuals.

Vinyl and asphalt asbestos tiles were popular asbestos-containing flooring options incorporated in buildings and homes. These two types of asbestos floor tiles had differing properties, including:

How to Identify Asbestos Tiles

Asbestos tiles can be difficult to identify, as asbestos fibers are not visible to the naked eye. Additionally, not all floor and ceiling tiles used in the 20th century contained asbestos. The easiest way for homeowners and building owners to be certain if their tiles contain asbestos is to hire an asbestos abatement professional. They can inspect potential asbestos-containing materials and take samples for testing.

However, some visual clues can help building owners and homeowners be aware of the potential of asbestos. Size, appearance and installation date of floor and ceiling tiles are all indicators that asbestos may be present.

Square floor tiles installed between 1920 and 1980 are most likely to contain asbestos.

Ceiling tiles with asbestos were often square or rectangular. They can be identified by the trademark pinhole markings and powdery appearance. 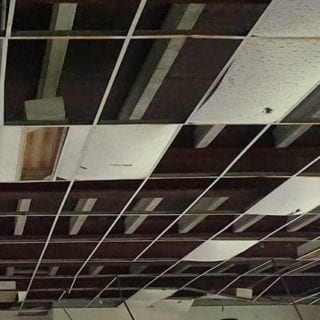 Asbestos ceiling tiles are usually light in color. The surface of the tile will often have mild texturing, such as pinholes on the surface. 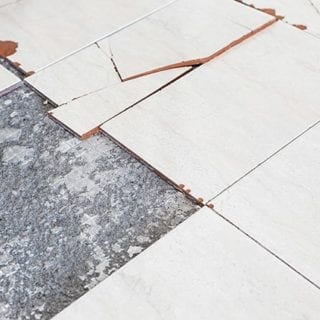 How to Deal With Asbestos Tiles

Homeowners and building owners should never attempt to remove or cover asbestos tiles on their own. Only licensed abatement professionals should handle asbestos materials.

Any amount of exposure to asbestos fibers can potentially cause serious health issues, such as mesothelioma. DIY (do-it-yourself) asbestos removal is not recommended and can be very dangerous.

There are a few options for dealing with asbestos materials, including removal, encapsulation or cosmetic covering.

An abatement professional can inspect the asbestos-containing material and decide which option is safest. Typically, this will depend on the material’s condition and friability.

What Are Friable Asbestos Tiles?

For example, vinyl asbestos floor tiles in good condition are not considered friable. However, if those tiles are scratched, sanded or degraded and crumble over time, they become friable. Asbestos ceiling tiles were generally made of softer material and were considered highly friable.

Only abatement professionals should handle asbestos tile removal. Depending on the condition of the tiles, removal may be the safest option. When done by a qualified professional, removal will completely address the asbestos problem.

An abatement contractor will first inspect the building to determine if asbestos materials are present. Samples will be sent to a lab for asbestos testing to confirm the presence of the mineral. At this time, contractors will be able to provide a cost estimate for the job. Some homeowners prefer to have the inspection and estimate done by one contractor and the job done by another, to ensure fair pricing.

How Much Does It Cost to Remove Asbestos Tiles?*

Removing asbestos floor tiles can cost between $5 – $15 per square foot. Homeowners should also keep in mind the cost of replacing the flooring for a more holistic estimate.

Removing asbestos ceiling tiles can cost between $5 – $15 per square foot. Homeowners should also consider the associated costs of replacing the ceiling tiles.

Asbestos abatement professionals will begin by closing off the area containing asbestos products. They will then wet the materials in the work area to prevent fibers from becoming airborne. After wetting, asbestos materials can be removed.

In the case of asbestos floor tiles, both the tiles and the underlayment may contain asbestos. A thorough abatement job will remove both products.

Removal and disposal of any asbestos materials should always be done by professionals.

If the tiles are in good condition, encapsulation may be an option instead of removal. Encapsulation refers to covering the existing asbestos tiles to prevent fibers from becoming airborne.

Asbestos floor tiles may be covered with carpeting, new tiles or even wood flooring. Encapsulation may also be an option for asbestos ceiling tiles. Workers may add drywall over the tiles to encapsulate them and prevent human contact.

Encapsulation is not always a long-term solution. While intact tiles often do not pose a threat to health, disturbance or degradation can cause the asbestos to become airborne.

What Are the Health Risks of Exposure to Asbestos Tiles?

Damaged or disturbed asbestos tiles can release asbestos fibers into the air. Anyone in the surrounding area may then inhale or ingest the fibers.

The asbestos fibers may settle in the lining of internal organs and cause irritation. Over time, irritation may lead to conditions such as asbestosis, pleural thickening or pleural plaques. In serious instances, aggressive diseases such as mesothelioma may develop.

The only effective way to prevent these conditions is to avoid asbestos exposure.