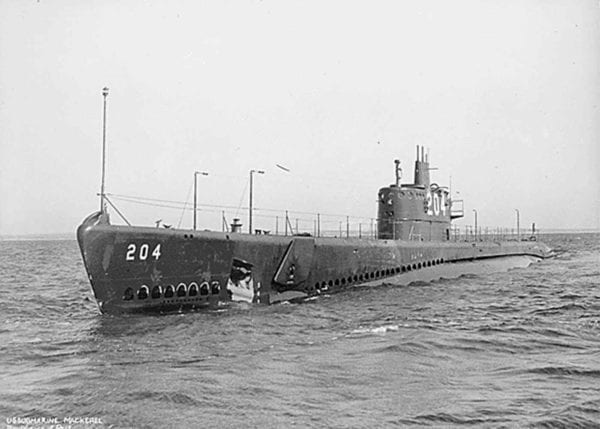 Submarines are Navy ships capable of self-propelling underwater. These vessels have the ability to collect intelligence, identify foreign vessels and attack enemy ships. Submarines are also used to protect cargo ships and other vessels.

The United States Navy began constructing submarines in the early 1900s. Beginning in 1922, the Navy allowed asbestos use in the construction of new submarines. Chrysotile and amosite asbestos were commonly used in submarine gaskets, insulation and packing.

During World War II, asbestos was an important material in ship construction. The mineral is able to withstand high temperatures and chemical corrosion.

Submarine History at a Glance

Submarines continued to be constructed with asbestos until the late 1970s. Years of asbestos use on submarines and in shipyards led to high rates of asbestos disease among Navy veterans. Today, military veterans make up approximately 30% of mesothelioma cases.

Many notable submarines were constructed to support World War II and the Cold War. Before the dangers of asbestos became well known, the mineral was widely used in the shipbuilding industry. The USS Seawolf and the USS Triton were two notable submarines constructed with asbestos products. Navy veterans who served on these vessels may still risk developing asbestosis, lung cancer and/or mesothelioma.

The USS Seawolf (SSN-575) was a nuclear submarine used throughout the Cold War. General Dynamics Electric Boat constructed the submarine in the early 1950s. The company constructed many submarines for the U.S. Navy.

General Dynamics Electric Boat used asbestos-containing products during ship and submarine construction. According to court records, there were asbestos gaskets, pumps and other products aboard the USS Seawolf.

Crew members who came in contact with these products may be at risk of developing an asbestos-related illness. General Dynamics Electric Boat employees and shipbuilders who built and repaired the USS Seawolf may also risk developing an illness from asbestos exposure.

In 1959, the U.S. Navy commissioned the USS Triton (SSR(N)-586) as a radar picket submarine. At the time, it was the largest and most powerful submarine ever built.

It was later reclassified as an attack submarine (SSN-586). The vessel was the first submarine to sail around earth completely submerged.

The USS Triton was also constructed by General Dynamics Electric Boat. It contained a variety of asbestos products, including gaskets, packing and insulation.

One individual testified the ship contained asbestos products manufactured by several companies, including:

Many asbestos products could be found in the engine room of the ship. When gaskets and packing were removed or replaced, asbestos dust was often released into the air. Therefore, crew members aboard the USS Triton were likely exposed to the dangerous mineral.

Before the 1980s, many Navy submarines were constructed with asbestos materials. The shipbuilding industry used asbestos because of the mineral’s durable and heat-resistant qualities. Widespread asbestos use caused exposure among many shipbuilders and crew members.

Individuals who served aboard the submarines may be at risk of developing an asbestos-related illness.

Asbestos Use on Submarines

Navy submarines previously contained a variety of asbestos products. For example, asbestos insulation was used to protect pipes from steam and hot fluids pumped throughout the ships.

Fires on submarines are a concern because there are few ways to escape the vessels. Shipbuilders used asbestos to increase heat resistance and fireproof areas within submarines.

Who Was at Risk of Asbestos Exposure on Submarines?

Asbestos in the body may lead to asbestosis, mesothelioma or another asbestos-related disease.

Trades at risk of asbestos exposure on submarines include:

Because of laws and regulations, asbestos is no longer used in submarine construction. However, veterans and other individuals may still develop an illness. Mesothelioma symptoms may take up to 50 years to present. As a result, many Navy veterans are diagnosed years after initial asbestos exposure.

Compensation for People Exposed on Submarines

After experiencing asbestos exposure, Navy veterans and shipbuilders who develop diseases may seek compensation. Several legal options are available to asbestos victims and their loved ones. To receive compensation, individuals may file:

Attorneys at asbestos law firms can help asbestos victims pursue the most beneficial options. Many lawsuits result in mesothelioma settlements. In some cases, lawsuits may also result in compensation from a jury award.

Navy veterans exposed to asbestos on submarines may also qualify for treatment through the U.S. Department of Veterans Affairs. At VA treatment centers, eligible veterans may receive care from specialized mesothelioma doctors.