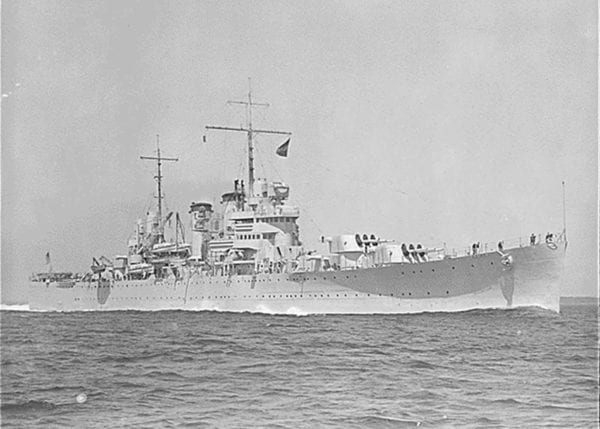 United States Navy cruisers are large warships designed for combat and high speeds. The term cruiser has been used for combat ships since the 17th century. In the 1880s, the cruiser designation was given to a specific type of U.S. warship.

The first cruisers were iron-hulled warships powered by steam. Later versions of the U.S. Navy vessel were armored with steel and equipped with large guns. Until the 1970s, cruisers were also constructed with a variety of asbestos products.

Cruisers’ History at a Glance

Modern cruisers are typically smaller than battleships and larger than destroyers. The ships are used in several types of missions, including air warfare, surface warfare, undersea warfare and naval surface fire support. Guided-missile cruisers are also equipped with Tomahawk cruise missiles. This makes the ships capable of long-range strikes.

Many notable cruisers were constructed at the height of asbestos use. The mineral was useful for shipbuilding because of its durability and fire resistance. Due to widespread use of asbestos, many service members on these U.S. Navy ships were exposed. Research suggests at least 140 cruisers contained asbestos, including the USS Bremerton and the USS Worden.

The USS Bremerton was a heavy cruiser commissioned at the end of World War II. It launched in 1944 after construction by the New York Shipbuilding Corporation. The cruiser spent time in several notable locations in 1945, such as Guantanamo Bay, Cuba, and Pearl Harbor, Oahu, Hawaii. The ship was also later used in the Korean War.

The USS Bremerton operated on steam turbines and had a variety of insulated materials onboard. At the time of the ship’s construction, many turbines, pipes and valves were insulated with asbestos.

In one case, a shipyard worker testified the USS Bremerton contained Kaylo asbestos insulation made by Owens-Illinois, Inc. The block insulation was used on the ship’s boiler and around its pipes.

In 1960, the ship was decommissioned and sent to Long Beach Shipyard. At that time, workers cut, sawed and removed thermal insulation from the ship’s pipes. During these processes, shipyard workers and veterans may have experienced exposure.

The USS Worden was a guided-missile cruiser that participated in the Vietnam War. The ship was constructed by Bath Iron Works, a shipbuilding company. Several asbestos companies supplied products to Bath Iron Works.

The USS Worden was constructed during the height of asbestos use. Individuals testified there were thousands of feet of insulated pipes in the ship.

Asbestos insulation was commonly used to insulate pipes, gaskets and other products. These asbestos-containing materials (ACMs) were often found in boiler rooms and engine rooms on U.S. Navy vessels. Removing or repairing the insulation could result in airborne asbestos fibers. This put anyone onboard the ship at risk of exposure.

Throughout the 20th century, many Navy cruisers were constructed with asbestos materials. As a result, many shipbuilders and crew members experienced asbestos exposure.

The Navy has decommissioned most cruisers built with asbestos. However, Navy veterans and crew members who worked on these ships may still develop mesothelioma or another asbestos-related disease.

Asbestos Use on Cruisers

Before the 1980s, asbestos was widely used on Navy cruisers. Many cruisers ran on steam, which required machinery to withstand high temperatures. Asbestos was often added to naval ships’ machinery because of the mineral’s strong fireproofing qualities.

Many cruisers were built with asbestos pipes, turbines and valves. Asbestos insulation was also used to insulate pipes and other machinery. During installation, repair and maintenance, these materials may have been disturbed.

Other asbestos products that may have been found on cruisers include:

If ACMs are disturbed, fibers may be released into the air. Airborne asbestos put many individuals onboard at risk of exposure.

Who Was at Risk of Asbestos Exposure on Cruisers?

There were approximately 500 crew members on the average cruiser. As a result, thousands of Navy personnel may have experienced asbestos exposure.

Individuals who worked on pipes, boilers and other machinery may have experienced exposure while cutting, sawing or handling these products. Shipbuilders and shipyard workers also experienced occupational exposure while building or repairing cruisers.

Trades that risked asbestos exposure on cruisers and at shipyards include:

Individuals who worked in boiler rooms and other poorly ventilated areas were at particularly high risk. Poor ventilation can lead to high concentrations of asbestos fibers in the air.

If individuals inhale or ingest asbestos dust, fibers may embed in their organs. Over time, asbestos in the body may lead to asbestosis, lung cancer or mesothelioma. On average, these diseases may take up to 50 years to present. Today, Navy veterans and shipyard workers are still at risk of developing mesothelioma cancer.

Compensation for People Exposed on Cruisers

Navy veterans and shipyard workers who develop mesothelioma from asbestos exposure may seek compensation. For example, veterans may be eligible to file a claim with the U.S. Department of Veterans Affairs. By filing a VA claim, eligible veterans may receive compensation and healthcare benefits.

For example, a plaintiff received a jury award after filing a lawsuit against several companies. The companies named in the plaintiff’s case included Garlock Sealing Technologies, Keene Corporation and GAF Corporation.

Due to asbestos exposure, the plaintiff was diagnosed with asbestosis and lung cancer. His exposure originated from his work as a shipfitter at New York Shipyard. From 1939 to 1945, he worked on several Navy light cruisers, including:

The plaintiff spent much of his time on these ships in the boiler and engine rooms. He recalled there were no warnings about exposure or health risks. He stated the “use of asbestos made the air very dusty.”

At the end of the trial, the plaintiff was awarded around $200,000 from Keene Corporation and Garlock Sealing Technologies. Other companies named in the lawsuit settled outside of court.

Compensation from a lawsuit, VA claim or another type of asbestos claim may help veterans pay for treatment and other expenses. Individuals can determine their eligibility by contacting a mesothelioma law firm. At these law firms, mesothelioma lawyers can help asbestos victims pursue the best legal option.