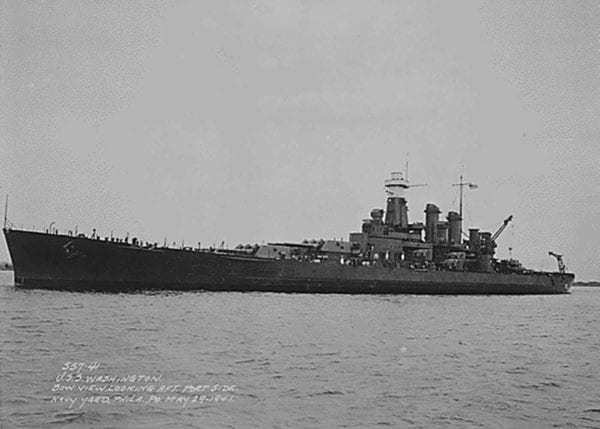 Battleships are large, armored vessels equipped with artillery for war. United States Navy battleships had both defensive and offensive roles during wartime.

U.S. naval battleship construction began with the USS Maine and the USS Texas in the mid- to late 1880s. These ships operated mainly in the Spanish-American War. They are considered part of the pre-Dreadnought era of battleships.

In July 1920, the Navy adopted the formal “BB” ship number format. The majority of battleship-class vessels were constructed between 1888 and 1947. These ships were built at a rate of about one ship per year. Many products aboard Navy vessels included asbestos.

In total, there were 59 battleships constructed for the U.S. Navy. These ships fell under 23 different classes and models. Most battleships were named after U.S. states.

Battleships were used in several wars throughout the first half of the 20th century. By the 1960s, many ships of this class were sold, sunk or otherwise decommissioned. Aircraft carriers and other modern warships replaced battleship-class vessels.

Many Navy veterans who served on these heavily armed warships were exposed to asbestos during their service. Asbestos exposure can lead to serious illnesses, including mesothelioma and lung cancer.

Battleships’ History at a Glance

Battleships were an important part of many conflicts of the 20th century. These Navy ships were equipped with heavy artillery and carried thousands of military personnel. With 23 separate classes, battleships varied greatly in size, speed and armaments. However, most naval ships built before the 1970s contained asbestos components.

The USS Missouri ushered in the last of the battleship era. It was the last battleship to be both commissioned and decommissioned. This ship served in WWII, the Korean War and the Persian Gulf War. Builders constructed the ship at the Brooklyn Navy Yard.

The USS Missouri ushered in the last of the battleship era. It was the last battleship to be both commissioned and decommissioned. This ship served in WWII, the Korean War and the Persian Gulf War. Builders constructed the ship at the Brooklyn Navy Yard.

As an Iowa-class battleship, the USS Missouri carried nearly 465 tons of asbestos-containing thermal insulation, among other asbestos materials. The ship was over 800 feet long and housed hundreds of naval personnel.

She was the site of the 1945 Japanese surrender that ended WWII. Post-war, the ship underwent naval review and served missions in the Atlantic and Mediterranean. When the Korean War began in 1950, the USS Missouri was the only battleship on active duty and was deployed twice.

Between 1955 and 1984, the Navy deactivated the USS Missouri. She served as a tourist attraction at the reserve fleet in Bremerton, Washington. However, she was reactivated and modernized in 1984. After reactivation, the USS Missouri served a combat role in the 1991 Persian Gulf War.

The ship was decommissioned for the last time in March 1992. In June 1998, the USS Missouri was transferred to Hawaii, to rest alongside the USS Arizona memorial at Pearl Harbor.

The USS New Jersey is the most decorated battleship in U.S. history with 19 Battle and Campaign stars. She was an Iowa-class ship, reaching nearly 900 feet long and containing hundreds of tons of asbestos products. The USS New Jersey was built at the Philadelphia Naval Shipyard.

This ship’s wartime service began in early 1944 during the Marshall Islands invasion. Her WWII operations continued into 1945, supporting raids and invasions. She was decommissioned in 1948. Over the next 50 years, the Navy recommissioned and decommissioned the USS New Jersey during several wars and conflicts.

The ship was decommissioned for the last time in 1991 and now resides at a museum in New Jersey.

Battleships were often constructed with asbestos to make them fireproof. Repair or maintenance work on battleships often resulted in airborne asbestos dust. Below is a list of battleships that may have led to asbestos exposure.

Asbestos Use on Battleships

For much of the 20th century, the U.S. Navy required asbestos aboard its ships. Beginning in the 1880s, amosite, chrysotile and crocidolite asbestos fibers were used extensively as insulating materials on naval ships. The Navy used the mineral because of its incombustibility, temperature resistance, light weight and strength.

The Navy then approved the use of amosite asbestos in the mid- to late 1930s. After that time, amosite was required in many applications aboard ships. It became the primary fiber type used aboard naval ships in common asbestos products, such as molded insulation.

Government suppliers received certain specifications for the mineral’s use, including which products should use the mineral and in what amount.

Due to the sheer scale of asbestos use aboard ships, asbestos use in the Navy was measured by tons. For example, Iowa-class battleships reportedly carried nearly 465 long tons of thermal insulation. Many pipes and ventilation ducts on ships were also covered with asbestos insulation.

Naval asbestos use peaked during the shipbuilding and repairing boom associated with WWII. The military did not construct any new battleships after 1947. However, asbestos was still used as ships were deactivated, repaired and reactivated.

As a result, thousands of veterans, officers, shipyard personnel and passengers may have experienced asbestos exposure aboard battleships. Any individuals exposed to asbestos are at risk of developing an asbestos-related disease. However, those exposed to concentrated amounts over a prolonged period are at increased risk. Dangerous illnesses, such as asbestos lung cancer, can develop from asbestos exposure.

By the 1960s, most of the Navy’s battleships had been scrapped, sunk or given to museums. Though inactive for several years, the Iowa-class battleships were the only battleships remaining worldwide. Over the next 40 years, these ships remained in reserve or temporary reactivation. These vessels underwent a $1.7 million modernization effort in the 1980s. Because of the asbestos regulations enacted during the late 1970s, these updates may have included asbestos removal.

All battleships were officially decommissioned by the early 1990s and stricken from naval records in 2006.

Who Was at Risk of Asbestos Exposure on Battleships?

Documents show naval officials were aware of the potential dangers of asbestos. A 1939 memo from a medical officer to the manager of Boston Navy Yard recommended precautions to mitigate these hazards.

In 1941, Ernest Brown, a captain in the Navy Medical Corps, wrote about industrial hygiene in a military publication.

“One of the most important concerns of the Medical Department of the United States Navy today is industrial hygiene, especially in Navy yard practice. There is a potential occupational disease hazard due to inhalation of asbestos dust among workers engaged in the manufacture of asbestos insulating covers for flanges, valves and high-temperature steam turbines.”

As a result of the Navy’s widespread asbestos use, officers, shipbuilders and veterans were frequently exposed to the mineral.

Individuals at risk of occupational exposure on battleships include:

Navy veterans and other professionals may have experienced occupational asbestos exposure from battleships. Asbestos exposure can lead to serious illnesses, including mesothelioma and asbestosis.

Compensation for People Exposed on Battleships

Victims of asbestos exposure aboard battleships may be eligible for compensation. Veterans have several options for compensation, including VA claim benefits and lawsuits.

For example, one veteran filed a VA claim for asbestos exposure aboard the battleships USS New Jersey and USS Missouri. He worked as a hygiene operator, troubleshooting laundry and bath units connected to motor pools. The veteran worked in old buildings with asbestos pipes, which he would clean without a mask. He also asserted he may have been exposed to asbestos while working as an equipment cleaner at Long Beach Naval Shipyard.

Veterans, shipyard workers and others exposed to asbestos on battleships may have other claim options as well. Those wishing to learn more about their compensation options should contact a mesothelioma lawyer.