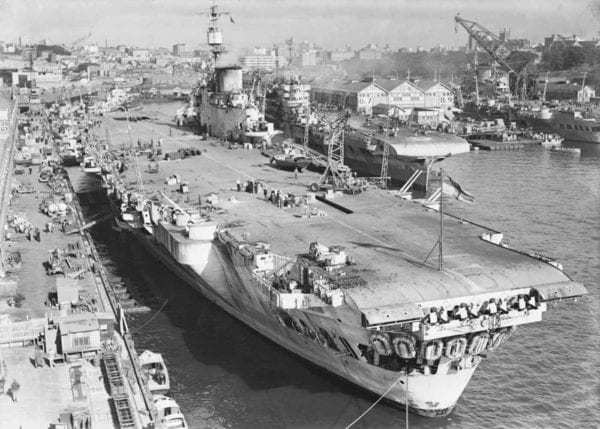 Aircraft carriers are large warships that also serve as aircraft bases. The vessels are equipped with flight decks to allow aircraft to take off and land at sea.

The Navy’s first aircraft carriers were also constructed with a variety of asbestos-containing products. Due to the mineral’s durability and heat resistance, asbestos was a popular material in Navy ships. Asbestos was commonly used to fireproof and insulate steam pipes, turbines and valves.

Aircraft Carriers’ History at a Glance

Many notable aircraft carriers were constructed with asbestos products. The mineral was valuable for its ability to withstand high heat and pressure.

Until the late 1970s, asbestos was commonly used by the U.S. Navy to insulate pipes, turbines and other materials. For example, two aircraft carriers built with these asbestos-containing materials (ACMs) were the USS Kitty Hawk and the USS Independence.

The USS Kitty Hawk was an aircraft carrier constructed by the New York Shipbuilding Corporation. The vessel first saw combat during the Vietnam War and supported the American presence in Vietnam until 1966.

According to court records, the USS Kitty Hawk contained asbestos insulation, turbines and valves. Asbestos products on the ship were manufactured by several companies, including:

Documents also show the Navy had specifications to add asbestos insulation to General Electric steam turbines in the ship. As a result, Navy personnel on board were exposed to asbestos dust. Several individuals who worked on the ship later developed mesothelioma.

The USS Independence was constructed at Brooklyn Navy Yard during the height of asbestos use. Court documents show the vessel contained asbestos packing and valves.

At the time, asbestos was the principal insulating material for the U.S. Navy’s high-pressure steam valves. In the 1940s, the Navy began documenting the connection between asbestos exposure and a number of illnesses. Despite knowing asbestos was dangerous, the Navy continued to put individuals on the USS Independence at risk of developing an asbestos-related disease.

Navy veterans, shipbuilders and crew members who served on aircraft carriers may have come in contact with ACMs.

Asbestos is no longer used by the U.S. Navy today. However, individuals who served on Navy aircraft carriers may still risk developing an asbestos illness. Mesothelioma may take up to 50 years to present. Individuals may develop symptoms many years after initial exposure.

Below is a list of aircraft carriers that may have caused exposure.

Asbestos Use on Aircraft Carriers

Until the late 1970s, many aircraft carriers were constructed with ACMs. Asbestos was commonly used to fireproof pipes that carried steam and hot liquids. During maintenance and repair of these products, asbestos fibers were often released into the air.

Asbestos was also commonly added to parts in jets, airplanes and helicopters. Individuals who serviced aircraft may have come in contact with asbestos-containing brakes and other automotive parts. As a result, service members were put at risk of asbestos exposure.

Who Was at Risk of Asbestos Exposure on Aircraft Carriers?

Many individuals have experienced occupational asbestos exposure on aircraft carriers. Navy personnel and shipyard workers were at risk of exposure while cutting, sawing and handling asbestos products. During these processes, asbestos was often released into the air.

Trades that risked asbestos exposure on aircraft carriers and at shipyards include:

Individuals who worked in boiler and engine rooms were at an increased risk of exposure. Poor ventilation and tight working conditions led to a high concentration of airborne asbestos fibers.

Asbestos in the air put nearby workers at risk of inhaling or ingesting the mineral. Exposure to asbestos fibers caused many workers to develop illnesses such as mesothelioma, lung cancer and asbestosis.

Many Navy veterans and shipyard workers have developed asbestos illnesses from exposure on aircraft carriers. These individuals may seek compensation from companies responsible for their exposure.

After developing mesothelioma, a pipefitter filed a lawsuit against Owens-Corning Fiberglas Corporation and several other asbestos companies.

For years, the man worked as a pipe coverer and pipefitter at Newport News Shipbuilding and Drydock Company. The man spent time insulating pipes and valves on the aircraft carrier USS America. He also installed and removed pipes aboard several submarines. During these jobs, he experienced asbestos exposure.

The man died from mesothelioma before the end of the trial. The jury awarded his widow approximately $1 million. This included $409,017 in compensatory damages and $100,000 in punitive damages against Owens-Corning Fiberglas Corporation.

Individuals and their loved ones should contact a mesothelioma law firm to learn more about their legal options. In addition to lawsuits, victims may be eligible for other types of compensation. Mesothelioma lawyers understand state legal deadlines and may help their clients gather evidence needed to file a claim or lawsuit.