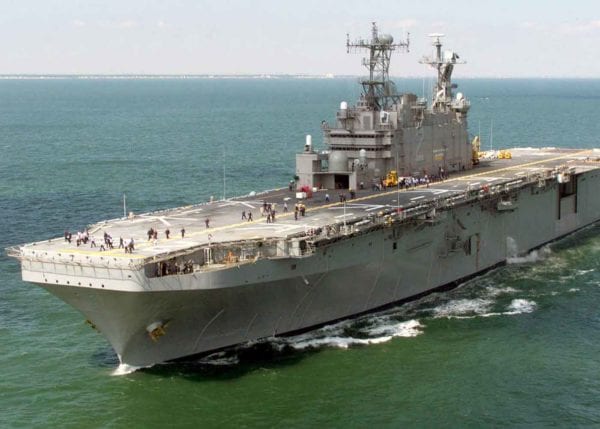 Amphibious warships are used to launch land attacks from sea. There are two main classifications of amphibious assault vessels:

The United States Navy and Marine Corps used amphibious warships frequently in World War II (WWII) and other wars throughout the 20th century. Amphibious warships should not be confused with landing ships, which dock directly ashore.

A total of 388 amphibious attack transport ships served in WWII. The Navy divided these ships into several different classes. The ships typically carried the APA (troop transports) or AKA (cargo transport) hull designations.

Many of these ships were originally constructed as merchant ships or freighters and were retrofitted as amphibious warships. At the time of their construction, the Navy required asbestos use in its ships.

One of the most notable uses of amphibious warships was during the D-Day invasion of Normandy. These ships helped transport troops and landing equipment to the battle zone. They were also used across the Pacific for island-hopping campaigns. Some of these ships later served in Korea and Vietnam.

Further differentiation emerged as the military designed new classes. However, the asbestos-containing amphibious warships began to fall out of favor around the late 1960s. By 1969, only a few of the original amphibious warships remained in service.

The last of these ships were decommissioned or sold abroad around 1980. The Navy discontinued asbestos use around the same time.

Amphibious Warships’ History at a Glance

As a result, many individuals aboard amphibious warships may have been exposed to the mineral. Anyone exposed to asbestos risks developing a related illness, such as mesothelioma cancer or lung cancer.

The USS Queens was a Windsor-class amphibious attack transport. She was constructed in 1942 by Bethlehem Steel Company, a known user of asbestos. Asbestos companies also provided the ship’s propulsion systems, including two Babcock & Wilcox steam turbines.

In 1944, the Navy commissioned the USS Queens to serve in WWII. She was assigned to the Asiatic-Pacific Theater and served two years in this arena. In 1946, the ship was decommissioned and given to the National Defense Reserve Fleet.

Just two years later, civilian passenger company American Export Lines purchased USS Queens and renamed her SS Excambion. She provided service between New York City and the Mediterranean from 1948 to 1959. After her civilian service, the company returned the USS Queens to the National Defense Reserve Fleet.

In 1960, the Texas Maritime Academy loaned the ship and rechristened her as the USTS Texas Clipper. For three decades, she served as a training ship for sea cadets and a dormitory for Seaborne Conservation Corps members.

In 2006, the ex-USS Queens was transferred to Texas Parks & Wildlife for use as an artificial reef. To prepare for her new life, crews removed all toxic materials still aboard the vessel. This included 1,680 cubic yards of asbestos. She was sunk in 2007.

The life of the USS Queens demonstrates how many people may unwittingly come into contact with asbestos. Throughout her life, the USS Queens may have exposed veterans, crew members, civilian passengers, cadets and demolition workers.

The USS Cavalier was a Bayfield-class amphibious warship. The Navy classified her as an attack transport vessel under the APA hull designation in 1943. Her outfit included machinery and products manufactured by asbestos companies, including:

These products may have included asbestos when installed on the USS Cavalier.

The USS Cavalier served several campaigns in the Asia-Pacific and Far East regions during her short life. She was also involved in the Korean War and Vietnam War. At several points during these campaigns, the USS Cavalier returned to the Mare Island Naval Shipyard in Vallejo, California, for repairs.

Western Asbestos Company products were used during the USS Cavalier’s repairs in 1950, 1951, 1952, 1954 and 1957. As a result, the USS Cavalier is one of hundreds of ships on the company’s trust fund list as a potential asbestos exposure site.

Hundreds of Navy and Marine Corps ships built in the 20th century contained asbestos. As a result, construction, battle, repair and maintenance may have disturbed asbestos fibers aboard these ships. Veterans and other service members may have been exposed to the mineral during these activities.

Below is a list of amphibious warships where service members may have experienced asbestos exposure.

Asbestos Use on Amphibious Warships

For many years, the Navy required all contracted shipyards to build their vessels with asbestos components. The mineral was considered standard use at the time because of its durability, chemical resistance and heat resistance. In particular, asbestos’ resistance to high temperatures and flammability made it a popular choice for warships.

Hull designations and classes of amphibious vessels with known use of asbestos include:

Who Was at Risk of Asbestos Exposure on Amphibious Warships?

Individuals who may have experienced asbestos exposure aboard amphibious warships include:

Exposure can lead to serious asbestos-related diseases, including mesothelioma and asbestosis.

Veterans and other individuals who worked around amphibious warships may have been exposed to asbestos. These workers may be eligible for compensation for resulting asbestos diseases.

There are several avenues for compensation, including:

Asbestos trust fund claims are available to individuals who were exposed to asbestos materials manufactured, installed, serviced or repaired by an asbestos company with a trust fund. These trust funds were often set up during bankruptcy proceedings to protect money for future asbestos claims.

The trust was initially funded with $2 billion. Individuals who believe they may have been exposed to asbestos in products manufactured by any of the participating companies should contact a law firm. An experienced mesothelioma attorney can help confirm eligibility and handle the claim filing process.

Filing for compensation can help veterans and other asbestos victims get the compensation they deserve. It can also help victims and their families pay for medical expenses, cover lost wages and punish responsible parties. Mesothelioma patients and their loved ones should contact a mesothelioma lawyer to determine their compensation options.