The World Trade Center and Asbestos 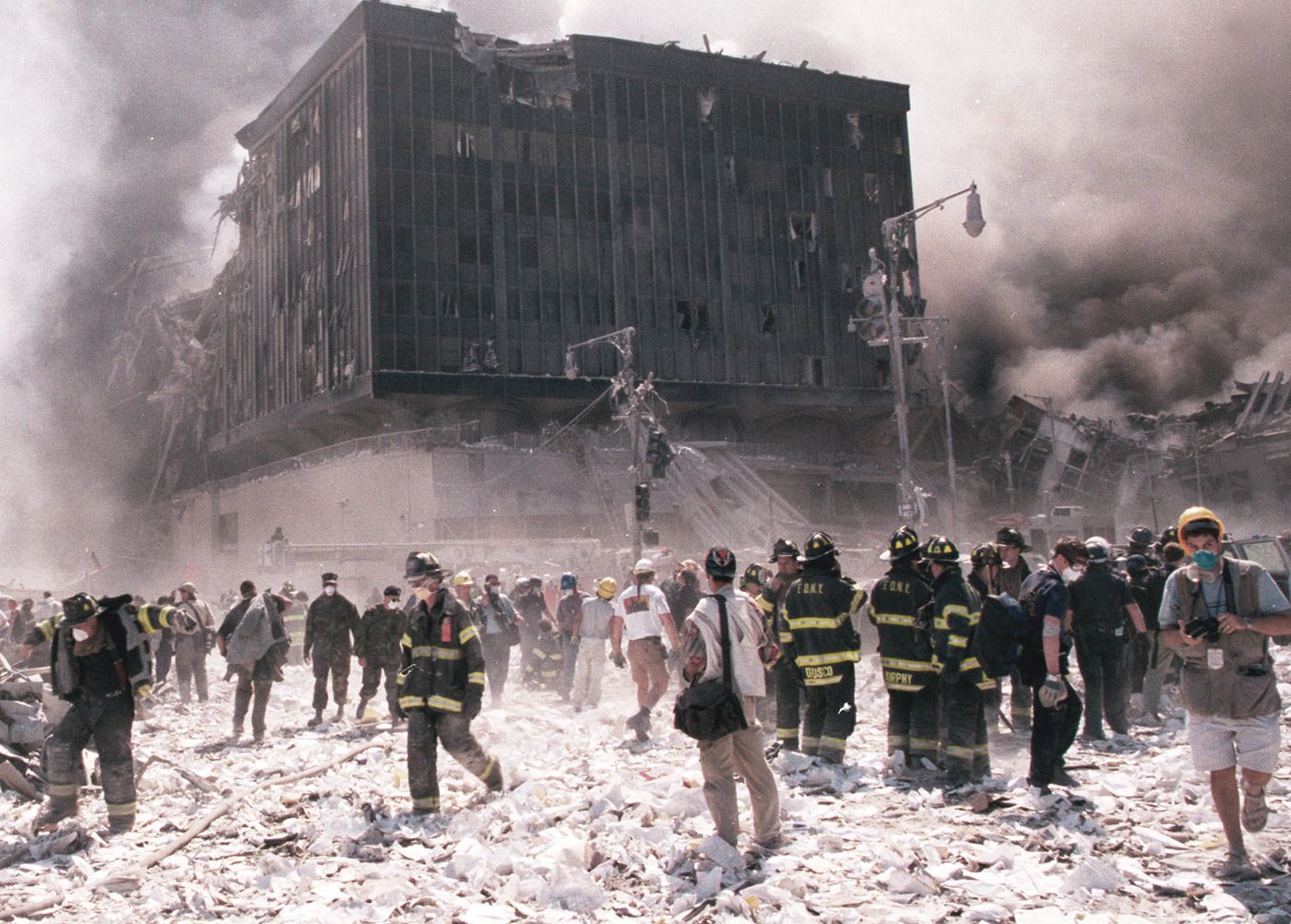 Was There Asbestos in the World Trade Center?

Early construction of the twin towers used asbestos. Contractors used asbestos materials in the lower floors of the north tower, before the dangers of asbestos exposure became widely recognized in the early 1970s.

As a result, the Department ordered contractors to stop asbestos use in the World Trade Center. The upper levels of the north tower and the entirety of the south tower contained asbestos alternatives.

Why Was There Asbestos in the Twin Towers?

Asbestos was mainly used in the twin towers for insulation. Asbestos-containing cement, flooring and foam board were also used. The mineral added strength and fire resistance to the towers’ infrastructure.

Contractors sprayed insulation on steel beams in the lower levels of the north tower. The steel framework held up the towers, supporting elevator shafts and stairwells.

How Much Asbestos Was in the World Trade Center?

The north tower contained an estimated 300 – 400 tons of asbestos. The twin towers also contained many other contaminants. In total, the towers were constructed with 424,000 tons of concrete and 485,000 tons of other materials.

Was Asbestos Removed From the World Trade Center?

The Port Authority of New York and New Jersey established regulations for asbestos use and abatement in 1971. Early asbestos abatement estimates from the World Trade Center totaled close to $1 billion.

In the mid-1980s, the Port Authority began an abatement program to remove asbestos from the World Trade Center. Removal was difficult and expensive because asbestos was in the buildings’ framework.

Limited information is available about asbestos abatement from the twin towers. Some reports state the program removed some of the asbestos. However, testing of 9/11 dust and rubble confirms the mineral was still present. Asbestos exposure in New York may have led workers and residents to develop an asbestos disease.

The Twin Towers and Asbestos Exposure

During the attack, concrete and other materials in the twin towers were destroyed. This released a toxic dust cloud containing thousands of contaminants, including the carcinogen asbestos.

*What Was in the World Trade Center Dust Cloud?

*Based on samples gathered by the Environmental Protection Agency (EPA)

Asbestos-containing dust from the attack on the twin towers spread across Lower Manhattan. As a result, thousands of first responders, residents and workers experienced asbestos exposure. Individuals in the area were also exposed to several other carcinogens.

Low levels of dust were found as far as the Empire State Building, almost three miles away. The exact distance remains unclear. Individuals have shared varied reports of small amounts of debris across the city. 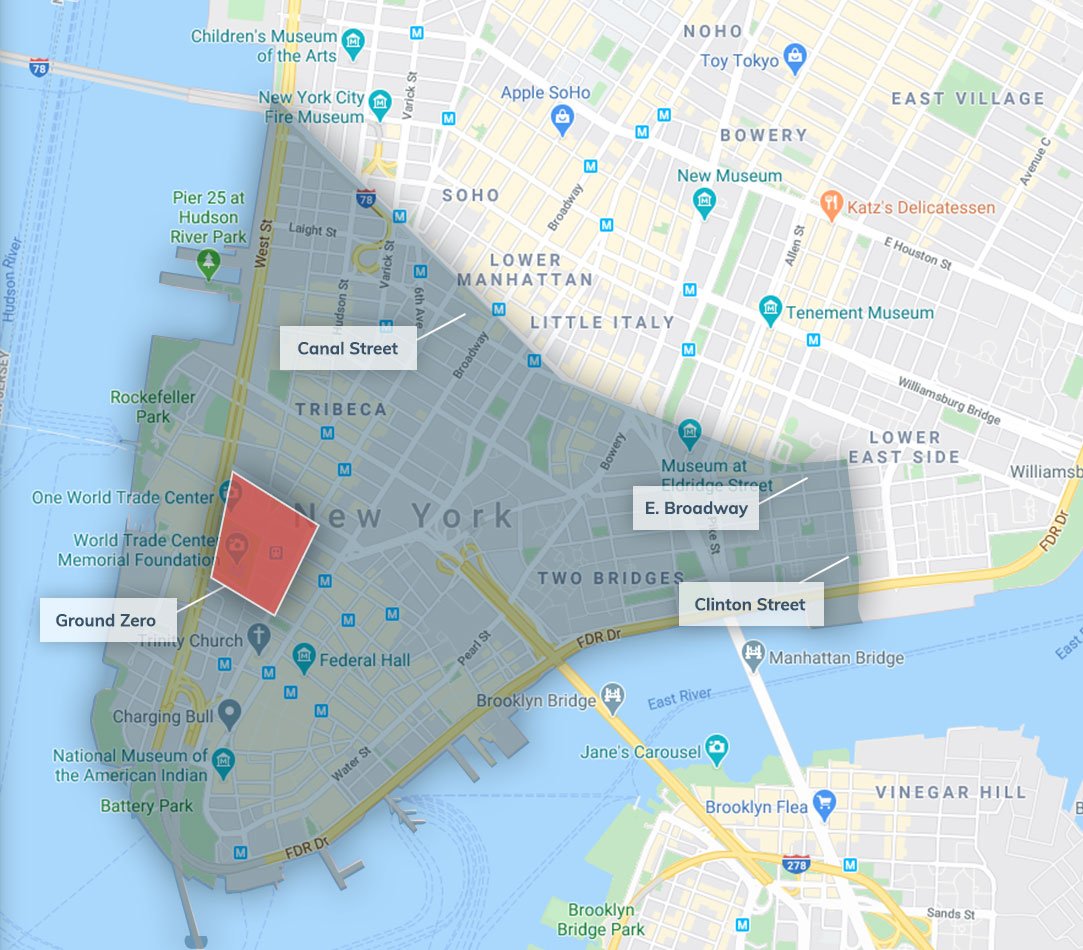 Those in close and distant proximity to the attacks faced potential asbestos exposure.

Who Was At Risk of 9/11 Asbestos Exposure?

The EPA’s Response to 9/11 and Asbestos

Days after the attacks, the Environmental Protection Agency (EPA) stated the Manhattan air was “safe to breathe.” However, the EPA later concluded it did not have the data to back this claim. The agency tested the air and settled dust to determine if asbestos fibers and other particles were present.

Once deemed asbestos-containing, the material is then subject to EPA and NESHAP regulations. Bulk dust and ambient air samples were collected from September 11 to September 18, 2001. More than 25% of the samples contained levels of asbestos higher than 1%.

In addition to the immediate risks of 9/11, there were concerns about asbestos dust. Dust entered HVAC systems of nearby schools, buildings and residences. Thick layers of dust coated indoor areas and filled ventilation systems.

Public health officials have stated that more than 90,000 individuals experienced harmful exposure from the attack. Every time a piece of rubble was disturbed, small clouds of dust and ash became airborne.

Many individuals in the area were not wearing personal protective equipment (PPE). Lack of protection caused many individuals to experience exposure.

As a result of time spent at Ground Zero, many victims have been diagnosed with 9/11-related illnesses and cancers.

Some conditions take years to develop, such as many asbestos-related diseases. As a result, some victims are only just beginning to experience symptoms of asbestos exposure.

The 9/11 rescue workers spent many hours at the heart of Ground Zero, breathing in carcinogens from the dust. The lack of PPE led to an increased risk of inhaling harmful materials.

The rising number of diagnoses led to the creation of the World Trade Center Health Program (WTC Health Program). As of December 2020, 80,146 first responders enrolled in the program to receive treatment for a 9/11-related illness. Enrollees include:

Malignant mesothelioma is a 9/11 cancer of particular concern due to the high levels of asbestos released during the attack. Asbestos exposure is the only known cause of mesothelioma.

Manhattan residents impacted by the attacks are also at risk of developing mesothelioma. Higher quantities of asbestos and long-term exposure may increase mesothelioma risk.

Individuals exposed to asbestos cannot eliminate their risk of developing mesothelioma. However, they may take safety measures to improve early detection.

Victims of exposure should:

The WTC Health Program was set up to help those suffering from 9/11-related conditions. The World Trade Center Health Program offers specialized services to 9/11 victims. Support services include:

There are four member types eligible to enroll in the program:

The WTC Health Program is administered by the National Institute for Occupational Health and Safety (NIOSH). NIOSH is part of the Centers for Disease Control and Prevention (CDC). The WTC Health Program has many Clinical Centers of Excellence throughout New York City. Some centers are specific to responders and survivors.

Victims can apply through the World Trade Center Health Program website. The program covers a variety of illnesses and asbestos-related diseases. Coverage includes all types of mesothelioma.

This research provides an understanding of 9/11 impacts and the need for support services.

Treatment for conditions such as malignant mesothelioma can be costly. Victims may be able to receive compensation to cover medical bills and other fees associated with their diagnoses.

Victims filing a claim could not sue airlines or other parties related to the 9/11 attacks. The fund ran from 2001 to 2004. Around $7 billion was paid out to more than 5,000 families. Families who suffered a loss of a loved one and individuals injured during the attack received compensation.

Continuation of the VCF and WTC Health Program

Victims and family members may have the right to file a claim. Claims require certain documentation and deadlines. Individuals should seek help as soon as possible.