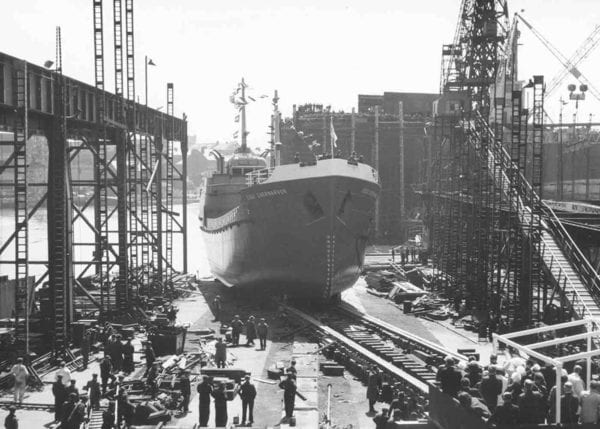 The first United States naval station established on the Pacific Coast, Mare Island Naval Shipyard sat on Mare Island in Vallejo, California. The island is located about 25 miles northeast of San Francisco. The shipyard was in operation from 1854 to 1996.

The U.S. purchased Mare Island in 1853 and construction for the Navy Yard began in 1854. The shipyard accomplished a lot of “firsts” for the U.S. Navy. These accomplishments included the first permanently constructed drydock on the west coast, the first aircraft landing deck on a ship, the first electrically driven and the first oil-operated ships in the U.S. Navy. The shipyard also built the largest ship on the west coast at that time.

Mare Island Shipyard was one of the most important ship repair facilities for the Pacific Fleet during WWII. At the height of the war, the shipyard employed more than 46,000 civilian and military personnel. In 1954, the first nuclear-powered submarine was built on the west coast at Mare Island and 17 more were built at the shipyard through 1970. For the rest of its 26 years, the shipyard repaired, dry docked and overhauled nuclear submarines.

The shipyard was closed in 1996 as part of the Base Closure and Realignment process. The City of Vallejo along with private developers have developed industrial, educational, recreational, residential and historical areas on Mare Island.

Many workers at Mare Island Naval Shipyard were potentially exposed to asbestos. Workers’ loved ones may have also experienced secondhand exposure. As a result, many people developed asbestos-related diseases, such as asbestosis, asbestos lung cancer, and pleural and peritoneal mesothelioma. People who developed an asbestos-related disease may be eligible for compensation.

Active for almost 150 years and a key player in several major wars, Mare Island Naval Shipyard built and repaired several notable ships. These ships include the USS Ward and USS San Francisco, both of which fought in WWII.

Asbestos was used in shipbuilding and repair for several decades when Mare Island Naval Shipyard was in operation. This would have put tens of thousands of shipyard workers and crewmembers who spent time on these vessels at risk of developing mesothelioma.

On December 7, 1941, she was patrolling off the entrance to Pearl Harbor when she encountered, attacked and sank a Japanese Midget Submarine, marking the first U.S. shots fired and the country’s entry into WWII in the Pacific. In 1943, she was converted to a high-speed transport and was sent for war service again in the Pacific.

On December 7, 1944, Japanese aircraft, along with a suicide bomber, attacked the USS Ward, damaging her to the point of abandoning ship. She was sunk by gunfire by USS O’Brien, commanded by Commander William W. Outerbridge. He had commanded USS Ward during the attack on Pearl Harbor three years prior.

During WWII, asbestos would have been used in the conversion and repairs of Navy ships. The workers who recommissioned and converted USS Ward and the crewmen who served upon her during the war would be at risk of developing mesothelioma and other asbestos-related diseases.

The cruiser, USS San Francisco, was laid down in 1931 at Mare Island Naval Shipyard. The cruiser and her crew became one of the most decorated warships of WWII earning 17 Battle Stars, Presidential Unit Citation, four Medals of Honor, 21 Silver Stars and 32 Navy Crosses.

The USS San Francisco was built and operated during the height of asbestos use. Any Navy personnel who may have worked on her or served aboard her would be at risk of developing an asbestos-related disease like mesothelioma.

Asbestos is a durable mineral that is highly resistant to heat. Due to these properties, shipbuilders often used asbestos during the construction process. Products containing asbestos helped control the release of heat and were fire resistant. Such products were desirable on ships.

Mare Island Naval Shipyard actively operated from 1854 – 1996. Asbestos was commonly used during much of this time. Asbestos was used throughout Mare Island Shipyard. The dangerous mineral was often present in boilers, incinerators, insulating materials and other elements of ships. This put those in various shipyard occupations at risk of developing asbestos-related diseases.

It was common for members of the U.S. military and civilians to provide labor in shipyards and on ships. Asbestos was used in most shipyards and aboard most Navy vessels from the 1930s to the 1980s. This likely exposure puts Navy veterans at an increased risk of malignant mesothelioma cancer.

People who constructed or maintained battleships, cruisers, destroyers and submarines during this time were likely exposed to asbestos. These people often worked in space-constrained and poorly ventilated areas, which possibly allowed more asbestos fibers to remain in the areas. For example, enginemen and machinists faced asbestos exposure.

Shipyard workers, veterans and visitors of Mare Island Naval Shipyard are at risk of developing mesothelioma, asbestos cancer or another asbestos illness. Those diagnosed have several claim options to receive financial compensation.

Some companies that wrongfully exposed workers to asbestos are still viable. In other words, they have not filed for bankruptcy. This means individuals can file lawsuits against such companies, which may result in an asbestos settlement.

For example, Aurora Pump Company supplied diesel pumps that contained asbestos to power U.S. navy boats and drydocks in the 1940s, putting many people at risk of developing asbestos-related diseases such as mesothelioma.

Another viable company, H.B. Fuller has been around since 1887 and supplied adhesives manufactured with asbestos to the Navy which have been used on Naval ship equipment and systems. People who worked with these products were wrongfully exposed to asbestos. Several victims have filed successful lawsuits against these asbestos companies.

A U.S. Navy machinist was exposed to asbestos-containing products during various ship overhauls at Mare Island Naval Shipyard over a period of more than eight years. He also worked in the vicinity of various tradesmen who cut and replaced a variety of asbestos-containing products. Their work with these products created dust, which the machinist inhaled.

The following companies provided asbestos products to Mare Island Naval Shipyard. After facing many asbestos lawsuits and exposing innocent people to asbestos, these companies filed for bankruptcy and created trusts to pay victims. If an individual worked at Mare Island Naval Shipyard and developed a disease such as mesothelioma, they may be able to file a claim against these companies’ trusts.