Millions of individuals have served the United States as members of the armed forces. Throughout the decades, these individuals have faced numerous hazards during their service, including exposure to toxic asbestos. Tens of thousands of veterans who worked with asbestos while in the United States Armed Forces have been diagnosed with some sort of asbestos-related disease, including asbestosis and mesothelioma, the latter a particularly difficult-to-fight asbestos cancer that affects the lining of the lungs (pleural mesothelioma), abdomen (peritoneal mesothelioma), or heart (pericardial mesothelioma). Some studies show that as many as 30 percent of all Americans with mesothelioma cancer are veterans who were exposed while on active duty.

Asbestos was utilized by every branch of the U.S. military in one way or another. Lauded for its incredible heat- and fire-resistant properties, asbestos was considered the best insulator available for decades. Aboard navy ships and planes, and with other military equipment that often involved heat and high temperatures, asbestos was the material of choice as the best means to avoid potential disasters, such as fires. While the engine and boiler rooms of ships were prime locations for asbestos use, this toxic substance was not limited to these areas. Asbestos could also be found in other locations, including sleeping quarters and the mess hall.

Asbestos covered pipes, it lined brakes and gaskets, and could be found in cements that were used for a variety of purposes. Veterans and civilian employees who worked in shipyards and aboard ships may have encountered toxic asbestos while serving as plumbers, electricians, welders, insulators, boilermakers, pipefitters, and more. Most worked without benefit of protective gear, making it easy to inhale hazardous asbestos dust, which would eventually scar the lungs and cause tumors that would – decades later – develop into mesothelioma.

The use of asbestos was especially rampant from the 1930s through the 1970s, when shipbuilding was at its peak. And even though its use ended in the late 1970s, the military continued employing asbestos for specific purposes, allowing exposure to continue. Today, because mesothelioma can remain latent for several decades, some Korean and Vietnam Conflict veterans are still being diagnosed with the disease and the number of victims could continue to rise.

Veterans who’ve suffered asbestos exposure are in a unique situation. The U.S. Department of Asbestos Affairs does recognize mesothelioma as a service-related medical condition, and while vets are not permitted to seek compensation directly from the U.S. government, they can request benefits from the Veterans’ Administration if they are able to prove that their disease is asbestos-related and occurred during their military service.

Veterans with mesothelioma can also seek compensation from asbestos manufacturers (again, under the same guidelines) and, hopefully, gain some funds to assist with medical expenses, loss of income, or to secure the future of their survivors. In addition, other resources for veterans suffering from asbestos exposure have been formed by those who are facing similar challenges with asbestos-related diseases, including former military members and their families. 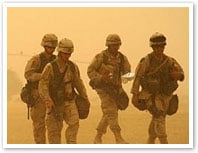 The brave men and women serving their country in Iraq are presented with a number of occupational hazards: the threat of enemy attack, uncomfortable living conditions, extreme heat and weather circumstances, and more.

Few people, however, are aware of another occupational danger faced by United States troops the threat of exposure to asbestos. Because this issue is not necessarily made public, it is safe to assume that no immediate action has been taken to limit exposure to this potentially harmful substance.

Asbestos in the Middle East

According to documents dating back to 2003, approximately $194,000 (USD) worth of chrysotile asbestos (also known as “white asbestos”) was imported to Iraq. Unlike Egypt and Saudi Arabia, its Middle Eastern neighbors, Iraq has not placed any sort of ban on asbestos use, and not one Middle Eastern country has ratified International Labour Organization Law Number 162, which was instituted at the 1986 Asbestos Convention. The ILO No. 162 outlines health and safety procedures related to asbestos, including regulations for employers put forth in an effort to protect the safety of all workers. Because ILO No. 162 is not in effect in Iraq, there are essentially no laws protecting workers and other individuals including U.S. military personnel from the adverse effects of asbestos exposure. It is known that exposure to asbestos can increase the risk of lung cancer, mesothelioma, as well as other cancers.

Our nation’s troops certainly have ample concerns, and worrying about potential asbestos exposure should not be one of them. Asbestos materials may be present in a number of locations in Iraq, including military housing and other structures used by military personnel, and if U.S. troops are unaware that these buildings contain asbestos, they cannot take the appropriate measures to protect themselves from exposure.

Asbestos in older buildings is only harmful if inhaled or ingested. If asbestos-laden structures are damaged, asbestos fibers can become airborne, putting individuals present at risk of inhalation. Those exposed may not experience symptoms of asbestos disease for decades, which often makes it difficult to pinpoint when and where the individual was actually exposed.

In a place of war, asbestos-laden buildings are often destroyed using explosives, which puts U.S. troops and other individuals at risk of inhaling airborne asbestos fibers and dust. In addition, troops may be exposed to asbestos brake pads in older vehicles, or even while searching or conducting missions in Iraqi homes and commercial buildings, many of which have been abandoned and are now crumbling and in need of serious repair.

In an effort to maintain the health and safety of U.S. military personnel in Iraq, appropriate safety gear goggles and masks, for example should be distributed to troops and worn whenever they are in areas where asbestos exposure may occur. In addition, troops should be screened for respiratory disease upon returning to the United States, and close monitoring of their respiratory health should continue every few years.