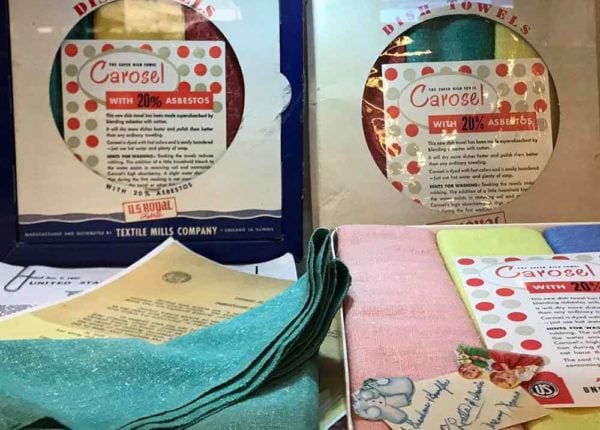 01. Asbestos Use in Textiles

Why Was Asbestos Used in Textiles?

In the United States, asbestos fibers were commonly used to make cloth, fabric and other textiles. The mineral was popular because of its strength and heat-resistant characteristics.

Chrysotile was one of the most common types of asbestos used in textiles. The fibrous nature of chrysotile asbestos made it easy to spin or weave into fabric.

Asbestos Textiles History at a Glance

In the 1980s, the Environmental Protection Agency (EPA) created laws to restrict the manufacturing of asbestos textiles. By 1990, asbestos clothing could no longer be manufactured, imported or distributed in the U.S.

Although asbestos textiles have been discontinued, some products may still be present at homes and jobsites. Individuals may still risk asbestos exposure from these textile products.

Dangers of Asbestos in Textiles

Asbestos use in textile products put many individuals at risk of exposure. When asbestos cloth is cut or handled, friable asbestos may be released into the air. If inhaled, asbestos in the air may lead to illnesses, such as mesothelioma.

Textile mill workers were at a particularly high risk of asbestos exposure. Several studies have linked high rates of asbestos disease to work in textile mills.

In another study, researchers studied the morbidity of workers at an asbestos textile, friction and packing plant. The study group consisted of 2,775 men and 554 women. By studying the group’s death certificates, researchers found:

The data shows death rates from asbestosis, lung cancer and mesothelioma were higher for the plant workers than the general population.

A variety of textile products were once made with asbestos fibers. The list below contains expandable product listings. Click on the product type to see brand names and specific products.

Today, asbestos companies that manufactured textile products face many asbestos lawsuits. These negligent companies often did not warn employees or consumers about the health effects of exposure.

Who Is at Risk of Asbestos Exposure From Textiles?

Textile mill workers were the most at risk of asbestos exposure during the manufacturing process. Conditions in textile mills were dusty and not well ventilated. These conditions can increase the likelihood of ingesting or inhaling airborne asbestos fibers.

In some cases, workers in the textile industry handled raw asbestos and wove it into cloth. As a result, many workers developed asbestos-related illnesses.

Occupations at Risk of Exposure From Asbestos Textiles

Family members of workers were also vulnerable to secondhand asbestos exposure. Loved ones may have experienced exposure from asbestos brought home in hair or clothing. For example, those who laundered asbestos-ridden clothing were often exposed to asbestos dust.

Family members who develop an asbestos illness from secondary exposure may file a mesothelioma lawsuit.

A mesothelioma lawyer can help asbestos victims and their loved ones determine which option to pursue. Successful mesothelioma claims can result in a settlement or jury award. Compensation from a successful claim may cover expenses related to a mesothelioma diagnosis.

In 2001, retired mason and repairman died from pleural mesothelioma. During his career, the man was exposed to a variety of asbestos products, including joint compounds, gaskets and asbestos cloth.

From 1966 to 1971, the man primarily worked as a boiler repairman on ships. To prevent burns, he used asbestos cloth, blankets and gloves. The former repairman commonly worked in poorly ventilated engine rooms with airborne asbestos.

After his death, the man’s wife and daughter filed a wrongful death lawsuit against several asbestos companies. The jury awarded the family $250,000 for economic damages and $15 million in non-economic damages.