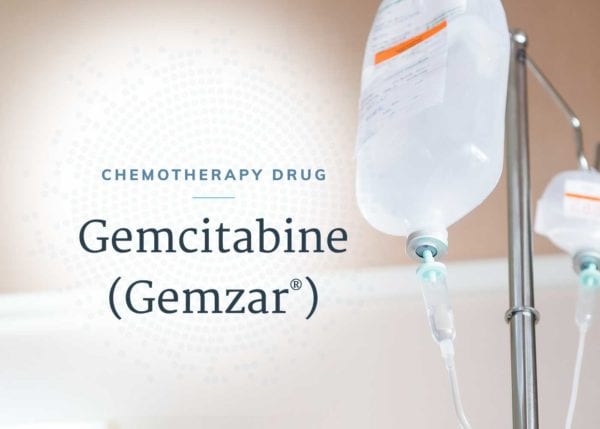 How Gemcitabine Is Used to Treat Mesothelioma

Gemcitabine helps kill mesothelioma cells by interfering with the DNA and RNA the cancer cells use to replicate themselves. Because of this interference, they are unable to reproduce and eventually go through a death process called apoptosis.

Patients are given gemcitabine through an IV. For patients undergoing first-line treatment using gemcitabine and cisplatin, cycles generally last 3 – 4 weeks, with both drugs given on the first day. In most cases, gemcitabine is given two more times during the cycle, but a doctor can determine whether or not the dosage needs to change based on the patient’s overall health and how the mesothelioma reacts to the chemo drugs.

Similar to other chemotherapy drugs applied intravenously, gemcitabine is unable to distinguish healthy cells from the cancerous mesothelioma cells. This results in healthy cells getting damaged, leading to possible side effects in patients. These cells are usually healthy enough to repair themselves once the treatment is over, and those side effects will often dissipate.

Possible Side Effects of Gemcitabine

Like all other chemotherapy drugs, gemcitabine presents with a variety of side effects that vary depending on the patient, the stage of the disease, dosing and many other factors. Common side effects associated with gemcitabine include fever, nausea, fatigue, no appetite, lowering of blood counts and skin rashes. Other side effects may be more serious and should be brought up to the patient’s oncologist or healthcare team immediately.

A mesothelioma doctor will perform blood tests throughout the treatment process to monitor platelet counts, along with white and red blood cell counts. This is because gemcitabine, like many cancer drugs, will impact bone marrow cell production. If the body has too few white blood cells, it makes it easier for infections to develop. Platelets help the blood clot, and when counts are too low it may result in increased bleeding or bruising. Mesothelioma patients are encouraged to avoid over-the-counter medications like ibuprofen or aspirin because they can unintentionally increase their risk of bleeding.

A doctor can determine what medications may react with a mesothelioma patient’s chemotherapy drugs to prevent adverse drug interactions and other health problems from developing.

When used in combination with cisplatin as part of a heated intraoperative chemotherapy (HIOC), gemcitabine proved to be helpful in a phase 1 malignant pleural mesothelioma clinical trial. According to previous studies, mesothelioma patients receiving a combination of gemcitabine and cisplatin saw partial response rates between 16 – 33% and were able to tolerate the toxicity of the treatment. Researchers also noted about 60% of the participants achieved stable disease, meaning there was no additional tumor growth or spreading, and were able to improve their symptoms and pulmonary function. Studies like these are helping lay the groundwork to determine the efficacy of such treatments for mesothelioma patients.

In a phase 2 clinical trial published in 2017, researchers noticed that patients who were treated with a combination of gemcitabine (delivered over six hours) and cisplatin survived nearly as long as those who received the standard of care treatment of cisplatin and pemetrexed. The group receiving gemcitabine/cisplatin had an overall survival of 18.6 months, but had an objective response rate of 50%, meaning the treatment was effective. In comparison, researchers noted patients in the trial treated with the combination of cisplatin and pemetrexed survived 20.6 months, on average. As a result, the combination of cisplatin and gemcitabine given in low doses over a longer time period could serve as a second-line treatment for patients who saw no improvement with the standard of care.

Overall, researchers continue working to determine the best treatment combinations with gemcitabine to improve efficacy as a first- or second-line treatment for mesothelioma patients. Ongoing clinical trials are testing the chemotherapy drug with various forms of immunotherapy, as well as with other chemotherapy drugs like vinorelbine.