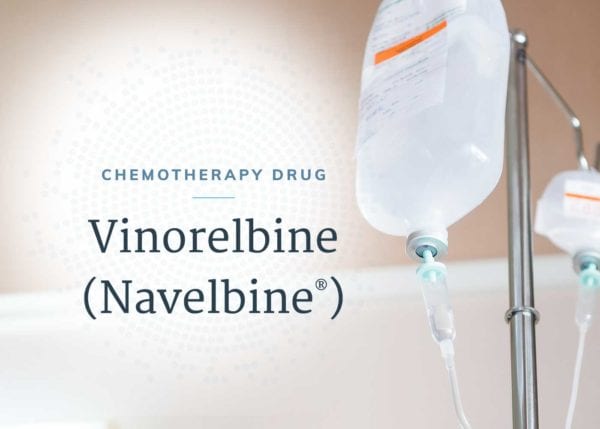 How Vinorelbine Is Used to Treat Mesothelioma

In cancer patients, including those diagnosed with mesothelioma, vinorelbine is given through an IV. This process happens once a week, though the number of treatments can vary depending on several factors, including toxicity levels, overall patient health and how the tumors react to the treatment being given.

When a mesothelioma patient is given vinorelbine, the drug works to inhibit cancer cell division. Although researchers are still trying to fully understand how the drug is able to cause cancer cell death (apoptosis), there is a belief that vinorelbine activates some proteins while inactivating others, which eventually leads to cell death.

Vinorelbine has been used for patients with mesothelioma as part of a first-line chemotherapy treatment combination with a platinum-based chemotherapy drug like cisplatin, but it hasn’t proven to be more effective than the current standard of care of pemetrexed and cisplatin. Additionally, some studies have suggested that although it is capable of generating a high rate of stable disease in patients who were previously treated with other chemotherapy drugs, there isn’t a clear change to overall patient survival using this treatment.

Possible Side Effects of Vinorelbine

Because vinorelbine is a chemotherapy drug, it carries many of the same side effects as other cancer drugs used to treat malignant mesothelioma. Additionally, there is a threat of the drug leaking out of the injection site, causing irritation and possible damage to the tissue in that area. The patient’s healthcare team will monitor the injection site for any problems associated with leakage or an allergic reaction, including swelling, itching, blistering or other sores.

Patients receiving vinorelbine may experience common side effects stemming from treatment, including nausea and vomiting, fatigue, sore throat, weight loss, mouth sores, constipation, hearing problems, headaches, hair loss and tingling in the hands or feet (peripheral neuropathy). Vinorelbine also affects white and red blood cell counts, along with platelet numbers. In cases where red blood cell counts become too low, a blood transfusion may be needed. Some patients may also experience other serious side effects when given vinorelbine.

The patient’s healthcare team will perform ongoing blood tests and other monitoring to look for any changes that may be symptoms of a larger, more threatening issue. If a serious side effect does occur, the oncologist may change dosing, delay cancer treatments or stop them altogether. Most side effects will clear up over time once the drug is no longer administered.

In 2009, researchers published a phase 2 open study testing the efficacy of vinorelbine as second-line therapy for patients with recurrent malignant pleural mesothelioma. Of the 63 patients who received the drug, there was a response rate of 16% and overall survival of 9.6 months. As a result, the researchers concluded the chemotherapy drug could be a potential option as a treatment for mesothelioma, though further study would be needed.

Another study from 2014 tested vinorelbine as a second- or third-line therapy in mesothelioma patients who experienced metastasis after receiving the standard of care treatment of cisplatin and pemetrexed. In this study, 59 patients were given vinorelbine as a second-line treatment, achieving an overall disease control rate of 49.1%, including partial response in 15.2% of those patients. These patients also saw an overall survival of 6.2 months, with 2.3 months of progression-free survival. Researchers noted the vinorelbine treatment was moderately active, but further study would be necessary to better determine its efficacy for mesothelioma.

Another study recently tested the efficacy of several second-line treatments, including vinorelbine, in patients with malignant pleural mesothelioma. All of the patients were previously treated with a first-line therapy, with the majority receiving pemetrexed and cisplatin. The results showed that patients given vinorelbine had progression-free survival of 2.7 months, which was lower than platinum doublet therapy (4.9 months), gemcitabine (3 months), immunotherapy (3 months) and targeted agents (3 months). Overall, more research is needed to find a treatment or treatment combination that is capable of producing more positive results as a second-line mesothelioma therapy.