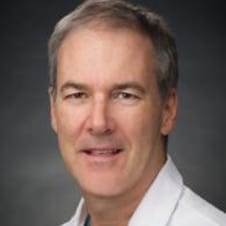 In 1996 Dr. Vallieres came to the United States to work as an Associate Professor of Surgery at the University of Washington School of Medicine in Seattle. In 1998, he was recognized as the Department of Surgery’s “Teacher of the Year.” After spending eight years at the University of Washington, Dr. Vallieres was appointed Surgical Director at the Swedish Cancer Institute in 2004.

While his specialty focuses on general thoracic surgery, Dr. Vallieres is interested in developing improved treatments for various conditions including pleural diseases and mesothelioma. He is considered an authority and advocate for multimodality therapy for lung cancer patients. Dr. Vallieres has been involved in various clinical trials, including acting as the surgical principal investigator for the Southwest Oncology Group 9900 Intergroup phase III trial that evaluates the role of pre-operative chemotherapy for the management of early stage resectable NSCLC.

As a scholarly author, he has published over 150 articles and abstracts including, articles in scientific and peer-reviewed journals like the Journal of Clinical Oncology.