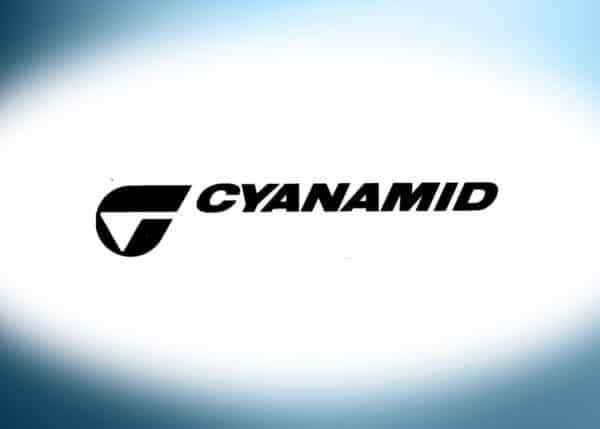 American Cyanamid Company was founded in 1907 by Frank Washburn, a civil engineer. The company first focused on its namesake, cyanamid, which was an important aspect of fertilizer. Within the next few years, the company worked to expand its offerings and began dabbling in other types of industries, including industrial and specialty chemicals and pharmaceuticals. By the late 1920s, the company grew very quickly and acquired 30 subsidiaries.

However, as time went on, the company faced ups and downs financially, as demand for certain products diminished and the world faced the trials of the Great Depression and various wars. These hardships led to changes in their strategic vision and the development of diversified product offerings, which eventually began to utilize harmful toxins in production. With the expansion of their chemical market, by the 1950s, the company saw sales of more than $300 million and continued to grow into other markets like consumer goods.

Throughout this time and beyond, American Cyanamid relied on a number of toxins that put their thousands of employees at risk of dangerous exposure. With such an array of products, the company used asbestos and other carcinogens in their plants and products. By the 1970s, employees began to speak out about the decline in their health, as well as the poor environmental practices adopted by the company. In 1973, for instance, the Georgia State Water Quality Control Board pressed the organization to stop throwing toxic waste, including sulfur acid, into the Wilmington and Savannah rivers, which was harming the ecosystem and killing fish.

They wanted to bring attention to the harmful work conditions. According to reports, the plant manager replied simply, “We don’t run a spa.”

The company’s harmful workplace and environmental practices eventually led to thousands of lawsuits, despite continued growth in sales. In 1983, the company’s location in Bridgewater Township, New Jersey, was even added to the EPA’s list of Superfund sites because of the extensive contamination.

By the 1980s, the company ceased use of asbestos. However, workers still faced the potential of coming into contact with dangerous chemicals. In the early 1990s, the company began downsizing and splitting into separate businesses, but continues to face legal recourse today from its past wrongdoings.

American Cyanamid Company rapidly expanded their product offerings and turned to asbestos because it was a cheap and accessible way to add durability and fire resistance. As a result, employees of the company, as well as workers in numerous industries and the general public, faced toxic asbestos exposure and the risk of developing diseases like mesothelioma.

Some of the most commonly used asbestos products from American Cyanamid include:

The company also worked with many other well-known asbestos manufacturers for creation of their own products and to fulfill a need in production operations. These companies included Porter Hayden, GAF, Armstrong, Celotex, Johns Manville, Raybestos Manhattan and Owens Corning Fiberglas. American Cyanamid utilized a variety of asbestos products from these companies, such as brake linings, ceiling and floor tiles, gaskets and insulation.

As American Cyanamid Company grew and continued to complete acquisitions, the number of employees quickly grew by the thousands. Some reports estimate the company exploded to about 100,000 employees across the globe by the 1970s, all of whom faced potential exposure to carcinogens on the job. In addition to putting their own employees at risk, the company impacted a number of industries who utilized their products in their day-to-day tasks.

Have a Question About Asbestos Exposure and American Cyanamid Company?

After employees began to speak up about the health effects of working for American Cyanamid, the company began to face thousands of asbestos lawsuits for wrongful exposure.

One such lawsuit was brought forward by Kenneth Zimko and his wife. Kenneth developed mesothelioma as a result of secondary exposure at home. His father worked for American Cyanamid’s chemical plant in Bound Brook, New Jersey. Kenneth described his father’s role with the company as extremely varied, including working as a millwright, machinist, mechanic and boiler house supervisor. As all of the duties within these job titles entailed working in a high-heat area, it’s likely that Kenneth’s father was exposed to asbestos frequently and for long periods of time.

Kenneth unfortunately passed away from mesothelioma during the trial, but the jury awarded his wife $3.5 million in damages. American Cyanamid received 50% fault with another company, Tate & Lyle. Both companies appealed, and the jury reversed the fault in the case of Tate & Lyle. However, American Cyanamid was still found liable for Kenneth’s exposure, and the verdict was upheld.