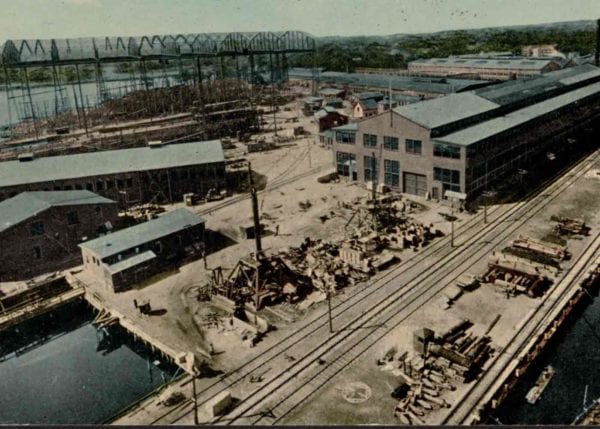 General Dynamics bought Fore River Shipyard in 1964 and built naval support vessels, civilian merchant ships and nuclear submarines. That work was eventually moved over to its sister shipyard, Electric Boat in Connecticut. In 1980, with an oversaturation of shipyards in the U.S., Fore River Shipyard closed.

Fore River Shipyard produced hundreds of ships over its lifetime. Ships were built for the military and commercial clients. Two notable ships that were built for the U.S. Navy were the submarine tender, USS Lawrence Y. Spear, and the aircraft carrier, USS Hancock.

The submarine tender USS Lawrence Y. Spear was laid down at Fore River Shipyard in 1996. Throughout her history, USS Lawrence Y. Spear received many awards and accolades, but she is most famous for being one of the first ships to have women assigned as crew members. This historic event first took place in October 1978. In 1980, she was also the first ship to initiate women as Shellbacks as they crossed the equator.

USS Lawrence Y. Spear provided support for the Iran hostage crisis in 1980 and Operation Desert Storm in 1991. One of her last missions before being decommissioned in 1996 was support for the recovery and salvage of TWA Flight 800.

USS Lawrence Y. Spear was built and active during a time when it was common for asbestos to be used in shipbuilding and repair. Anyone working or serving on the ship may be at risk of developing asbestos-related diseases such as mesothelioma.

USS Hancock was an aircraft carrier laid down at Fore River Shipyard in 1943. She fought against Japan in WWII in 1944 and 1945. She was involved in numerous attacks causing massive destruction to enemy territory. During these attacks, she was hit by several suicide planes causing multiple fires on board, as well as many causalities.

In 1946, she was decommissioned and entered the reserve fleet at Puget Sound Naval Shipyard.

For her entire lifespan, many materials used to build, repair and modernize the USS Hancock contained asbestos. This asbestos put her workers and crew members at risk of developing mesothelioma.

Asbestos Use at Fore River Shipyard

Asbestos is a durable mineral that is highly resistant to heat. Due to these properties, shipbuilders often used asbestos during the construction process. Products containing asbestos helped control the release of heat and were fire-resistant. Such products were desirable on ships.

Fore River Shipyard actively operated from 1883 to 1980. Asbestos was commonly used during many of these decades. Asbestos was used throughout Fore River Shipyard. The dangerous mineral was often present in boilers, incinerators, insulating materials and other elements of ships. This put those in various shipyard occupations at risk of developing asbestos-related diseases.

Maintenance workers on warships, steamers, aircraft carriers, submarine tenders and other ships faced the same risks. Poor ventilation on ships combined with pervasive asbestos use made exposure common. For example, plumbers and pipefitters were exposed through the normal duties of their jobs.

Workers who installed and repaired pipes and plumbing were at risk of asbestos exposure. The dangerous mineral was often used to insulate plumbing fixtures throughout ships. Any time the material was disturbed, workers faced a risk of inhaling asbestos fibers.

Asbestos use all but stopped before the 1980s. However, people can still be exposed at shipyards when working on ships maintained or built pre-1980. Various shipyard duties, including sanding or sawing pipes for installation, exposed workers to asbestos.

Shipyard workers, veterans and visitors of Fore River Shipyard are at risk of developing mesothelioma, asbestos cancer or another asbestos illness. Those diagnosed have several claim options to receive financial compensation.

For example, Westinghouse Electric Corporation, which purchased the television network CBS Inc. in 1995, became the leading supplier of reactors for U.S. submarines in the 1940s. The company also made radar and other electrical systems used in submarines. Asbestos was likely used in the creation of these products, putting Navy service members at risk of asbestos-related diseases.

IMO Industries (formerly IMO DeLaval) has a long history of producing turbines, compressors, pumps and motion control equipment. Many of their products contained asbestos and were prevalent at Fore River Shipyard. Asbestos exposure from these products put people at risk of developing mesothelioma.

Some of these victims have filed successful lawsuits against the companies.

A 53-year-old former steamfitter spent eight years at Fore River Shipyard. He worked throughout the base but mainly in the power plants. The power plants produced high-pressure steam. During summer, boilers would undergo maintenance and overhaul, if needed. This maintenance included stripping and reapplication of the boilers’ asbestos insulation for repair and replacing asbestos gasket material. This work created large quantities of asbestos dust that the steamfitter breathed in.

Many Navy and civilian personnel were exposed to asbestos through their work in shipyards. These individuals used a variety of asbestos products. If a shipyard worker developed an asbestos-related disease, that person can file a claim with that product manufacturer’s trust.

The following companies provided asbestos products to Fore River Shipyard. After facing many asbestos lawsuits and exposing innocent people to asbestos, these companies filed for bankruptcy and created trusts to pay victims. If an individual worked at Fore River Shipyard and developed a disease such as mesothelioma, they may be able to file a claim against these companies’ trusts.