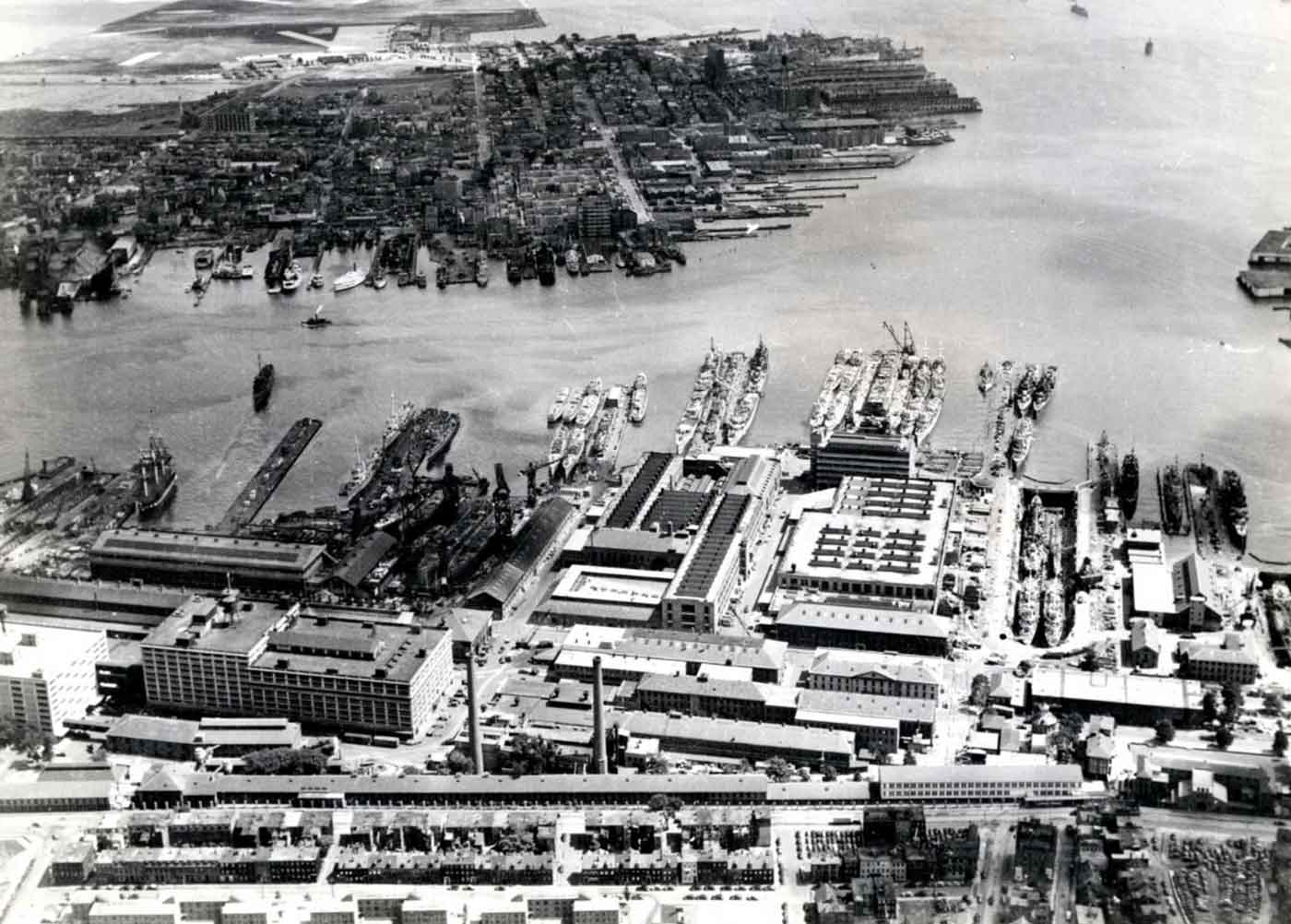 Located at the meeting of the Charles River and Mystic River in Boston Harbor, this shipyard was established in 1800 and was an important wartime asset until it was retired in 1974.

As one of the earliest naval shipbuilding facilities, the Navy Yard was an innovator in shipyard technology and played an important part in the progress and effectiveness of the U.S. Navy. The men and women employed at the Charlestown Navy Yard built more than 200 warships, maintained and repaired thousands of others and proved their worth in each of the nation’s wars throughout its 174-year history. At its peak production during WWII, the shipyard employed 50,000 workers.

The Navy Yard is now home to the USS Constitution, a commissioned vessel in the U.S. Navy and the oldest warship still afloat worldwide. It is also home to the USS Cassin, a Fletcher-class destroyer built in 1943. While the Navy Yard has transitioned from an active military site into a National Park, the Navy is still present, with active-duty naval personnel stationed on the USS Constitution, as well as a skilled civilian maintenance workforce for the ship.

There is also a portion of the Navy Yard that is not included as part of the Boston National Historical Park that encompasses the twelve-acre Charlestown Naval Shipyard Park.

Shipyard workers built and repaired many noteworthy ships at Boston Navy Yard. Workers built more than 200 ships and repaired thousands of other vessels during the yard’s 174-year history. Many of these ships served important roles in wartime efforts, including World War I and World War II.

Asbestos was often used in shipbuilding materials during this time period. As a result, many of the ships built and repaired at Boston Navy Yard contained asbestos products.

The USS Constitution is the oldest commissioned ship afloat in the United States Navy. The ship is still in operation today as a historic site with naval officers and crew still serving aboard her. While she had sailed years before and participated in the war against Tripoli pirates, her greatest service was in the War of 1812. During this war, her crew defeated four British frigates and she earned the nickname “Old Ironsides” because the cannon fire from enemy ships seemed as if they couldn’t penetrate her strong oak hull.

In 1830 the USS Constitution was deemed as unseaworthy, but due to public interest, the ship was preserved and rebuilt. In 1844, she began a circumnavigation of the globe and then was removed from active service in 1882. In 1905, she was opened to the public in Boston Harbor. In the early 1930s, the ship called at 90 American ports and was visited by 4.5 million people. Since 1934 the ship has been based at the Boston Navy Yard, sailing only two other times for celebrations in 1997 and 2012. During the 1930s, asbestos was used in boilers putting crew members who were on this tour and running the historic site at risk of asbestos exposure and, in turn, at risk of developing mesothelioma.

The USS Cassin Young is a Fletcher-class destroyer built in 1943 in San Pedro, California. She served at a time when asbestos was used often in pipe coverings, gaskets, lagging and boilers. This put many crew members at risk of asbestos exposure and developing asbestos-related diseases including mesothelioma.

The USS Cassin Young is now docked at the Boston Navy Yard and open seasonally to visitors for guided tours offered by the National Park Service. She engaged in seven Pacific battles in WWII, even surviving two Kamikaze hits. During her WWII service, she also rescued 120 men from the carrier Princeton when it sunk in October 1944. After serving in the war, the USS Cassin Young was repaired, decommissioned on May 28, 1946, and placed in the reserve fleet.

USS Cassin Young was recommissioned on September 7, 1951 to serve in the Korean War and in 1952 she underwent a major overhaul at the Boston Navy Yard. In 1954, as part of an around-the-world cruise, the ship carried out patrols in Korean waters. From 1955-1959, Cassin Young performed routine duties in Atlantic and Caribbean waters with four Mediterranean deployments. During those years, the ship returned to the Boston Naval Shipyard five more times for overhauls. On April 29, 1960, Cassin Young was again decommissioned and mothballed at Norfolk Naval Shipyard, Virginia.

Asbestos Use at Boston Navy Yard

Boston Navy Yard was in operation from 1800 to 1974. Asbestos use was common during this timeframe. The dangerous mineral was often present in items such as boilers, incinerators, insulating materials and other elements of ships. This means people who worked in shipyards have a high risk of asbestos exposure and of developing asbestos-related diseases.

It was common for members of the U.S. military and civilians to provide labor in shipyards and on ships. Asbestos was used in most shipyards and aboard most Navy vessels from the 1930s to the 1980s. This likely exposure puts Navy veterans at an increased risk of mesothelioma.

People who constructed or maintained warships, submarines, cruisers, destroyers, sloop of wars, steam-screw frigates, monitors and torpedo boats during this time were likely exposed to asbestos. These people often worked in space-constrained and poorly ventilated areas, which possibly allowed more asbestos fibers to remain in the areas. For example, enginemen and machinists faced asbestos exposure.

Anyone who was onsite at Boston Navy Yard and came in contact with asbestos products is at risk of developing asbestos diseases such as mesothelioma. These individuals have many options for compensation.

Asbestos product manufacturers are responsible for exposing people to asbestos. The legal status of these companies can affect what compensation is available to victims. Mesothelioma lawyers can help victims determine if a lawsuit, settlement, VA claim and/or trust fund claim (or a combination of these) is the best compensation option.

Some asbestos product manufacturers remain in business today. This means these companies have not filed for bankruptcy and victims can file lawsuits against the company. Lawsuits may result in compensation through verdicts or mesothelioma settlements.

For example, people were wrongfully exposed to asbestos at Boston Navy Shipyard because of products supplied from Foster Wheeler. Products included boilers, steam generators and other power equipment. The company has had many lawsuits filed against it and been found liable for asbestos-related damages.

Crane Company is another viable company that made asbestos-containing products used in shipbuilding at Boston Navy Shipyard. These products included mechanical gaskets and valves which would have been used by tradesmen, including pipefitters.

Victims have filed successful lawsuits against both of these companies.

A U.S. Navy machinist mate and striker fireman spent four years at Boston Navy Yard working on both the USS Norris and USS Dashiell while the ships were being overhauled. He testified to exposure to asbestos-containing pipe covering and gaskets which he cut and replaced creating asbestos dust that he breathed in. He also replaced lagging and valve packing that contained asbestos. While a fireman he was exposed to large quantities of asbestos dust during boiler overhaul.

Many Navy and civilian personnel were exposed to asbestos through their work in shipyards. These individuals used a variety of asbestos products. If a shipyard worker developed an asbestos-related disease, that person can file a claim with that product manufacturer’s trust.

The following companies provided asbestos products to Boston Navy Yard. After facing many asbestos lawsuits and exposing innocent people to asbestos, these companies filed for bankruptcy and created trusts to pay victims. If an individual worked at Boston Navy Yard and developed a disease such as mesothelioma, they may be able to file a claim against these companies’ trusts.