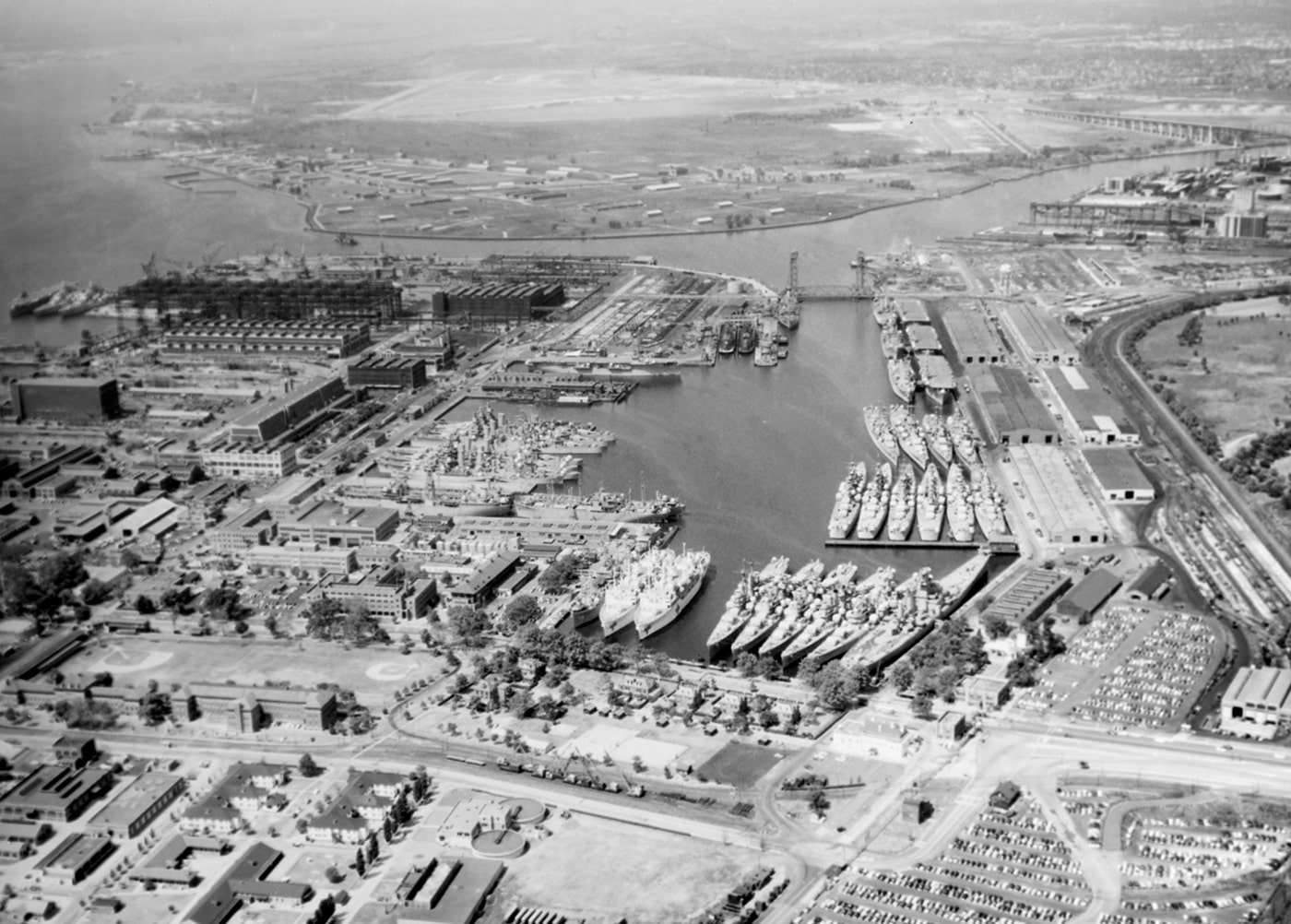 The Philadelphia Naval Shipyard was the first naval shipyard in the United States. The original site of the shipyard was located on Federal Street along the Delaware River, but due to expansion needs, the facility was eventually moved to League Island. The Philadelphia Naval Shipyard rapidly transformed into a major production facility, and the first Naval ship, the USS Henderson, was commissioned in 1917. During World War II, 40,000 employees worked at the shipyard where they built 53 ships and conducted repairs, conversions and overhauls of 1,218 other vessels. Throughout the 20th century, the Philadelphia Naval Shipyard actively completed repairs, constructions and conversions, developed new materials and methods and built special equipment for Navy ships.

The site’s role as a U.S. Navy facility ended on September 30, 1995. Soon after, the west end of the site became a commercial shipyard, currently called the Philly Shipyard (formerly known as Aker Philadelphia Shipyard). The Navy still maintains a presence at the location, especially via the Naval Surface Warfare Center Ship Systems Engineering Station, and the Naval Inactive Ship Maintenance Facility (NIMSF), which continues to store decommissioned and mothballed ships.

Many workers at Philadelphia Naval Shipyard were potentially exposed to asbestos. Workers’ loved ones may have also experienced secondhand exposure. As a result, many people developed asbestos-related diseases, such as asbestosis, asbestos lung cancer, and pleural and peritoneal mesothelioma. People who developed an asbestos-related disease may be eligible for compensation.

As one of the longest, operating shipyards in the country, the Philadelphia Naval Shipyard built and repaired many noteworthy ships. It operated from 1801 to 1995 as a military shipyard, actively building and repairing over 1,000 ships during that time period.

Ships built and repaired at the shipyard traveled all over the world. Many of these ships also contained a wide variety of asbestos-containing products and materials.

The USS John F. Kennedy was ordered in 1964 and it entered service in 1968. At the time of its construction, asbestos was used heavily in fireproofing materials. This put many workers and crew members at risk of asbestos exposure for years. Exposure to products like this has been a known cause of mesothelioma.

The ship made eight deployments to the Mediterranean Sea, as well as a deployment in support of Operation Desert Shield. The USS John F. Kennedy spent two years at the Philadelphia Naval Shipyard for repairs. After repairs, JFK participated in Operation Southern Watch followed by Operation Enduring Freedom in response to the 9/11 attacks. In 2004, she was retired.

Construction of the USS Blue Ridge began in 1967 and was completed in 1970. At the time of its construction, asbestos was commonly used in products made for pipe insulation, which put the people constructing this ship and crew members at risk of asbestos-related diseases such as mesothelioma.

The USS Blue Ridge was the last new ship built in the Philadelphia Naval Shipyard. The ship served in San Diego and Yokosuka, Japan. During Operations Desert Shield and Desert Storm, Blue Ridge served as flagship for Commander, United States Naval Forces Central Command from 1990 through 1991. The USS Blue Ridge is still in operation today.

Asbestos Use at Philadelphia Naval Shipyard

Those who helped maintain or repair warships, submarines, destroyers and cruisers also faced these risks. The heavy use of the dangerous mineral, along with poor ventilation on ships, led to frequent asbestos exposure. For example, insulators were exposed through installation and maintenance work.

People who worked on ships at Philadelphia Naval Shipyard are at risk of developing asbestos-related diseases. After a diagnosis, these shipyard workers have compensation options.

Victims can be compensated by the companies that exposed them to asbestos. Their compensation options depend on the status of that company. Victims can work with a mesothelioma lawyer to secure payment from a lawsuit, settlement, trust fund and/or VA claim (or a combination of these types of claims).

Some companies that produced asbestos products are still viable. This means the company hasn’t filed for bankruptcy. Thus, individuals can file lawsuits against that company. These lawsuits could end in verdicts or settlements.

IMO Industries (formerly IMO DeLaval) has a long history of producing turbines, compressors, pumps and motion control equipment. Many of their products contained asbestos and were prevalent at Philadelphia Naval Shipyard. Armstrong International is another company that was responsible for exposing Philadelphia Naval Shipyard workers to asbestos through work on their steam products. Both of these companies have been found liable for damages in many mesothelioma lawsuits.

A United States Navy crewmember serving aboard the USS Saratoga (CV-60) spent one year at the Philadelphia Naval Shipyard during an extensive ship overhaul working as a painter and chipper. His duties brought him into close contact with other tradesmen who used asbestos-containing products, including civilian insulators, laggers, pipefitters, boiler workers, electricians, machinists and welders, exposing him to asbestos dust on a daily basis.

The following companies provided asbestos products to Philadelphia Naval Shipyard. After facing many asbestos lawsuits and exposing innocent people to asbestos, these companies filed for bankruptcy and created trusts to pay victims. If an individual worked at Philadelphia Naval Shipyard and developed a disease such as mesothelioma, they may be able to file a claim against these companies’ trusts.