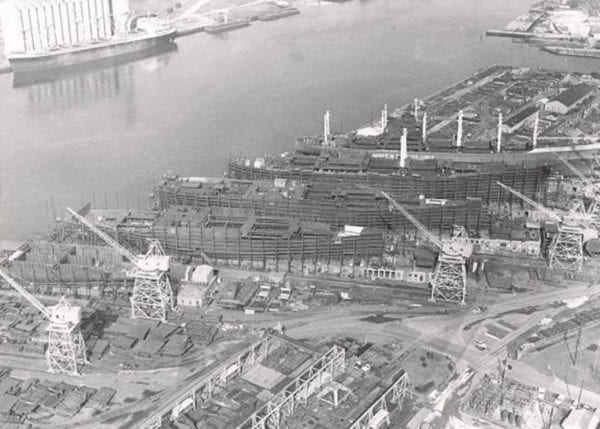 Located in Pascagoula, Mississippi along the Pascagoula River, Ingalls Shipyard was established in 1938 and still operates today.

Ingalls Shipbuilding was established in 1938 by Ingalls Iron Works of Birmingham, Alabama. At the time, the company wanted to build a new shipyard to serve a growing market for cargo and passenger ships. With the onset of World War II (WWII), the shipyard switched over from commercial work to aid in ship production for the U.S. military. During the war, the shipyard built more than 60 ships. Many of those ships returned to Ingalls after the war to be converted into cargo ships.

After WWII, Ingalls focused on both the commercial sector and the military which proved wise as the Cold War was beginning. In the 1950s the shipyard began constructing submarines. In 1961, Litton Industries, Inc. purchased the shipyard.

Litton’s plan for the new facility was to utilize “inverted modular” construction techniques in which entire sections of the ship would be built and then assembled and installed on land prior to completing the hull. This model eventually took off and between 1975 and 1980 Ingalls delivered 60% of all the ships supplied to the U.S. Navy and its workforce peaked at 25,000.

Ingalls Shipyard still operates today and is the largest manufacturing employer in Mississippi and a major contributor to the economic growth of both Mississippi and Alabama.

As a prolific supplier of ships to the U.S. military, Ingalls Shipbuilding constructed several notable vessels. Among these are the USS Parche and the SS Exchequer/USS Pocomoke. These ships were built during a time when asbestos materials were popular, posing an exposure threat to crew and shipyard workers.

The USS Parche was a hunter/killer nuclear submarine constructed at Ingalls Shipyard beginning in 1970. It was commissioned in 1974 and served for two years in the Atlantic Fleet in its originally intended role.

In 1976, the USS Parche was moved to the Pacific Fleet and modified to support the National Underwater Reconnaissance Office – a highly secretive joint partnership between the Central Intelligence Agency and the Navy.

The submarine became a ghost-like spy submarine, outfitted with monitoring gear, reconnaissance and surveillance systems. Crews assigned to the submarine were sworn to secrecy.

By the end of the 1970s, the USS Parche had made multiple trips in the Sea of Okhotsk to wiretap Soviet communication cables as part of Operation Ivy Bells. The submarine assisted with recovering the fragments of Soviet anti-shipping rockets so the Navy could analyze them and develop countermeasures to safeguard its own vessels. After multiple overhauls to beef up surveillance equipment in the 1980s and 1990s, she was decommissioned in 2004.

Asbestos was used in the 1970s in submarine building, putting anyone at risk for asbestos-related diseases who worked on those vessels for decades to come. Submarine builders and crewmembers had the potential to develop mesothelioma due to their work with USS Parche.

The SS Exchequer marked a major accomplishment for Ingalls Shipbuilding. She was the first ship with an all-welded steel hull. She was acquired by the Navy in 1940, converted into a seaplane tender and renamed USS Pocomoke.

She received two battle stars for World War II service. During WWII, she was stationed at Argentia, Newfoundland, where she tended two patrol planes that scouted for German U-boats that threatened convoys carrying war material to England.

She made several trips to deliver cargo, as well as operating in the Pacific tending seaplanes and transporting troops, supplies and ammunition. Decommissioned on July 10, 1946, the Pocomoke was struck from the Naval Register on June 1, 1961. She was sold for scrapping that same year to Union Minerals and Alloys Corp.

From the time the SS Exchequer/USS Pocomoke was built in 1939 to the time she was scrapped in 1961, asbestos was used heavily in shipbuilding. Shipyard workers and crew members were at risk of developing asbestos-related diseases such as mesothelioma.

Asbestos Use at Ingalls Shipyard

Ingalls Shipyard has been very active since 1938. During these decades, asbestos use was very common. At Ingalls Shipyard, asbestos was used as insulation in walls, boilers, incinerators and around pipes. As a result, workers came in contact with many products that put them at risk of asbestos-related diseases.

Employees and visitors of Ingalls Shipyard are at risk of developing asbestos diseases such as mesothelioma and asbestos cancer. If diagnosed, such individuals have several legal options for compensation.

Another viable company, Goulds Pumps, Inc., wrongfully exposed shipyard workers to asbestos through their pumps. Goulds Pumps was acquired by ITT Industries, Inc. in 1997 but continues to operate as a wholly-owned subsidiary of ITT Industries.

Some victims have filed successful lawsuits against these companies.

A 79-year-old former engineer designed firing cut-out systems for missiles and guns on surface crafts for the United States Navy. He was frequently aboard ships during overhaul at Ingalls Shipyard and worked topside and below deck on weapons systems. His work brought him into close contact with insulators, laggers, electricians, plumbers and pipefitters. These workers installed and ripped out asbestos-containing products as part of their daily work, exposing him to asbestos dust.

Wrongful asbestos exposure and the resulting lawsuits have contributed to more than 100 companies filing for bankruptcy in the last 20 years. As part of the bankruptcy process, many asbestos companies created trust funds. Asbestos trust funds provide compensation for current and future victims of asbestos-related conditions.

As part of their job duties, many shipyard employees came into contact with asbestos. Shipyard workers who developed an asbestos-related disease are eligible to file a claim with the product manufacturer’s trust.

The following companies provided asbestos products to Ingalls Shipyard. After facing many asbestos lawsuits and exposing innocent people to asbestos, these companies filed for bankruptcy and created trusts to pay victims. If an individual worked at Ingalls Shipyard and developed a disease such as mesothelioma, they may be able to file a claim against these companies’ trusts.