On January 29, 2021, the U.S. Geological Survey (USGS) released its annual Mineral Commodity Summaries. The report shows that while United States imports of asbestos have significantly decreased since the 1980s, there was a 74% increase in imports between 2019 and 2020.

Asbestos is a harmful mineral used for decades in a variety of industrial and commercial products. In the 1980s, recognizing the associated health risks, the U.S. passed strict asbestos regulations. However, the government has not fully banned the mineral. It is still imported for certain uses and is present in older machinery and buildings.

In December 2020, the Environmental Protection Agency (EPA) completed an asbestos risk evaluation. The evaluation report describes asbestos as an “unreasonable risk” to humans. Following the release of the report, the EPA started the process to address these risks. The agency will propose corrective actions by the end of 2021. This could include heavier restrictions to better protect consumers and workers.

The Mineral Commodity Summaries report covers 90 different minerals, including asbestos, found or imported in the United States. The report summarizes usage data from the past five years.

The Mineral Commodity Summaries report shows the metric tons of chrysotile imported into the U.S. 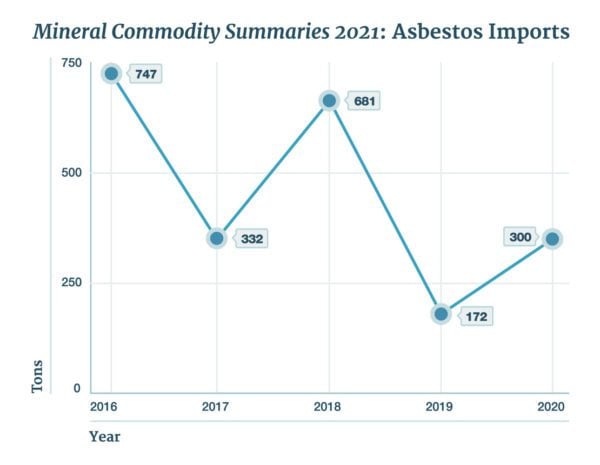 Due to legal restrictions, the amount imported has significantly dropped over the years. At its peak, in 1973, the U.S. consumed 803,000 metric tons of asbestos.

The U.S. also imports an unknown number of products containing asbestos, such as gaskets and vehicle parts.

The evaluation began after an amendment to the Toxic Substances Control Act (TSCA) in 2016. Congress directed the EPA to begin evaluations on 10 hazardous substances within six months. According to the amendment, if the evaluations found unreasonable health or environmental risks, the EPA must then enact restrictions to address those risks.

The evaluation of asbestos determined the mineral poses an unreasonable risk to human health. The EPA then moved into the risk management stage. By the end of 2021, the agency will propose actions to protect consumers, workers and other bystanders. The public can participate by commenting on these proposed actions before they are finalized in 2022. The agency’s future actions may impact the future of U.S. asbestos imports.

Asbestos is a naturally occurring, fibrous mineral that is fire-resistant, durable and cheap. Because of this, it was mined and used globally for decades in many industries. It was commonly used in construction, the automobile industry and shipbuilding.

Asbestos is also a known human carcinogen. In the 1970s, the U.S. government began restricting the use of asbestos to protect workers and consumers. The last U.S. asbestos mine closed in 2002. However, raw asbestos and asbestos-containing products are still imported into the country. Older buildings and products can also contain legacy asbestos in places such as roofing, wall insulation and ceilings.

Asbestos is safe if left undisturbed. However, remodeling and repair projects can disturb asbestos and release the fibers into the air. The fibers can then be inhaled or swallowed. This can cause a number of asbestos-related diseases many years later, including mesothelioma and asbestosis.

While anyone near areas with disturbed asbestos is at risk, some occupations risk exposure much more often.

Early detection of mesothelioma can lead to more available treatment options for the patient, but research is ongoing to improve prognosis. If asbestos exposure is suspected, individuals should discuss any symptoms they experience with their doctors. Their doctors can help monitor for asbestos-related diseases and aid early detection.

After a mesothelioma diagnosis, patients may be eligible for financial compensation to help cover medical bills, lost income and more. An experienced lawyer can help explain an individual’s legal options and handle the process of filing a claim.

For years, there has been demand for a full asbestos ban in the United States. More than 60 other countries already have an asbestos ban in place. This has been met with strong opposition, primarily from some industry leaders.

However, the TSCA amendment gives the EPA more authority to protect public health. The agency is expected to enact stricter restrictions to fully address all risks found in the evaluation. The results of the agency’s asbestos evaluation may lead to tightened regulations for the import, sale and disposal of asbestos. This could mean better, more comprehensive laws for consumer protection and worker safety.