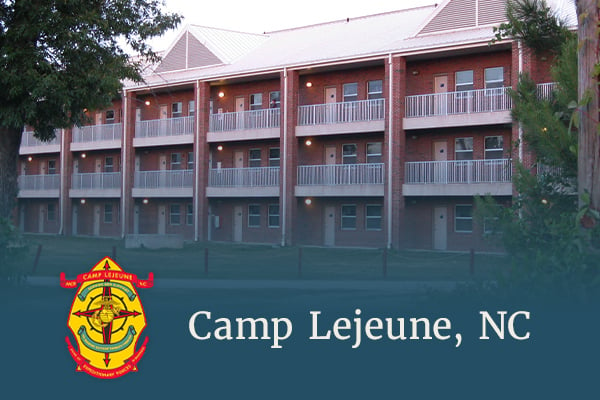 For several decades, Camp Lejeune was the site of hazardous water contamination.

Records from the Environmental Protection Agency (EPA) and the Agency for Toxic Substances and Disease Registry (ATSDR) show Camp Lejeune’s drinking water was contaminated from August 1953 to December 1987.

The contamination was discovered in 1980 during water sampling at the base. However, action was not immediately taken.

Between November 1984 and February 1985, ten water wells at Camp Lejeune, including the well tested in July 1984, were shut down. All wells known to contain harmful chemicals at Camp Lejeune were taken out of commission by 1985.

A public statement on the contamination at Camp Lejeune was not made until 1997.

“Volatile organic compound (VOC) levels in three base drinking water systems (Tarawa Terrace, Hadnot Point and Holcomb Boulevard) were a health concern until 1985 when use of contaminated wells stopped. Well contamination was caused from leaks in off-base and on-base underground tanks that were installed in the 1940s and 1950s. Human exposure to trichloroethylene (TCE), tetrachloroethylene (PCE), and 1,2-dichloroethylene (DCE) in drinking water systems at MCB Camp Lejeune have been documented over a period of 34 months, but likely occurred for a longer period of time, perhaps as long as 30 years.”

Camp Lejeune’s water is safe to drink today and has been for several decades. Officials shut down the base’s most contaminated wells in 1985 and the water has been shown to be safe since 1987.

Marine Corps, EPA and ATSDR records show the drinking water was contaminated between August 1, 1953, and December 31, 1987. Individuals who were present at the base for 30 or more days during this window may have experienced harmful exposure. This exposure could have led to a related disease.

Benzene is a chemical often used in manufacturing as a starter material. That means businesses may use it to make other chemicals, dyes, lubricants, plastics and more. Crude oil, gasoline and car exhaust fumes all contain benzene. It has a slightly sweet odor and is either clear or has a slight yellow tint. It also tends to float on top of water.

Benzene can be harmful to people. The EPA has set the benzene exposure limit to 5 parts per billion (ppb). When found at Camp Lejeune, it measured 380 ppb. There are negative health effects for short-term and long-term exposure.

The International Agency for Research on Cancer has labeled benzene as a known carcinogen. Studies show that people exposed to benzene have higher rates of leukemia.

What Is Tetrachloroethylene (PCE)?

Tetrachloroethylene is also called perchloroethylene (PCE). It is a chemical often used as a dry cleaning agent or a degreasing solvent. Some industries may use it to make other chemicals. Various consumer products, like adhesives, carpet cleaners, fabric spot cleaners and automobile lubricants, may contain PCE.

The EPA sets safe levels of PCE in the water at 5 ppb. However, the PCE at the Tarawa Terrace treatment plant hit 215 ppb at its highest level.

What Is Trans-1,2-dichloroethylene (DCE)?

Trans-1,2-dichloroethylene (DCE) is a colorless chemical with a strong odor. It is a highly flammable liquid often used as a solvent for resins and waxes. Additionally, it may be used to remove oils and fats from fish and meat and to manufacture pharmaceuticals.

Experts know only a little about how low-level exposure to DCE may affect people. But the CDC says that high levels of DCE may have some side effects, and breathing in high levels of it can be fatal.

The maximum allowable amount is 7 ppb, but scientists at the Hadnot Point facility recorded the levels at 407 ppb in 1985. The EPA does not classify DCE as a carcinogen. Still, exposure can lead to health problems.

What Is Trichloroethylene (TCE)?

TCE is a chemical often used to clean grease from metal parts. Several industries use it for various purposes. For example, some dry cleaners have used it as a cleaning agent. Other uses include adding it to adhesives, paint, varnishes, paint strippers and similar substances. TCE evaporates quickly and has a sweet odor.

Doctors once used TCE as an anesthetic for surgery, but this use was banned in 1977. Like the other VOCs found at Camp Lejeune, it has proven to be toxic to people. High levels of exposure to TCE can be fatal. While breathing in TCE is less harmful than drinking it, people should avoid it regardless.

The maximum contaminant level for TCE set by the EPA is 5 ppb. But the water at Camp Lejeune tested at 1,400 ppb.

What Is Vinyl Chloride?

Vinyl chloride is a man-made chemical used to make ​​polyvinyl chloride (PVC), a type of plastic. It is an odorless gas at room temperature but can become a liquid when it becomes very cold. Vinyl chloride is also heavier than air, meaning it sinks to the bottom of poorly ventilated rooms when it is a gas.

Vinyl chloride is a known carcinogen, meaning it can cause cancer. The EPA found this toxic chemical in more than 600 of the 1,662 National Priority List sites. These locations are some of the most hazardous waste sites in the country. Because vinyl chloride is nearly undetectable in smaller amounts, most people don’t notice the toxin until after they have already had too much exposure.

The EPA has set the safe maximum contaminant level of vinyl chloride at 2 ppb. The highest level recorded on base was 67 ppb.

Researchers traced the VOCs in the drinking water at Camp Lejeune to three of the eight treatment plants on base. The contamination mainly impacted residential areas. Housing areas affected by the contaminated water included:

Individuals who lived, worked or served in any of these locations may have been exposed to harmful chemicals. They may be eligible for compensation if they were: 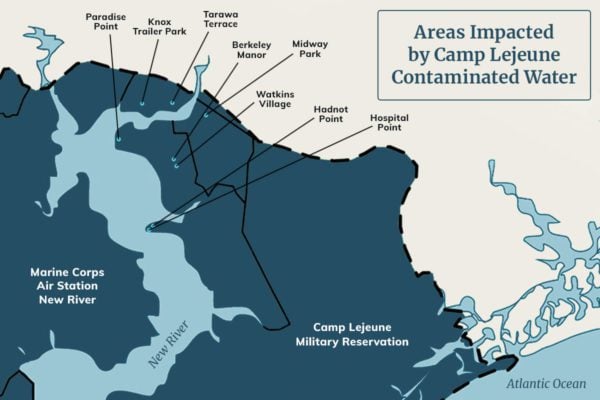 Areas where drinking water systems were not contaminated include Courthouse Bay, New River, Camp Geiger, Camp Johnson and the Rifle Range. Victims of contaminated water exposure at Camp Lejeune may be eligible for compensation even if they were not assigned to a site with water contamination.

We’ve been helping veterans for over 40 years. Let us help you with your Camp Lejeune Contaminated Water Case Evaluation.
Get Started

Researchers traced the drinking water contamination at Camp Lejeune to a few of the base’s water supply plants. The affected plants were:

These plants received water from dozens of groundwater wells around the base.

The water at Tarawa Terrace water treatment plant was initially contaminated by an off-base dry cleaner called ABC One-Hour Cleaners. The cleaner improperly disposed of PCE, which made it into the soil and groundwater, directly affecting Camp Lejeune.

TCE was the main contaminant at Hadnot Point. In May 1982, TCE levels in Hadnot Point water were recorded at more than 200 times the acceptable level.

The most contaminated wells served by the Hadnot Point plant were shut down by February 1985.

This plant’s water was generally not contaminated. However, on occasion, contaminated water from the Hadnot Point treatment plant was used intermittently for various reasons.

Windows of contamination for areas served by the Holcomb Boulevard plant include:

05. Cancer and Other Injuries

The United States Government has acknowledged that water contamination at Camp Lejeune adversely impacted the health of Marine Corps veterans and others who lived at or spent time on base.

This contaminated water has been linked to an increased risk of various conditions. This includes several types of cancer, birth defects and other illnesses.

People who have been diagnosed with one of the above illnesses, or another illness, may be entitled to receive compensation for their injuries.

Asbestos was commonly used at military bases until the 1980s. The mineral’s durability and heat resistance made it useful in many construction materials. Products like insulation, HVAC systems and flooring tiles often contained asbestos. As a result, people present on military bases may have been exposed to the mineral.

Asbestos exposure during military service is a primary cause of mesothelioma cancer.

Who Is Eligible for Financial Compensation?

Veterans, residents and workers at Camp Lejeune have been exposed to asbestos or harmful chemicals in drinking water. Those who develop an associated cancer or other health condition may be eligible for compensation.

Veterans, family members (including those in utero) and workers at Camp Lejeune may have been exposed to harmful chemicals in their on-base drinking water. To qualify for compensation, individuals must have:

Those who are eligible may be able to receive compensation for their injuries. Even those who have already received benefits for injuries sustained at Camp Lejeune may qualify for further compensation.

When was the water contamination at Camp Lejeune discovered?

The first tests showing harmful chemicals in Camp Lejeune’s water were conducted in 1980. However, for many years the contamination was not addressed. The contaminated wells were shut down in the mid-1980s. Further testing revealed that the water contained harmful chemicals for over three decades.

What do I do if I have a disease related to Camp Lejeune water contamination?

Anyone who has developed cancer or another illness related to Camp Lejeune’s contaminated water should contact a lawyer. Experienced attorneys can help Camp Lejeune victims receive the compensation they deserve.

Was there asbestos at Camp Lejeune?

There was asbestos present at Camp Lejeune. Asbestos was often used to construct and maintain military bases around the country before 1980. It was often used in building materials such as insulation, roofing and flooring.

Water coming from the different treatment plants at Camp Lejeune is currently safe. The water is tested more frequently than required to ensure it meets government standards. Beyond routine water testing, Camp Lejeune ensures the base follows proper waste management regulations and cleans up past hazardous wastes.

What are the symptoms of Camp Lejeune’s water contamination?

Symptoms from contaminated water vary depending on the illness or injury. Symptoms common among these diseases include weight loss, fatigue, weakness, fever and loss of appetite. This is not an exhaustive list. If you or a loved one think you may have developed a condition from the toxic water at Camp Lejeune, seek medical advice.

What if I wasn’t assigned to or did not live in a contaminated area?

You may still be eligible for compensation even if you weren’t assigned to a contaminated area or did not reside there. Veterans and their families may have spent 30 days or more in contaminated areas for a number of reasons including, but not limited to, training, schooling and recreational activities.