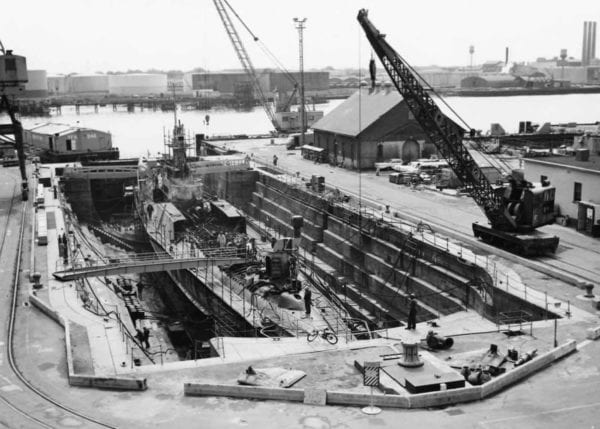 Located in Portsmouth, Virginia, the Norfolk Naval Shipyard was established in 1767 under the name Gosport Shipyard. At that time, the shipyard was under the British flag. The shipyard was taken over by the Colony of Virginia during the American Revolution and was renamed “Norfolk” in 1862.

The Norfolk Naval Shipyard assisted the nation in winning nine major wars, putting an end to piracy, sending the Great White Fleet around the world, scientifically exploring the Pacific and opening Japan to American trade. Shipbuilding was part of the work done in the shipyard until 1953.

During the Korean War, the shipyard completed work on more than 1,250 naval vessels and built two wooden minesweepers. In 1965, it attained nuclear technology capability when USS Skate II became the first modern submarine to undergo a major overhaul there.

Many workers at Norfolk Naval Shipyard were potentially exposed to asbestos. Workers’ loved ones may have also experienced secondhand exposure. As a result, many people developed asbestos-related diseases, such as asbestosis, asbestos lung cancer, and pleural and peritoneal mesothelioma. People who developed an asbestos-related disease may be eligible for compensation.

During WWII and the Korean War, thousands of ships were built and repaired at the Norfolk Naval Shipyard. Many of these ships contained a wide variety of asbestos-containing products and materials.

The USS Alabama was a battleship that served in WWII beginning in 1943 in the North Atlantic and ending in the South Pacific. On September 5, 1945, she led the American Fleet into Tokyo Bay. She received nine Battle Stars for meritorious service during her tenure.

The USS Alabama was decommissioned in 1947 and was to be scrapped as of 1962. However, the citizens of Mobile, Alabama, wanted the ship to be an attraction of their Veterans Memorial Park and on January 9, 1965, she was opened to the public as a part of the park. The ship was also used in the 2016 film USS Indianapolis: Men of Courage starring Nicolas Cage.

Asbestos was used heavily on ships and in shipyards during WWII, putting the workers and crewmembers of the USS Alabama at great risk of developing asbestos-related diseases such as mesothelioma.

The USS Skate II was a nuclear submarine that was launched and laid down in Connecticut. In 1958, she spent time in the Arctic where she operated under the ice for ten days. She surfaced nine times through the ice, navigated more than 2,400 miles under it and became the second ship to reach the North Pole.

After various port calls in Europe and going back to her homeport, she headed back for the Arctic in 1959 to pioneer operations during the period of extreme cold and maximum ice thickness. She traveled 3,900 miles under the ice, surfacing through it ten times. For this, she was awarded a bronze star. She returned to the Arctic several times after that mission.

The USS Skate II spent time at Norfolk Naval Shipyard in 1965 for an overhaul and installation of the SUBSAFE package and again in 1971 for her third regular overhaul. The USS Skate II was decommissioned on October 30, 1986.

The USS Skate II was built, operated and overhauled at a time when asbestos was used regularly in shipyards and on ships and submarines. This put civilians and Navy workers at risk of asbestos-related diseases such as mesothelioma.

Asbestos Use at Norfolk Naval Shipyard

Norfolk Naval Shipyard was an active worksite since 1767 with the most activity during WWII, when asbestos was also commonly used on ships. Workers at Norfolk Naval Shipyard used asbestos as insulation in walls, around pipes, in boilers and elsewhere on ships. As a result, workers came in contact with many products that put them at risk of asbestos-related diseases.

Shipyards were staffed by military personnel and civilians. Because asbestos use in shipyards was so common, veterans of the U.S. Navy were frequently exposed. However, anybody who worked at Norfolk Naval Shipyard from the 1930s through the 1980s was at high risk of exposure and could develop malignant mesothelioma cancer.

Anyone who serviced frigates, minesweepers, battleships, cruisers and submarines faced a similar risk. Frequent use and a lack of ventilation on ships made asbestos exposure commonplace. For example, construction and maintenance workers were exposed when working in boiler rooms.

People who worked on ships at Norfolk Naval Shipyard are at risk of developing asbestos cancer or other related diseases. After a diagnosis, these shipyard workers have compensation options.

Victims can be compensated by the companies that exposed them to asbestos. Their compensation options depend on the status of that company. Victims can work with a mesothelioma lawyer to secure payment from a lawsuit, settlement, trust fund and/or VA claim (or a combination of these types of claims).

Some companies that produced asbestos products are still viable. This means the company hasn’t filed for bankruptcy. Thus, individuals can file lawsuits against that company. These lawsuits could end in verdicts or settlements.

Hopeman Brothers, Inc., a ship carpentry company, manufactured asbestos-filled panels for shipbuilding. This put carpenters and anyone else who worked on the ships or shipyards at risk of developing asbestos-related diseases such as mesothelioma.

Another viable company, Cleaver-Brooks Company, wrongfully exposed people to asbestos at Norfolk Naval Shipyard through their boilers. This exposure put workers and crew members at risk of asbestos-related diseases.

As a result, victims filed successful lawsuits against these companies.

Dates of Asbestos Exposure at Norfolk Naval Shipyard: 1966 to 1970

A 66-year-old boilermaker at Norfolk Naval Shipyard performed work on various ship boilers, high-temperature equipment and component parts. His work exposed him to asbestos-containing materials including insulation, insulating materials, gaskets, refractory and mortar on a daily basis for four years.

The following companies provided asbestos products to Norfolk Naval Shipyard. After facing many asbestos lawsuits and exposing innocent people to asbestos, these companies filed for bankruptcy and created trusts to pay victims. If an individual worked at Norfolk Naval Shipyard and developed a disease such as mesothelioma, they may be able to file a claim against these companies’ trusts.