Patients in Charlotte, North Carolina, may seek cancer treatment from specialized mesothelioma cancer centers outside of the city. There, experienced mesothelioma doctors can put together unique treatment plans for the patients.

Once a personalized treatment plan is created, patients may receive chemotherapy or other mesothelioma treatments at hospitals in the Charlotte area. 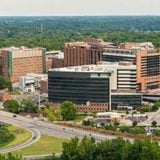 By seeking treatment at specialized cancer centers, patients can receive treatment from mesothelioma doctors experienced in treating the rare cancer. Doctors may recommend a variety of treatment options based on a patient’s unique case. For instance, they may recommend surgery, chemotherapy and/or radiation therapy.

If you were exposed to asbestos in North Carolina at a commercial, residential or military site and have been diagnosed with mesothelioma, you may be entitled to compensation. There have been many asbestos lawsuits and claims filed by individuals in the Charlotte area. A number of lawsuits are filed against asbestos companies in the area.

Employees and their families file lawsuits and claims against the companies to gain compensation for lost wages, medical expenses and pain and suffering. Some asbestos victims may also file:

Individuals may contact a mesothelioma law firm to determine the most beneficial legal option.

Finding a Lawyer or Law Firm in Charlotte, North Carolina

Charlotte, North Carolina, residents who developed an asbestos illness may be eligible to file a lawsuit. Working with an experienced asbestos law firm ensures patients and their families have the best chance of receiving compensation. Several law firms serve North Carolina asbestos victims.

Statutes of Limitations for Charlotte

Many Charlotte residents with an asbestos-related disease have filed successful claims. A successful claim may result in a jury award or settlement. Compensation from a mesothelioma settlement may help patients and their families pay for treatment, travel expenses and lost wages.

Examples of clients served in the greater Charlotte area include:

04. Asbestos Use in Charlotte

Asbestos Use in Charlotte, North Carolina

In the mid-1900s, Charlotte was an industrial leader of the southeast. As industries grew, many facilities began using asbestos-containing machinery. Companies commonly used asbestos for fireproofing and durability from the 1930s to the 1980s.

In Charlotte, several companies produced asbestos-containing products during these years. These facilities operated in:

Chrysotile asbestos was commonly used in the area and may still be found in Charlotte. North Carolina residents exposed to asbestos fibers may develop related diseases, such as mesothelioma, lung cancer or asbestosis.

Carolina Asbestos Corp. produced asbestos materials from the 1930s to the 1960s. The company was located in Davidson, North Carolina. The suburb is 23 miles outside Charlotte.

While operational, the company dumped asbestos waste on the property. This improper disposal of asbestos led to continued exposure for the community. In 2016, the Environmental Protection Agency (EPA) investigated the warehouse and surrounding area.

Impacts of Past Asbestos Use on the Davidson Community

Although the Carolina Asbestos Corp. stopped operations in the 1960s, the Davidson community continues to risk asbestos exposure. The company didn’t dispose of asbestos materials properly. As a result, there was asbestos-contaminated waste runoff into the surrounding residential area.

After the EPA’s investigation, the agency led cleanup efforts. The EPA believes the disturbed asbestos-contaminated area is a result of erosion and burrowing animals. In 2016, soil testing done on the Carolina Asbestos Corp. property found material was up to 70% asbestos.

The asbestos levels within the soil in the area were so high homeowners were instructed not to dig in their yards for fear of exposure.

Before the cleanup, the EPA sampled 77 properties near the factory to test for asbestos. More than 30 of the properties had asbestos-contaminated soil removed.

To protect citizens from further exposure, the EPA cleanup included installing a plastic liner, clean earth and a fiber mat. The state and property manager will continue to monitor the area and make repairs as needed.

Davidson residents, children and visitors may have also experienced exposure as a result of the Carolina Asbestos Corp. In January 2020, asbestos was found during an environmental assessment at Roosevelt Wilson Park in Davidson.

The town stated it is following the North Carolina Department of Health and Human Services’ recommendations to restrict access to areas testing positive. However, all other areas remain open to the public, including the play structures and restrooms within the park.

Any Davidson resident exposed to asbestos-contaminated materials or soil may be at risk of developing mesothelioma or another illness.

Greenville was a predominantly African American neighborhood in Charlotte. The area was home to the Southern Asbestos Company Mills. The facility was built in 1904 as a cotton mill but began making asbestos fabric in 1920.

Thereasea Delerine Clark Elder grew up on Hamilton Street, where the Southern Asbestos Company Mills facility was located. She recalls having to clean the screens and doors twice a day during the summer because of white asbestos dust. She also played in an asbestos waste dump as a child.

Thereasea became a nurse after seeing the impacts of asbestos exposure on the community. Two of her siblings passed away before the age of three, and Thereasea also has lung scarring related to her past asbestos exposure.

Learn More About Thereasea and Her Experiences With Asbestos

The neighborhood was demolished and rebuilt as part of an urban renewal project. Some residents believe this was done to spread out those harmed by living near the asbestos site.

Employees at various sites, workers in various industries and homeowners in the Charlotte area may all have experienced asbestos exposure.