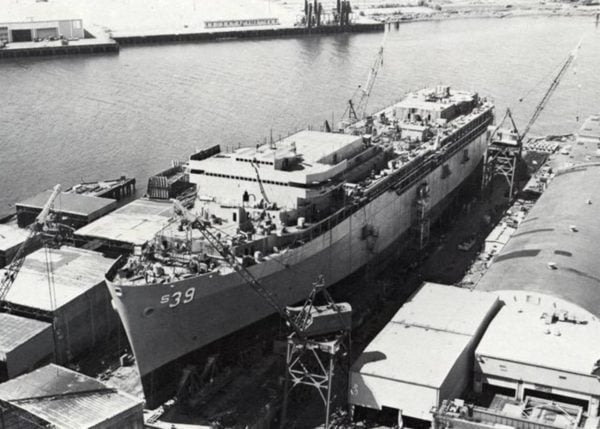 Lockheed Shipbuilding was located on Harbor Island, Seattle, Washington, from 1959 to 1988.

The shipyard was originally founded in 1898 as the Puget Sound Bridge & Dredging Company. In 1959, Lockheed Shipbuilding & Construction Company bought the yard. The shipyard built several different types of ships for the U.S. Navy, U.S. Coast Guard and the states of Alaska and Washington. However, ship construction ended in 1988, when Lockheed began losing business to Avondale Shipbuilding.

Harbor Island, including the location of Lockheed Shipbuilding, was declared a Superfund site. By 2020 much of the island had been cleaned up. Today, Harbor Island houses businesses, including a 117,000-square foot sound stage and a marina. The businesses on the island are mostly industrial and there are no residences.

Many workers at Lockheed Shipbuilding were potentially exposed to asbestos. Workers’ loved ones may have also experienced secondhand exposure. As a result, many people developed asbestos-related diseases, such as asbestosis, asbestos lung cancer, pleural mesothelioma and peritoneal mesothelioma. People who developed an asbestos-related disease may be eligible for compensation.

During its short history, Lockheed Shipbuilding built a wide variety of military and commercial ships. Many of these ships served in the Vietnam War, including the USS Schofield and USS Juneau.

USS Schofield, a guided-missile escort ship, was laid down at Lockheed Shipbuilding in 1963. In 1969, she had her first deployment for the Vietnam War. She returned to Vietnam in 1971, where she supported training exercises in between her war duties.

After an overhaul in 1971 and 1972 at Long Beach Naval Shipyard, she returned for her third deployment to Vietnam. This deployment included her first active battle duties. The ship received four battle stars for her efforts during the war.

During her construction, overhauls and Vietnam deployments, asbestos would have been used onboard the USS Schofield. This asbestos use put workers and crew at risk of developing mesothelioma.

The USS Juneau was an amphibious transport dock that was laid down at Lockheed Shipbuilding in 1965. Also known as “Mighty J,” USS Juneau had five deployments during the Vietnam War.

In 1989, she assisted with the Exxon Valdez oil spill in Alaska. She participated in Operation Desert Storm in 1990. USS Juneau was decommissioned in 2008.

At the time USS Juneau was constructed, asbestos was used heavily in shipbuilding. Anyone who worked on construction and repairs may have been exposed to asbestos. Those who served aboard the amphibious transport dock are also at risk of developing an asbestos-related disease.

Asbestos Use at Lockheed Shipbuilding

Lockheed Shipbuilding was in operation from 1959 to 1988. Asbestos use was common during this timeframe. The dangerous mineral was often present in items such as boilers, incinerators, insulating materials and other elements of ships. This means people who worked in shipyards have a high risk of asbestos exposure and of developing asbestos-related diseases.

Maintenance workers on destroyer escorts, oilers, assault ships, roll-on/roll-off ships, ammunition ships and submarine tenders faced the same risks. Poor ventilation on ships combined with pervasive asbestos use made exposure common. For example, plumbers and pipefitters were exposed through the normal duties of their jobs.

Workers who installed and repaired pipes and plumbing were at risk of asbestos exposure. The dangerous mineral was often used to insulate plumbing fixtures throughout ships. Any time the material was disturbed, workers faced a risk of inhaling asbestos fibers.

Asbestos use all but stopped before the 1980s. However, people can still be exposed at shipyards when working on ships maintained or built before 1980. Various shipyard duties, including sanding or sawing pipes for installation, exposed shipyard workers to asbestos.

Shipyard workers, veterans and visitors of Lockheed Shipbuilding are at risk of developing mesothelioma, asbestos cancer or another asbestos illness. Those diagnosed have several claim options to receive financial compensation.

Hopeman Brothers, Inc., a ship carpentry company, manufactured asbestos-filled panels for shipbuilding. This put carpenters and anyone else who worked on the ships or shipyards at risk of developing asbestos-related diseases such as mesothelioma.

Another viable company, Cleaver-Brooks Company, wrongfully exposed people to asbestos at Lockheed Shipbuilding through their boilers. This exposure put workers and crew members at risk of asbestos-related diseases.

As a result, some of these victims have filed successful lawsuits against these companies.

A union ship scaler spent four years at Lockheed Shipbuilding. His duties required him to tear out and remove asbestos-containing insulation from ships that were being overhauled and repaired. He worked near others performing insulation tear-out, including pipefitters, welders, shipfitters and machinists. This work created large quantities of asbestos dust that adhered to his clothing. His wife would shake out and launder his work clothes, exposing her to asbestos dust which she breathed in.

Shipyard workers developed asbestos-related diseases after working with asbestos products. One compensation option for these individuals is to file a claim with that asbestos company’s trust.

The following companies provided asbestos products to Lockheed Shipbuilding. After facing many asbestos lawsuits and exposing innocent people to asbestos, these companies filed for bankruptcy and created trusts to pay victims. If an individual worked at Lockheed Shipbuilding and developed a disease such as mesothelioma, they may be able to file a claim against these companies’ trusts.