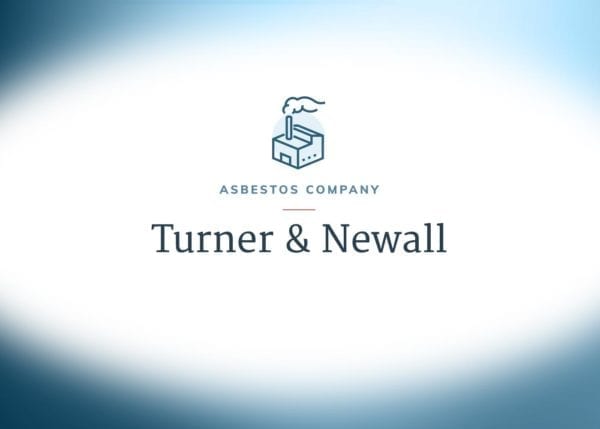 Turner & Newall History of Asbestos Use

Turner & Newall saw success shortly after being founded. The company started in the cotton-manufacturing and cloth-based packaging industries. The Turner brothers were able to weave asbestos fibers into cloth, becoming the first company in the United Kingdom to do so. As a result, they saw growing success, causing them to dub their company Turner Brothers Asbestos Company in 1879.

The company continued to expand its offering and its reach into other industries, opening an asbestos cement manufacturing plant in Trafford Park before World War I. This plant developed one of their most well-known products, Trafford tile asbestos cement sheets. Thanks to their expansion, Turner Brothers Asbestos Company merged with Washington Chemical Company, Newall’s Insulation Company and J. W. Roberts in 1920. With the merger, the company changed its name to Turner & Newall.

Despite taking asbestos out of the company’s name, Turner & Newall remained committed to utilizing the toxin in their manufacturing process. They continued to expand their product line and increased the number of factories to meet demand. In 1934, the company further expanded its reach in the United States by buying the asbestos manufacturer Keasbey and Mattison Company, which produced asbestos construction materials and automotive parts. Though Keasbey and Mattison Co. were allowed to maintain their name, reports note that Turner & Newall operated with full control of the plant until Certainteed bought them out in 1962.

Employees at Turner & Newall were regularly X-rayed. Those who showed signs of asbestos disease were moved to jobs that were “less dusty,” though were not given a reason for the change.

By this point, the dangers of asbestos were becoming more well known. In 1955, a study was conducted in Rochdale that proved the link between asbestos and cancer. Turner & Newall did not want the study to be published and eventually had their own scientist publish a paper to discredit the study.

During these years, more historical mesothelioma studies documented health concerns around the use of asbestos, and a growing number of workers developed diseases and spoke out. However, Turner & Newall continued to use the mineral in production until the 1970s. Around this time, the company began to see a decline and was later purchased by an American company, Federal-Mogul, in 1998.

Because of their widespread and consistent asbestos use in their products, Turner & Newall is noted as having been one of the largest asbestos conglomerates in the world.

Because of their various acquisitions and booming business, Turner & Newall was frequently expanding its product line. Regardless of the new industries they entered with their products, Turner & Newall frequently incorporated asbestos to add durability and fireproofing.

One of the products made by Turner & Newall that contained asbestos was Limpet Spray, a spray used for structural fireproofing, acoustical ceiling treatments and insulating turbines and other heat-generating equipment. The company also manufactured Tafford tile asbestos cement sheets, a product used in the walls and roofing of industrial and agricultural buildings.

People who worked at Turner & Newall’s factories up until the 1970s recall being completely surrounded by asbestos dust. According to one news report, measurements taken outside the factory’s roof in 1950 and 1957 showed levels of asbestos dust between 18 and 60 particles per cubic centimeter. At the time, safe working levels for the company were supposed to be two or three particles per cubic centimeter. Workers recalled regularly sweeping asbestos dust off the floor and even spitting the substance out of their mouths.

People living in the area around the Rochdale and other factories also faced asbestos exposure. Reports state that residents used to joke about having frost all year in the 1950s. The local woods were nicknamed “snow trees,” as fine asbestos dust coated everything.

Since T&N’s materials were used across the United Kingdom, as well as other countries, countless people have potentially been exposed and are at risk of developing mesothelioma.

Following her passing, Nellie’s family sought retribution against Turner & Newall. However, the company refused any liability and would not offer any financial assistance toward funeral expenses. Reports show that Nellie herself had even reached out to the company while sick, wondering what they would do about her case and lack of income.

In more recent years, Turner & Newall has faced thousands of lawsuits and been held accountable for its wrongdoings. In a 2014 lawsuit, T&N had to pay a verdict of $9.3 million to the widow of a pipefitter. John Lydon’s claim explained that he was frequently exposed to the company’s Limpet spray insulation through the 1960s. Lydon later developed mesothelioma and passed away. If you believe you or a loved one was exposed, learn how a mesothelioma lawyer can help.

Turner & Newall’s asbestos use has impacted hundreds of thousands of people in the United Kingdom, United States and many other countries. Reports show the company grew from 5,000 employees in 1926 to 40,000 by 1961, and continued to grow until sales began to decline in the 1970s. Throughout this growth, the number of asbestos claims continued to trickle in, with 21 claims of asbestosis in 1935, just nine years after Nellie Kershaw’s case.

Between 1930 and 1948, Turner & Newall already faced 140 claims from workers who developed asbestosis and sought compensation.

Federal-Mogul was aware of the large number of asbestos claims against Turner & Newall when it acquired the company in 1998 and set aside about $2.1 billion to cover litigation costs. However, the funds dwindled quickly as the number of claims filed against T&N continued to grow. Federal-Mogul filed for bankruptcy in 2001, leading to the formation of an asbestos trust fund to handle claims.

Questions About Filing a Claim Against Turner & Newall?

Turner & Newalls trust fund, which is a sub-fund of the larger Federal-Mogul Asbestos Personal Injury Trust, was formed in 2007 with initial funding of $635 million. For claimants impacted in the United Kingdom, there is also the T&N UK Asbestos Trust that is still operating and accepting claims for anyone impacted by T&N or one of the company’s subsidiaries.

Currently, the payment percentage for T&N claims through the Federal-Mogul trust is 8.5%, though payouts will vary for each claimant. Trust operators keep in mind factors like the claimant’s diagnosis, exposure and age when determining compensation amounts, as well as the law firm’s settlement history.

Those impacted by T&N’s asbestos use can still receive compensation by filing a claim against the trust.